The weight listed in the table above is the rifle's unloaded weight. A loaded steambolt rifle weighs a total of 17½ pounds. 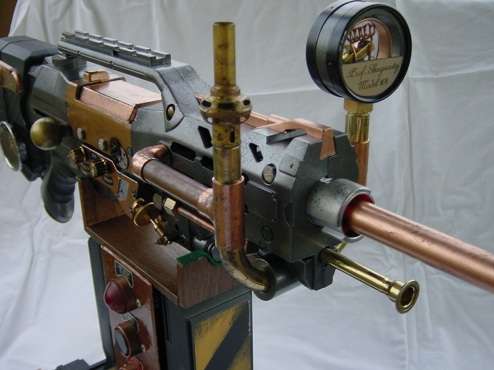 A steambolt rifle is a heavy duty weapon that propels a projectile at high speeds with the use of gunpowder contained in the projectile casing. The name of the rifle is derived from the system of ventilating tubes with which each issue is constructed, which mainly uses the gas expansion from the chamber explosion to warm the rifle's mechanism. In the cold reaches of the high North where steambolt rifles are manufactured, this internal heating was important to the continued functioning of the weapon under situations of arctic warfare.

Special: Steambolt rifles function properly under any temperature condition within the boundaries of an endure elements spell.

Additional Attacks: A steambolt rifle has a sturdy stock that can be used as a secondary weapon. Similarly, a blade is often mounted below the barrel that allows for thrusting stabs. The stock is an improvised club, dealing 1d6 damage with a crit of ×2, and the mounted blade is an improvised version of a punching dagger that deals 1d4 damage with a crit of ×3. Both of these attacks are standardly made at a -2 penalty.