The weight listed in the table above is the minigun's unloaded weight. A loaded steambolt minigun weighs a total of 65 pounds. 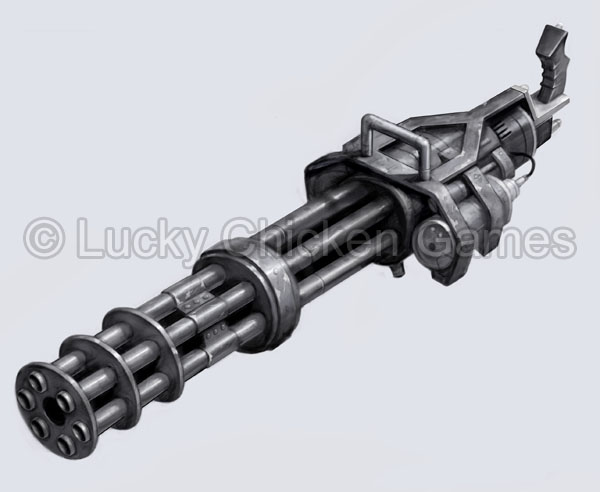 A steambolt minigun is a heavy, six-barreled weapon that shoots projectiles at an extreme rate of fire. It is belt-fed by an ammo belt magazine with a capacity of 200 cartridges.

Spinning the Barrel: In order for a steambolt minigun to reach its maximum firing rate, the barrels must rotate to facilitate the automatic fire mechanism. Spinning an idle barrel always requires a move action and is done with a secondary trigger. A minigun's barrels may be kept spinning even when not firing the weapon, but return to idle when the secondary trigger is released (such as when reloading).

Firing a Minigun: There are two ways to fire a steambolt minigun; as a standard action or as a full-round action. It's impossible to make a full attack action with a minigun.

Firing as a standard action expends 25 cartridges and deals 10d8 damage either in a 120-ft. line (by aiming straight) or a 60-ft. cone (by 'mowing'). Any creature caught in the area of effect may make a Reflex save against a DC of 10 + half your base attack bonus + your Dexterity modifier to halve the damage dealt.

Firing as a full-round action expends 50 cartridges, and deals 10d8 damage similar to using a standard action. However, creatures in the area of your fire must immediately make a move action at the start of their next turn to either find cover, break your line of effect to them, or escape the area of your fire. If they can't, they are dealt another 10d8 damage, Reflex half.

Special: If attacking in a line with a steambolt minigun, you may move up to half your speed in the direction of your fire while firing.

Using armor piercing cartridges in a minigun bestows a +1d8 bonus to damage per effective enhancement bonus (or +1d6 for the small variant).