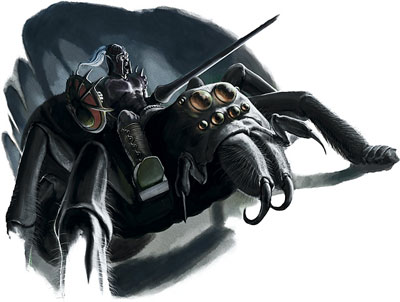 Spider riders are the chosen knights of the spider queens who wage a constant war against each other over mastery of the spiderkind for the spider queen that they sever and against those that are enemies of their spider queen. As masters of mounted combat, they excell at lightning fast charges and dart around their enemies at a speed few can match.

As a spider rider you are a master of riding and as a lord among spiderkind. You are a master of mounted combat, and can easily out maneuver almost any foe you face. You can dart in and out of combat with your trusty blade, or you could charge headlong into the melee with your lance, and worry about the consequences later.

Will you charge head on at your enemy, devastating them with a deadly attack, or will you dart in and out of combat with your sword, striking them down with swift attacks?

The swift rider and the brutal rider are the two spider rider builds, one relying on speed and precision, the other on brute strength. Dexterity, Charisma and Strength are the spider rider's most important ability scores.

You like powers that allow mobility so that you can out maneuver your foes easily. You dart in and out of the fray, dealing blows with amazing precision and dodging your foes attacks with amazing grace. Most of your attack powers rely on Dexterity, so that should be your best ability score. Charisma should be your second best, as it strengthens your bond with the arachania. Strength is useful if you want to use powers from the other spider rider build. You should select the swift charge tactic. Look for powers that take advantage of your high charisma score, as well as those that aid your speed and maneuverability.

You like powers that deal a hefty amount of damage, aided by your strength, and also damage your foes in other, nastier, ways. Your attacks use Dexterity, so keep that ability score as your highest. Strength should be a close second, as it increases your damage directly. As a third ability score, charisma works well, as it strengthens your connection to the the arachania. You should select the brutal charge spider rider tactic. Look for powers that deal large amounts of damage.

Spider Riders have a variety of different ways in which they defeat their foes. Some dart in and out of combat with unmatched precision and speed, others rely on brute strength.

Choose one of the following options:

Darting Charge: You gain a bonus to you deadly charge damage equal to your charisma modifier.

Brutal Charge: You gain a bonus to your deadly charge damage equal to your strength modifier.

The choice you make also provides bonuses to certain spider rider powers. Individual powers detail the effects (if any) your spider rider tactics selection has on them.

Once per round, when you charge against an enemy, your attacks against that enemy deal extra damage. The extra damage is based on your level. If you can make multiple attacks in a round, you decide which attack to apply the extra damage to after all the attacks are rolled.

You can speak the spydric language and can pinpoint the location of any spiderkind creature within 6 squares. Spiderkind creatures can understand anything spoken to them in spydric (regardless of Intelligence score) and can speak spydric themselves.

You have a loyal mount in spider form. The spider mount has the following game statistics.

Level: The spider's level is equal to your level.
Size: The spider is large size.
Type: The spider is a spiderkind Magical Beast [Spider]. Choose one of the following keywords at 1st level; araneidae, ctenidae, lycosidae, salticidae, scytodidae or theraphosidae. The spider gains that keyword (and is a spider of that species).

Hit Points: The spider does not have its own hit points. Instead, you and the spider share the same hit points. They take damage and heal as if they where a single creature. If one of you is killed, both of you are.

Healing Surges: The spider does not have healing surges; see above for details.

Defenses: The spider does not have defense scores (AC, fortitude, reflex and will) of its own. When an enemy wishes to attack the spider, that enemy must attack you and spider as if you were one character, using your defenses. If the attacker can only see and attack one of you, they still attack you and your spider as one creature.

Bond: You and the spider can communicate empathetically and telepathically and can see out of each other's eyes at all times.

Languages: The spider can speak any languages you can.
Vision: The spider has all vision qualities you do, and has tremorsense out to 6 squares.

Speed: The spider has a speed of 8 squares. The spider also has a climb speed equal to her land speed with the spider climb ability (you automatically fall out of your saddle if you are riding your spider and she is climbing on a wall or ceiling).

Attacks: The spider has a bite attack (Dexterity Vs. AC) that deals 1d8 damage.

Riding the spider: The following rules replace the normal rules for mounted combat where they conflict:

Spider rider powers are called weaves. In battle, spider riders draw upon the web of power that all spiders spawned from, the very strength of the spider queens. Using this power, spider riders can gain qualities of various species of spider to use against their foes.