This is an inherited template that can be applied to the base creature (it must be a base Monstrous Spider).

The Spider remains the same size. As monstrous Spiders are magically created (originally by Lolth and Arachne) you may change the type to Magical Beast (vermin). You must add the family name on the end in brackets, for example: Magical Beast (Vermin, Theraphosidae) for a Theraphosa Monstrous Spider.

Remove the Web and Poison Special rules and add the special rules shown in Table: Specific Monstrous Spider Racial Traits. All spiders can still spin silk (but not necessarily webs). Spiders cannot cast nets if they have this template.

The stats are modified as shown in this table:

This spider may have either +2 Strength, the web ability (with -4 to any DCs and -4 Hp to the webs it builds) or Walk on Water in addition to it's ordinary abilities.

This spider can swim underwater for up to 8 hours at a time, with a +8 racial bonus to any required swim checks. The spider has tremorsense 50ft when within water.

A trap door is a burrow (hole) with a "trap-door" over the top. While within the Trap Door, the Spider gets Tremoursence 60ft. When a creature passes within reach (of the spider inside from the trap door) the spider can make a grapple check against the creature. If it passes, the creature is dragged inside the burrow, and the spider can make a single bite attack (against the target's flat-footed AC). It requires a DC 30 spot check to see the Trap Door (while within 30ft of it). It takes a Spider with this ability D4 hours to make a new Trap Door.

Abrupt exposure to bright light (such as sunlight or a daylight spell) blinds these spiders for 1 round. On subsequent rounds, they are dazzled as long as they remain in the affected area.

This type of web is tubular in shape and leads into a burrow. The spider inside knows the location of anything touching the web as if it has Tremorsense. A spider may attack a creature with a bite attack through the web (no penalty) but it takes a full-round action, and the Spider may only attack once. A purse Web follows all the normal rules for webs. It takes D4 hours to build a purse web of 5 times the spider's leg span in length. It takes a DC 30 spot check to see a purse web while within 30ft. 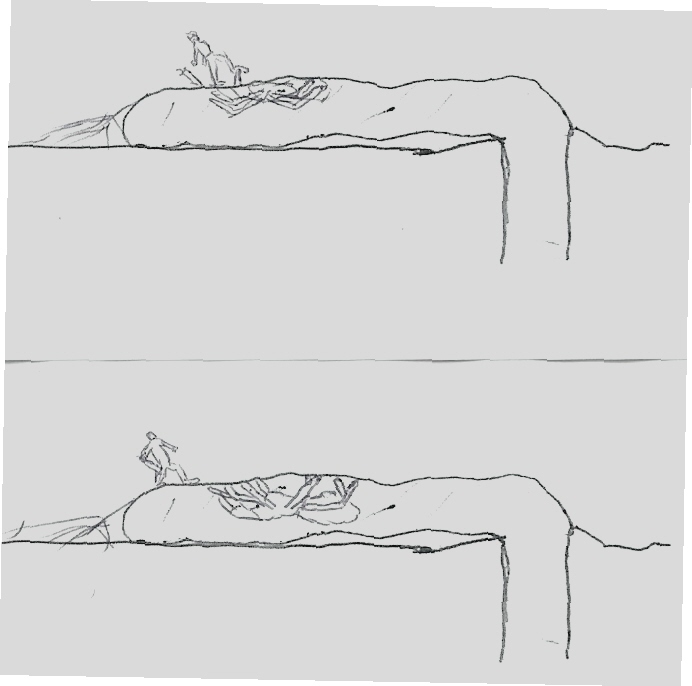 The Spider can throw a web four times per day. This is similar to an attack with a net but has a maximum range of 50 feet, with a range increment of 10 feet, and is effective against targets up to one size category larger than the spider. An entangled creature can escape with a successful Escape Artist check or burst it with a Strength check. Both are standard actions whose DCs are given in the table below. The check DCs are Constitution-based, and the Strength check DC includes a +4 racial bonus. It takes the Spider a full round action to make a web to throw.

This spider has an oily coating on its feet that repels water, allowing it to walk on water as if it was land. It may swim underwater (with a +4 racial bonus to its swim check) for up to 2D12 minutes at a time. It senses any creature within 30ft of the spider as if the spider had tremorsense 50ft (and the creature was in range).

This spider can spit a sticky gum up to 30ft as a free action at will. This is a ranged touch attack with no increment. The target is affected by the web spell (caster: 1st level sorcerer).

The monstrous spider has a poisonous bite. The details vary by the spider’s size, as shown on the table below. The save DCs are Constitution-based. The indicated damage is initial and secondary damage.

The Monstrous Spider has the Poison ability (see above) but the Fortitude save DC is 2 higer than normal and the damage caused by the poison is one die size higher than normal (as if it was attack damage from a creature that had increased by one size).

The spider can spend a full round action to camouflage into the surface it is on. Oxyopidae must be on a green surface to camouflage. The spider can then only be seen from 30ft away by passing a spot check (see Table: Specific Monstrous Spider Racial Traits for DCs).

This type of spider is adept at jumping, far more so than ordinary hunting spiders. If the spider fails a jump check, it does not fall, instead taking a full-round action to climb back up to where it jumped from. This spider has a +30 racial bonus to its jump checks, rather than the +10 granted for being a Hunting Spider. The DC for jumping checks for this spider are halved.

These spiders often wait in their webs or in trees, then lower themselves silently on silk strands and leap onto prey passing beneath. A single strand is strong enough to support the spider and one creature of the same size. An entangled creature can escape with a successful Escape Artist check or burst it with a Strength check. Both are standard actions whose DCs are given in the table below. The check DCs are Constitution-based, and the Strength check DC includes a +4 racial bonus.

These Spiders often create sheets of sticky webbing from 5 to 60 feet square, depending on the size of the spider. They usually position these sheets to snare flying creatures but can also try to trap prey on the ground. Approaching creatures must succeed on a DC 20 Spot check to notice a web; otherwise they stumble into it and become trapped as though by a successful web attack. Attempts to escape or burst the webbing gain a +5 bonus if the trapped creature has something to walk on or grab while pulling free. Each 5-foot section has the hit points given on the table, and sheet webs have hardness 5.

A monstrous spider can move across its own web at its climb speed and can pinpoint the location of any creature touching its web.

This Spider has a very strong web. Both web Escape Artist and Break DCs increase by 2, and the web Hit Points increase by 4.

If this spider charges a foe, it can make a full attack.

All spiders have the following traits: