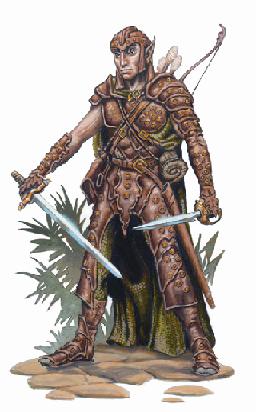 Specialist hunters are similar to rangers in that they can specialize in enemies, but they are far more limited in choice by focusing on only 1 type of enemy.

Specialist Hunters are incredibly effective in dealing with the enemy they specialize against. However, they are only marginally effective against other types of enemies.

Races: Specialist hunters tend to be human because of their adaptability, but it isn't uncommon for other races (particularly ones with a scent ability) to become specialist hunters.

All of the following are class features of the specialist hunter.

Weapon and Armor Proficiency: A specialist hunter is proficient with all simple weapons and martial weapons, and with light armor and medium armor but not with shields.

Chosen Quarry (Ex): At 1st level, a specialist hunter may select a type of creature from among those given on Table: Specialist Hunter Chosen Quarries. The specialist hunter gains a +5 bonus on Bluff, Escape Artist, Hide, Listen, Move Silently, Sense Motive, Spot, and Survival checks when using these skills against creatures of this type. Likewise, he gets a +5 bonus on weapon damage rolls against such creatures. Furthermore, he adds his Intelligence modifier as a bonus on attack rolls against his chosen quarry.

At 5th level and every five levels thereafter (10th, 15th, and 20th level), the bonus against the specialist hunter's chosen quarry increases by 5.

If the specialist hunter selects humanoids or outsiders as a chosen quarry, he must also choose an associated subtype, as indicated on the table.

Track: A specialist hunter gains Track as a bonus feat.

Prescience (Su): A specialist hunter's awareness extends a fraction of a second into the future, allowing him to exploit occasional weaknesses in his enemies. At 2nd level, a specialist hunter adds his Intelligence modifier as an insight bonus on his damage rolls.

Mettle (Ex): A specialist hunter can resist magical attacks and unusual attacks through their rigorous physical training. Beginning at 8th level, by drawing on his experience in combat and physical conditioning, a specialist hunter can weather effects that would hinder or cripple less hardy souls. If he succeeds on a Fortitude or Will save against something that would normally produce a lesser effect on a successful save (such as a spell with a saving throw entry of Will half or Fortitude partial, the effect is negated. A specialist hunter does not gain the benefit of Mettle when he is unconscious or sleeping.

Hide in Plain Sight (Ex): A specialist hunter of 11th level or higher can use the Hide skill even while being observed.

Chosen Quarry (Ex): The epic specialist hunter's bonuses against his chosen quarry increase by +5, every five levels higher than 20th.

Precognition (Su): The epic specialist hunter's bonus to AC and saving throws increases by +1 every four levels higher than 20th.

Deadly Attack (Su): Use the specialist hunter’s class level when determining the DC to resist this attack, as normal.

Quarry Research: Use the specialist hunter’s class level when determining the result of the check, as normal.

Power Resistance (Ex): The epic specialist hunter's power resistance is equal to his class level + 10, as normal (adding his Intelligence modifier against effects created by his chosen quarry).

Quarry Affinity (Su): Use the specialist hunter's class level when determining the save DC for the effects of this ability, as normal.

Religion: Specialist hunters are typically drawn to gods which emphasis hunting if they choose to worship.

Other Classes: Specialist hunters get along well with rangers. Melee fighters appreciate specialist hunters devotion to weapon mastery but chide them for their lack of armor. Wizards, Psions, and Monks admire their discipline, spontaneous spellcasters chide them for it. Sometimes they rub harshly against those obsessed with 'honorable combat' and dissuading the use of stealth.

Advancement: Any combat based prestige class can work with the specialist hunter, although it may be beneficial to multiclass into a caster class to pick up useful utility spells.

Specialist Hunters in the World[edit]

Specialist hunters can be hunters or hired assassins, but they typically do adventuring work. As such, they often form guilds in metropolises to hire themselves out to towns or adventurers who need help with a specific kind of enemy.

Organizations: Specialist hunters do not typically meet unless they create a guild to pool their talents.

NPC Reactions: NPCs have mixed feelings depending on the type of specialist hunter they come off to be. A hunter of animals for sport is admired, but an assassin dare not speak of his profession, and rather plays the part of some other class when introducing themselves.

Characters with ranks in Knowledge (psionics) can research specialist hunters to learn more about them. When a character makes a knowledge check, read or paraphrase the following, including information from lower DCs.

Specialist Hunters in the Game[edit]

A specialist hunter may be hired by towns or adventurers to fight creatures they specialize against. It may be the PCs job to root out and kill a gathering of these creatures. Alternatively they might be assigned to be an assassin of a prominent figure of that creature type, and must escape the attentions of the heavily armed guards afterwards.

Adaptation: The specialist hunter is typically adaptable to any campaign that has a large number of encounters being a specific creature type.