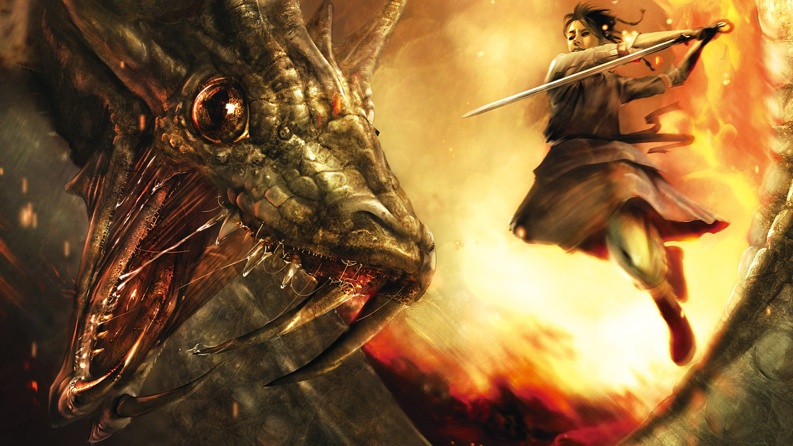 A slayer of dragons prepares to deliver the killing stroke.

Slayers are almost as diverse as characters of other classes. The one thing that unites all slayers is their hatred of a particular (or several) foes. They follow this hatred, allowing it to consume them, destroying those beings that they hate as they walk down the path that consumes them. Eventually, most slayers are slain by the creatures that they swore to destroy.

Special: You must slay a creature that is the favoured enemy selected from your Hate feat.

All the following are class features of the Dragon Slayer:

Favored Enemy (Ex): At 1st level, a Slayer gains a +2 bonus on Bluff, Listen, Sense Motive, Spot, and Survival checks when using these skills against creatures of this type. Likewise, she gets a +2 insight bonus on attack and damage rolls against such creatures.

At 4th, 7th and 10th level, the Slayer bonus against their favored enemy increases by 2.

If the Slayer chooses humanoids or outsiders as a favored enemy, she must also choose an associated subtype, as indicated on the table. If a specific creature falls into more than one category of favored enemy, the Slayer’s bonuses do not stack; she simply uses whichever bonus is higher.

This ability does stack with the Hate feat.

Smite Foe (Su): Once per day, a Slayer may attempt to smite a creature that is one of her favoured enemies with one normal melee attack. She adds 2d6 plus her Charisma bonus (if any) to her attack roll and deals 1 extra point of damage per Slayer level. If the Slayer accidentally smites a creature that is not one of her favoured enemies, the smite has no effect, but the ability is still used up for that day.

At 5th and then again at 9th level, the Slayer may smite a foe one additional time per day, as indicated on Table: The Slayer.

Battle Fury (Ex): When fighting in an encounter against one of his favoured enemies, the Slayer is immune to fear (magical or otherwise). Each ally within 10 feet of her gains a +4 morale bonus on saving throws against fear effects. In addition, she gains a bonus equal to her Charisma bonus (if any) on all saving throws.

Mighty Blow (Su): Whenever a Slayer of 6th level or higher strikes one of the her favoured enemies, the Slayer can attempt to deal extra damage 3 times per day, it does 1d8 per Slayer level plus the slayer's charisma modifier as a free action. She can do this multiple times per round but no more than once per attack. If the Slayer accidentally strikes a creature that is not one of her favoured enemies, the mighty blow is treated like a normal attack, but the ability is still used up for that day.

Legendary Blow: At level 10 the Slayer has become a thing of legend. As such her blows are said to be able to remove the head of an Ancient Wurm with ease. Once a day the Slayer's critical threat Range is (10 - 20 X5). This ability ignores the normal critical threat range for the weapon the Slayer is currently using. Furthermore, this attack deals an additional 1d10 of damage per Slayer level plus the slayer's charisma modifier (if any). If the Slayer accidentally strikes a creature that is not one of her favoured enemies, the legendary blow is treated like a normal attack, but the ability is still used up for that day.