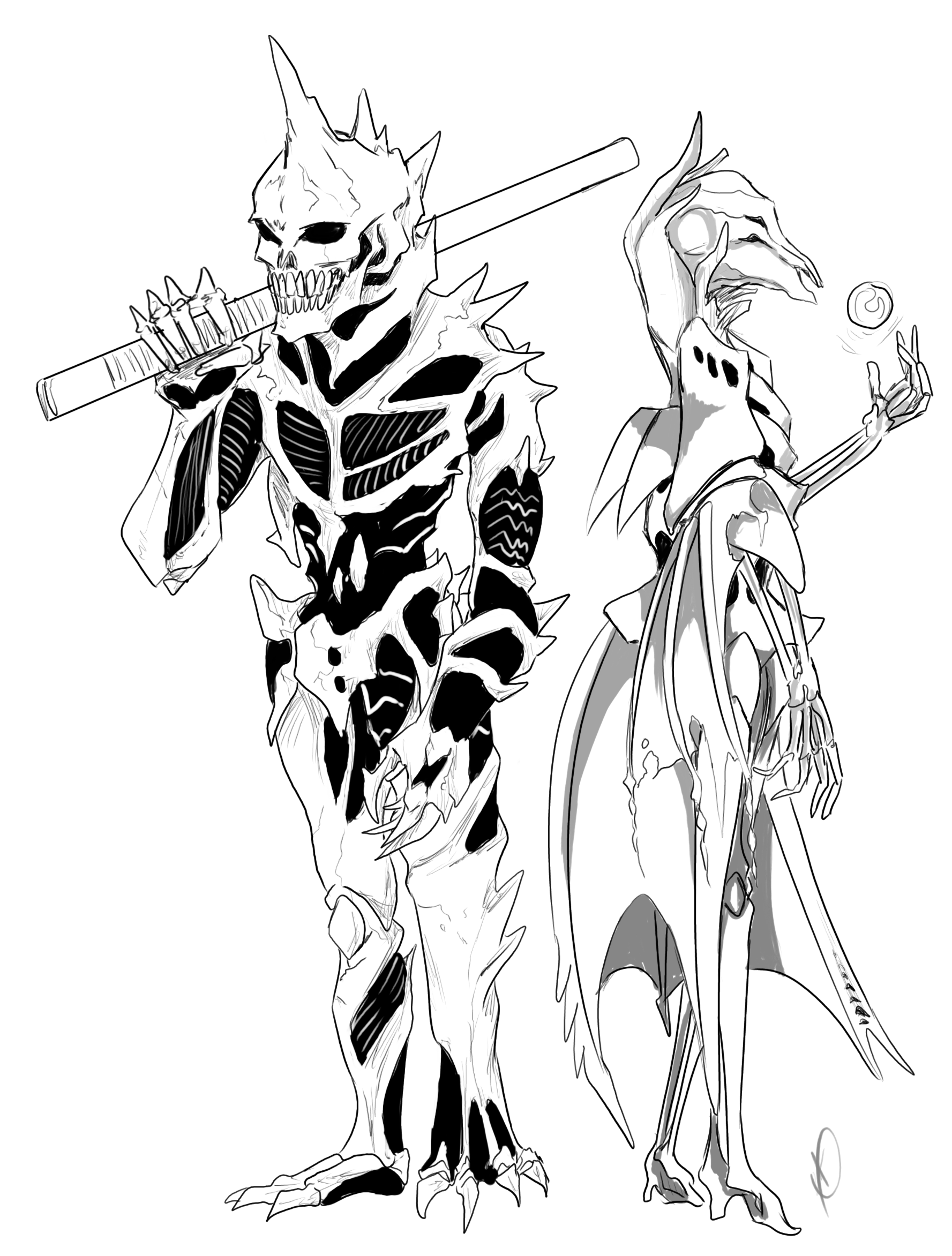 Do not mistaken them for some typical undead skeleton. You will greatly regret it.

The bones that watch over the resting places of others wander without rest of their own. Such is the role of the skeleos, raised from the dead in a haphazard way through strange means. It is said they owe it to a life too well lived. Some essence from the Shadows or the rot of dirt raised them forth to continue without rest. Some say it is the Raven Queen who raised them, as she had observed their lives with interest and wished for it never to end. In that way, they are entertainment for divine eyes. The skeleos do not resemble normal skeletons, having a fleshed out exterior, which is owed to the fact that they are known to mutate over the course of their resurrection. They are thus very different from the typical necromantic fodder skeletons.

Skeleos are best characterized as humanoids that have skeletal motifs ingrained throughout their bodies. However, this is a very loose description. Skeleos stand slightly taller than humans on average. The skeletal remains on their body are hard and boney, but with arrangements very different from that of normal skeletons. These bone protrusions jut out over their black skin, in forms and shapes of all sizes, like spikes, shells, rods, etc. While they are seemingly just undead, there is a dimorphism between male and female skeleos. Male skeleos tend to have more skin exposed and appear to have a more human-like skeleton makeup. Their bodies are often bulky and show muscular outlines. Females, on the other hand, appear more alien and slender, with insectoid parts or appendages. The eyes of a skeleos are often described as blank, either being empty sockets or pale orbs with no distinctions. The formation of the bones on their bodies often resemble clothing or armor, so they usually neglect to wear anything extra.

Skeleos are strange beings, having a sort of mind one might call alien. They are not driven by emotion, often acting in a languid way, or cold to some. This is believed to be attributed to their state of undead self, which leaves them a shell of their former entity. However, this is hard to say, since skeleos are very secretive. They sometimes do remember who they were before death, though not all have this ability. Even those who do recall their past lives regard it with detachment, as if they are wholly something other now, which they sort of are. In general, this is how skeleos act. They see themselves as shells and alien to the world, and so interact with it in a brusque and noncommittal manner. Things like morals and emotion are almost nonexistent with skeleos, who regard much of the happenings in the world from a distance, almost like they are mere observers.

Despite the theories of divine intervention that rose the skeleos from the grave, skeleos are not religious in anyway. They tend to spurn things like faith and belief, or anything which does not happen before their eyes. Therefore, the act of prayer to them is silly or meaningless. Causation for skeleos is also frustrating, and many of them interpret this in wildly different ways. Even in a world where deities may directly affect the flow of time and space, skeleos are indifferent to their influence and usually do not believe divine intervention to be anything more impressive than powerful magic. This can sometimes be problematic, particularly with the skeleos being so provocative with their uncaring attitude. Religious authorities may declare them heretics.

In the world, skeleos are largely once-in-a-lifetime meetings. They are far from many and are solitary wanderers far and wide. Similar to how indifferent they are to the world, they have little interest in each other. For skeleos, they share the mindset not to find out why they are, but just to accept that they exist. So if two skeleos meet, they would react in the same way as if they met someone of any other race. This creates for a difficult way to say they have any ties to each other as a race, much less create a society. They usually wander and live among other societies that are much bigger, like that of elves or humans. However, due to their attitudes and appearance, they are subject to mistreatment. At the same time, skeleos do not really care.

As observers whose times have passed in the limelight, skeleos seek others to amuse and entertain them. They generally do not insinuate themselves into an ongoing event, but they may get involved nonetheless if they are interested. things of interest are what a skeleos will travel far and wide for, seeking amusement and stories to color their afterlife. It is unclear what they do with these stories and the information they collect, as they are not known to have any oral tradition. However, skeleos who are particularly well-traveled become valuable sources of information. Adventuring groups might find a skeleos to join their group, exchanging information for a good journey to tell of.

As a general rule of thumb, skeleos are almost always martial class members. While some develop arcane powers due to the dark energy that rose them from the grave, the nature of the skeleos mindset causes them to spurn divine and primal practices, which are sources of power they do not recognize as unique from that of magic. Psionic powers are largely absent from the mindset of skeleos. Some people say they are too stupid or uninterested to develop the powers to wield psi. In general, skeleos view most powers as just magic or martial, leaving little differentiation.

Fighter: Skeleos are commonly fighters, as it is a concrete form of power and strength that they appreciate in the world as a standard. While they are highly defensive, however, skeleos are not super keen on protecting allies as fighters. What they like is simply that they themselves are tanks. If they find something that interests them, then they will use their defenses to the best of their ability to aid the story along.

Warlord: Far from inspiring, skeleos are more of the frightening leader type. Having collected a wealth of stories and experience, skeleos offer valuable tactics and service to allies. However, unlike a typical leader who inspires by charismatic encouragement, skeleos scare people into moving half the time.

Sorcerer: For the few skeleos who truly draw on their shadowy origin, they are capable of harnessing their origin power to become a sorcerer. Skeleos who are sorcerers are always originals, never elementalists, and draw their power from the cosmic magic source. This is because their entwinement with death and the cycles of life are believed to be a cosmic force.

Voci is a skeleos sorcerer wandering the east of the continent in search of a famed tomb she believes to be housing a relic of great interest. As the tomb's location is embedded within dangerous territory, she seeks the aid of some adventurers to help her cull the monsters what impede her way. In exchange, she promises them the aid of her magic until her goal is achieved.

Srathlax is a skeleos fighter that used to be a hermit out in the harsh desert. Having encountered a traveling group of adventurers, he was spurred by their tales to travel the world. In joining them, he offers his services to see their journey through to its conclusion, an affair of interest he has not had in over several decades now.

Thaedo is a newly risen skeleos warlord who longs for a thrill so much that he yearned to die. Upon awakening in his new state, Thaedo sought interest in battle, and thus entered a series of gladiatorial battles. Recognizing his prowess, some guilds offered him a job as a trainer. Hearing stories from greenhorns, Thaedo was not content to remain rooted and so decided he would go off on an adventure with a group he solicited in search of greater battles that would be in legends forever.

When creating a skeleos adventurer, here are a few points to consider.

A good story is worth dying again for. Having already died, death is a bit of a bland issue for skeleos. They do not worry about death as much as mortal creatures might, and often do not think much on it other than something that just happens. This, coupled with their want for entertaining experiences, can sometimes lead them to adventure recklessly.

What matters is what is observed. First-hand experiences are better than secondhand, for skeleos. While they may engage intellectual material voraciously, they ultimately wander because they want to experience stories for themselves. As such, they may often be unsatisfied with alternatives.

The cause is either magic or material. When confronted with something like divine miracles, skeleos are highly critical of such thought on deific causation. For them, the two main sources of cause in the world are either through mundane or magical means, both of which are caused by the ones living in the world at the moment, rather than extraplanar forces or higher powers. This can sometimes lead to skeleos being stubborn in the face of actual divine intervention, which makes them look a bit silly.