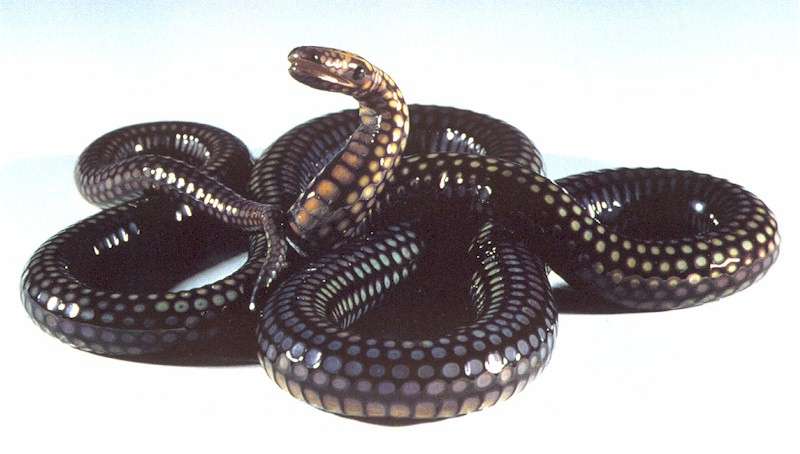 The holy symbol of Shalrikk

Shalrikk is the creator of lizardfolk and yuan-ti on Aegir. He is a member of the Pact of Ruin. Shalrikk was originally drawn to the world's deep and wild jungles, and the beasts with their secret violent hearts. He willed the lizardfolk and yuan-ti into being, and sought to awaken the beasts that had been calmed by the fey, creating what are now known as "dire" animals.

Shalrikk is usually depicted as a yuan-ti anathema, body made of snakes and a single large cobra for a head.

Shalrikk is a god of violence, and specifically ritual violence. He commands his followers to take great joy in the violence they deal; to revel in it and see violence as a form of prayer. The more suffering his followers inflict, the better.

The followers of Shalrikk are primarily lizardfolk and yuan-ti, though evil warriors or assassins might devote themselves to the god of violence as well.

The ziggurats where yuan-ti anathemas are held serve as the holiest temples to Shalrikk. Here, ritual sacrifices are performed each day, the victims dropped to the prisons within the ziggurats to feed the anathemas.

The clergy of Shalrikk are primarily yuan-ti, with some lizardfolk mixed in (particularly in smaller villages). The clergy participates in ritual scarring and maiming of their bodies, performing violence against their own flesh in devotion to their god.

Religious ceremonies almost always involve a ritual sacrifice, whether it be animal or, preferably, humanoid. Sibilant chanting, prayer, and self-mutilation are also part of Sharlikk's ceremonies.