An undead amalgamation of a humanoid upper body and the lower body of a serpent, sepulchrals are a fearsome race, even among the undead. They typically serve their lich masters or may act on their own accord when left to their own devices. 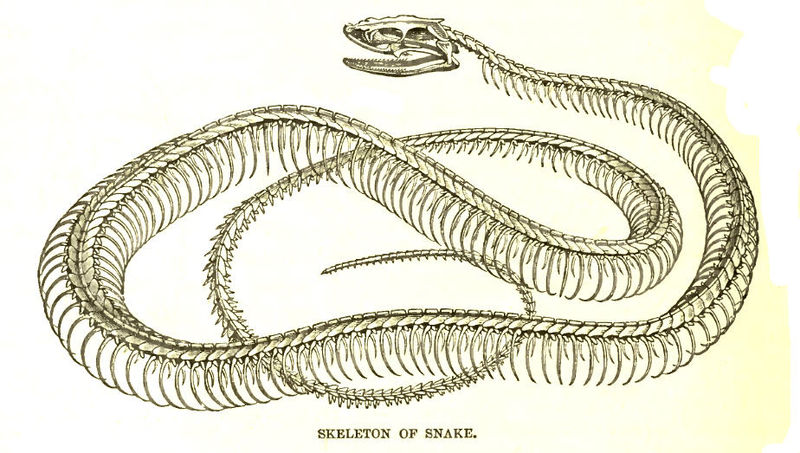 The skeleton of a snake, which shares a similar lower body with the sepulchrals.

Sepulchrals are undead, skeletal constructs of a body with the upper half of a humanoid and the lower half of a serpent. The skull is that of a snake. Their bodies generally show clear signs of decay due to their considerable aging and typical dwelling in harsh environments. The arms of a sepulchral are constructed of cartilage rather than bone. Thus, their arms will eventually decay before the rest of their body, leaving them as skeletal serpents without arms. Their eyes are green lights within the sockets and are said to be able to render ones equipment useless with a glance, leaving them wide open to attack.

Sepulchrals are daunting, animated constructs created by the Tomb Kings of old. These kings were believed to be a small circle of powerful necromancers who were undead themselves. Supposedly, the head king was a lich, even. The sepulchrals served mainly as guards for the mausoleums which housed the resting places of those waiting to be reanimated into undead. They thus got their name from these sepulchers they were in charge of. As the Tomb Kings' servile creations, they almost without exception originated from one of many tomb cities where they were are risen from the dead. They served under their undead masters through many eras of war, to see the rise and fall of numerous kingdoms. However, over time, many gained autonomy and began to make lives for themselves as adventurers. Many others, now abandoned by their masters to the sands of time, lie patiently in wait deep within the earth, beneath desert sands or in great underground dungeons.

Those who do surface to the world above typically do so on their own will and of their own accord. As such, the sepulchrals outside a tomb setting are generally characterized as lone wolves, though some do warm up to those who display will and power bearing resemblance to their long lost masters of the undead. They often traverse the land in search of such individuals who they might follow. Sepulchrals who remain within their designated sepulchers are like permanent guards on duty. They do not particularly interact with one another save to communicate statuses and trespassers. They are formidable fighters known for vicious ambushes, capable of springing forth from the ground and felling hapless prey before they even have a chance to realize they're under attack.

Sepulchrals are bestowed their names from their Tomb King creators. However, a sepulchral may forsake their given name in favor of one of their own choosing, or perhaps forget their original name with the passing of eras.

Skeletal beings that are half humanoid and reptilian
Ability Score Increase. Your Dexterity or Constitution score increases by 2 and your Wisdom score increases by 1.
Age. Many sepulchrals have existed for untold amounts of time, lost and forgotten in the deepest caverns of the earth. However, after about 20 years with exposure to the outside world, their cartilage rots away and leaves them as armless, bony serpents.
Alignment. Sepulchrals tend to lean toward chaotic alignments and are normally either neutral or evil.
Size. Sepulchrals stand between 6 and 7 feet tall on average, though when accommodating for their lower body which they slither upon, their actual body length is typically 11 to 13 feet. Generally weighing in around 150 pounds, your size is Medium.
Speed. Your base walking speed is 30 feet.
Darkvision. You can see in dim light within 60 feet of you as if it were bright light, and in darkness as if it were dim light. You can't discern color in darkness, only shades of gray.
Undead. As sepulchrals are unnatural constructs of the undead forged by the Tomb Kings, they bear a supernatural resilience. Your creature type is undead and you do not need to breathe, eat or drink, or sleep. If you choose to consume food, it falls straight through the gap in your mandible. You are immune to poison damage, diseases, as well as being poisoned.
Desert Ambusher. Your slithering makes it easy for you to move without detection over sands like a sidewinder, allowing you to sneak up on enemies easily to ambush them. You have advantage in Dexterity (Stealth) checks in desert environments.
Gaze To Dust. The effectiveness of sepulchrals came from not only their ambush potential but also from their disarming gaze, which can reduce defenses. As an action, target a creature you can see within 60 feet of you and make a ranged spell attack roll against their armor's base Armor Class. On a hit, your gaze momentarily speeds up the decay of their armor. Until the end of your next turn, their Armor Class cannot benefit from any bonuses their armor gives. Creatures with natural armor are immune to this effect.
Languages. You are able to speak, read, and write Common as well as one other language of your choice.