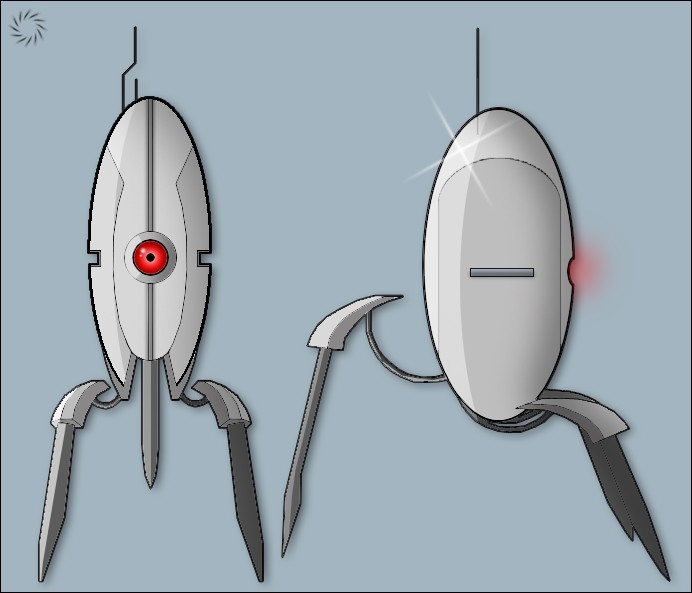 As you round the corner a ruby red light suddenly locks onto your position, with the soft click of metal in the distance. Down the hall is a vaguely egg shaped construct on a tripod of thin legs, and a friendly childish voice cheerfully exclaims "There you are."... Then the magic missiles start coming...

Mass produced to serve as cheap but effective guards, these unassuming golems dutifully stand still, looking for signs of danger with a disturbing cheerfulness. They may not be able to move and are easily defeated by a strong gust of wind, but head on they are a deadly accurate opponent.

A sentry golem has a simple mind and purpose. It is placed by its owner at key points in a dungeon, always with a ready action to fire at whatever it is told to attack (often, everything but the owner). When it spots them it opens its sides, releasing a barrage of force bolts until the target is dead, or vanishes. While they are smart enough to speak, they are easily tricked and their inability to move means a clever combatant can walk right by them without even disturbing them.

You can pick them up and they'll panic until set down, but they will not fire, so they cannot be used as mobile turrets. Motion throws off their targeting systems. If they are knocked over and later re-activated they are smart enough to tell the owner a vague description of who assaulted them in the last encounter. An unwise thief who knocked one over without destroying the golem may have eyewitness evidence against him. They are also very talkative in battle and rather friendly while attacking. However, they don't have much to say and are little more than talking, friendly attack dogs.

When it spots a potential target it begins to fire a swarm of force bolts in machine gun fashion from the turrets hidden in its sides. It effectively employs a Magic Missile spell as a 5th level caster. It can fire three bolts of force for 1d4+1 force damage each. It employs this ability at will. It can only shoot at things within a 150 ft cone in front of it (the range of Magic Missile, and in this case it's effective range of visibility), so sneaking around it will prevent it from firing.

Unlike the actual Magic Missile spell, Flurry of Shots bypasses immunity from the Shield spell, but not from other spells such as Globes of Invulnerability.

A sentry golem is immune to any spell or spell-like ability that allows spell resistance. In addition, certain spells and effects function differently against the creature, as noted below.

The golem gets no saving throw against any of these effects.

If knocked over the sentry golem will fire rapidly and yell out in alarm as loud as the alarm spell. This will go on for 1 round, before it shuts down. It can be re-activated by placing it back on it's feet and touching a small rune on the back.

A sentry golem's body must be hammered out of specially treated steel and woods weighing at least 50 lbs, and rare oils and powders costing 500gp. Creating the body requires a Craft (Metalworking) or a Craft (Armorsmithing) DC 15.

You can add additional HD for 1000gp and 80xp per HD. At 7 HD, the Sentry golem fires 4 missiles and the CL of the missiles becomes 7th. At 9th it fires 5 missiles at CL 9th.