This page details the Tome Samurai, as modified to fit the Tirr setting. You may be looking for the Samurai found in the Complete Warrior, or the original Frank and K creation, Tome Samurai. 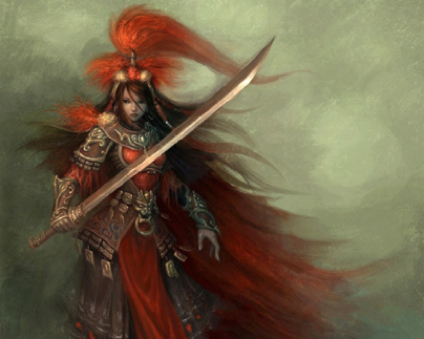 The war torn countrysides of many a land are held together with tremendous amounts of dedicated work by masters of weaponry and honor. These martial specialists represent the structure of society by their very existence, and beat the living crap out of any who would dare to stand against it.

At least, that's the idea. In truth, there are those who take upon the mantle of the Samurai only to betray its ideals. Those who trample the fabric of the social network they are supposedly sworn to protect.

With your peculiar set of abilities, you are the anti-tank gun. With your Kiai! ability, you are practically guaranteed to win personal combat—as long as you have uses of it left. As you gain Samurai levels, you gain more abilities which negate defenses, allowing you to, for example, demolish the formerly-invulnerable Wall of Force and escape the mighty Force-cage. Your ability to commune with the dead gives you something to do when you're trying to find out where to go next. Your armor and HP are relatively fragile, making you something of a glass cannon—nonetheless, you will be able to reave your way through crowds of opponents, and no matter what your opponent is, you will eventually be able to hurt it.

Alignment: The Samurai can be of any alignment. All of them must maintain the veneer of honor and civility, though there is no reason that they have to actually be Lawful.

Races: The Samurai is primarily found in societies where the law of the land is held in primacy over other things. So while a Samurai himself does not have to be Lawful, Lawful races bear the vast majority of Samurai.

All of the following are class features of the Samurai.

Bushido: Samurai are required to perform certain tasks and achieve certain results before they can be considered such; The requirements of being a Samurai and the burden they must carry are detailed in Bushido, the Way of the Warrior, which every Samurai adheres to. All of the following are aspects of Bushido:

Pledge of Loyalty: Samurai pledge their loyalty to a Lord, a figure of temporal power and head of a noble family or clan. To retain this Lord, they must follow this Lord's orders and uphold any Code of Conduct the Lord obeys. As long as a Samurai does these two things, he cannot be forced to act against his Lord or Lord's family by mind-affecting effects. Samurai can also pledge towards an ideal, such as righteousness or lawfulness. This, however, forces the Samurai to abide by the very ideal of these virtues or evils, effectively becoming this alignment, and requires that his ancestors would normally allow this.

Ancestral Weaponry: Every culture with a Samurai tradition has a signature weapon that Samurai from that culture use. Whether it is the Spiked Chain of the Hobgoblin Khanate of Underdark or the Katana of the Human Empire of the Ashen Coast, the weapon serves as a symbol of the office and prowess of the Samurai. A samurai can only have one weapon designated as his Ancestral Weapon at a time, and this weapon must be a masterwork weapon exalted by the Samurai's warrior culture. He must perform a 24 hour ritual to call his ancestral spirits into the weapon and designate it as his Ancestral Weapon. This ritual costs 100 gp in incense and offerings, and once performed grants the following abilities:

If a Samurai's ancestral weapon is broken, he suffers similar penalties as if he had lost a familiar: The Samurai must attempt a DC 15 Will saving throw. Failure means he loses 200 experience points per Samurai level; success reduces the loss to one-half that amount. However, a Samurai’s experience point total can never go below 0 as the result of a weapon's destruction. The Samurai cannot replace his Ancestral Weapon until either one year and one day have passed, or the Samurai has been forgiven by his ancestor spirits, through mediation or through atonement.

Code of Honor: A Samurai, just like a Knight or Paladin, is bound to a specific set of rules and conduct. The following is specific and key things that are necessary of Samurai, as dictated by Bushido:

In duels of this nature, A samurai can elect to be merciful, or attack only for non-lethal damage with the backside of his blade. The latter gains him −2 to hit, but these are acceptable if the Samurai does not wish to kill his opponent.

A Samurai's lord or lord's family can pardon the failure, if they are able and wish to, either immediately or at a later point in time.

A Samurai who does not follow these tenets of Bushido is no longer able to call himself a Samurai, and instead, becomes a 'Ronin'. A Ronin can no longer progress in the Samurai class until he is able to return to the path of Bushido; For a Samurai who has his Ancestral Weapon broken, this can last as long as a year and one day, as detailed above. To a Samurai who has rebelled against his lord or code, this is until he is granted atonement.

Ancestral Alignment: A Samurai may be of any alignment, but his ancestor's must have defined, general alignment as well. The Samurai gains power from the support of his ancestors, as he calls them into the ancestral weapon. If the ancestors disapprove of the actions the Samurai commits, they may end up abandoning him. To determine this, any questionable action forces the Samurai to roll a d%, and determine the result based on it's severity:

If a Samurai ever performs an act that would go against his ancestors and their approval, the ancestor spirits in his designated weapon will abandon him. The weapon loses all abilities that it gains as a Ancestral weapon, and has a 20% chance of breaking, outright. The Samurai will no longer be able to call an ancestral weapon unless he can reconcile with his ancestors, or atones. This penalty can also be incurred through failure to uphold Bushido, but only if the ancestor spirits believe this is dire enough to warrant abandonment, and above roll takes place.

Horde-Breaker: A Samurai gains Horde-Breaker as a bonus feat at 2nd level. If the Samurai already has this feat, he may take a different feat from the Fighter Bonus Feat list that he meets the pre-requisites for.

Kiai! (Ex): At 2nd level, a Samurai may convert a successful strike with his Ancestral Weapon into a confirmed critical hit. He may use this ability a number of times per day equal to his half his Samurai level + 2. This ability is a free action that is declared after the strike is rolled and confirmed as a hit, but before damage is rolled. This ability cannot be used on Attacks of Opportunity.

Blindfighting: A Samurai gains Blind-Fight as a bonus feat at 6th level. If the Samurai already has this feat, he may take a different feat from the Fighter Bonus Feat list that he meets the pre-requisites for.

Terrible Blows (Su): At 6th level, a Samurai's Ancestral Weapon bypasses Damage Reduction up to 10 as if it were a magical weapon, and ignores Hardness up to half the Samurai's Class level.

Parry Magic (Su): At 8th level, a Samurai may use his Ancestral Weapon to parry magic targeted at him. When the Samurai is targeted by a spell or supernatural ability, he may take an SRD:Attack of Opportunity against the targeted effect. In pursuing this, the caster rolls a spellcraft check, and adds the spells level to the number; If the Samurai can make an attack roll of equal or greater than the resulting number, the spell is parried.

Quick Draw: A Samurai gains Quick Draw as a bonus feat at 8th level. If the Samurai already has this feat, he may take a different feat from the Fighter Bonus Feat list that he meets the pre-requisites for.

Blade of Devastation (Su): At 10th level, the Samurai may attack enemies within his reach through objects and walls, his Ancestral Weapon automatically destroying any unattended object or wall in the way with a Hardness less than 10. As a result, enemies do not gain cover bonuses against an attacking Samurai under these circumstances. This effect can also pierce force effects.

As a full round action, he can also destroy unattended objects of any Hardness with a successful Ancestral weapon attack, or dispel up to a 10' by 10' section of a [force] effect.

Cut Magic (Su): At 12th level, a Samurai may attack ongoing spell effects by attacking the square they are in for Area of Effect effects or the object or person for targeted effects (which does damage as normal to the object or person). This attack is handled like the Samurai's Parry Magic ability, but it only dispels a 10' by 10' section of an Area of Effect spell or spell-like ability.

Deny Caster Defenses (Ex): At 132th level, a Samurai attacking with his Ancestral Weapon ignores any AC bonuses on his targets that come from spells or spell-like abilities.

Final Cut (Ex): At 14th level, a Samurai's Ancestral Weapon gains the Vorpal special quality, even if it is not a slashing weapon.

Reflect Magic (Su): At 16th level, a spell effect that would be dispelled by a successful use of the Samurai's Parry Magic ability can instead be reflected back on the caster, as per a spell turning effect.

Blade of Souls: At 16th level, any enemy killed by a Samurai's Ancestral Weapon has his soul sucked into it, and this enemy cannot be raised, resurrected, or otherwise returned to life until the Ancestral Blade is broken. Each time the Ancestral Weapon takes a soul, the Samurai gains a single bonus use of his Kiai! ability that must be used before the next sunrise.

Deny Armor (Su): At 18th level, a Samurai attacking with his Ancestral Weapon ignores any AC bonuses on his targets that come from armor or natural armor.

Scrolls of Wisdom: At 20th level, the Samurai has reached the pinnacle of his art, and he may compose a treatise of his collected wisdom. If he spends one month composing this treatise, he may distribute it and spread his wisdom. Anyone who reads this treatise gains a +2 competence bonus to attack characters with Samurai levels, but a -8 penalty to attack the writer of the treatise.

In addition, a Samurai who writes his treatise no longer takes ability penalties for aging as long as one copy of the treatise exists.