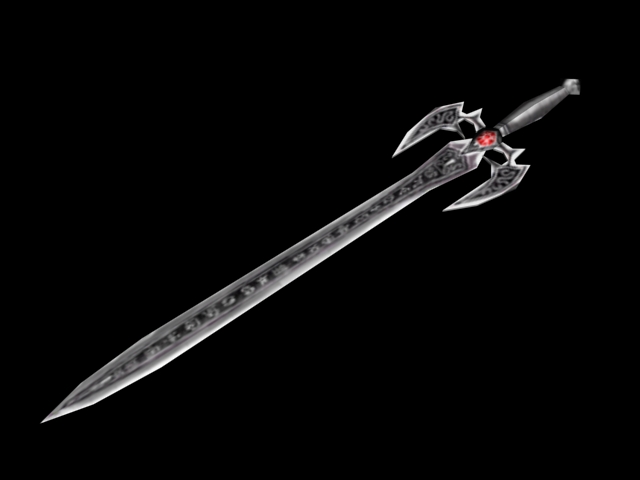 The Runic Blade glows when active.

This bastard sword +1 has a dark gray blade with silvery sharpened edged. Along the center is a groove marked with various black magical runes which glow blood red when actively holding a spell or discharging a current spell. It is prized by eldritch knights and other gishes who can make best use of it. In fact, in the hands of an arcane spellcaster, it is treated as a martial weapon instead of exotic. Those who would normally employ one often take the time to become proficient in such weapons and gain a high enough attack bonus to use them effectively.

A spellcaster may imbue the blade with an arcane touch or ranged touch spell and attack as part of a standard action. This does not permit a full attack, but can be done as part of a charge. As usual for casting a spell he must make a concentration check to avoid the attack of opportunity. When it strikes the blade deals its damage and the touch or ranged touch spell goes off, striking the opponent as normal. If the spell has an area effect, it only affects the target struck. If the attack misses the normal AC, but strikes the touch AC the spell goes off but the sword deals no damage. If the sword misses entirely, the spell does not go off and is not lost, unless you have fumbled on a natural 1, in which case the spell accidentally discharges harmlessly.

The creation of the blade synergies with certain enhancements. If the sword is given the spell-storing enhancement the cost of gold and XP is 10% less.