"I once had a bad accident where my arm got broken when I was nearby a ratitaur village. When the guards saw me stumble by, they litterally rushed at me, carried me to the inn and tended to my arm, all the while grumbling about me getting wounded. This is when I understood what people mean when they say that ratitaurs are kind but not nice."

Ratitaurs have the upper half of a human and the lower half of a flightless bird, with the human upper part stemming from where the bird lower part's neck would be. This makes them tall enough to tower above most other humanoid races. Their human half can be as varied as any human, while the bird half tends to vary with the size of the individual. As so, smaller ratitaurs will typically have jet black feathers whereas bigger ones will have brown, grey, or white feathers. Their legs are either black or a grayish pink. Occasionally, a ratitaur will have traits such as blue patches of skin, or talons instead of nails. They favor clothing which matches their feathers in color, and use resilient fabrics and leather. 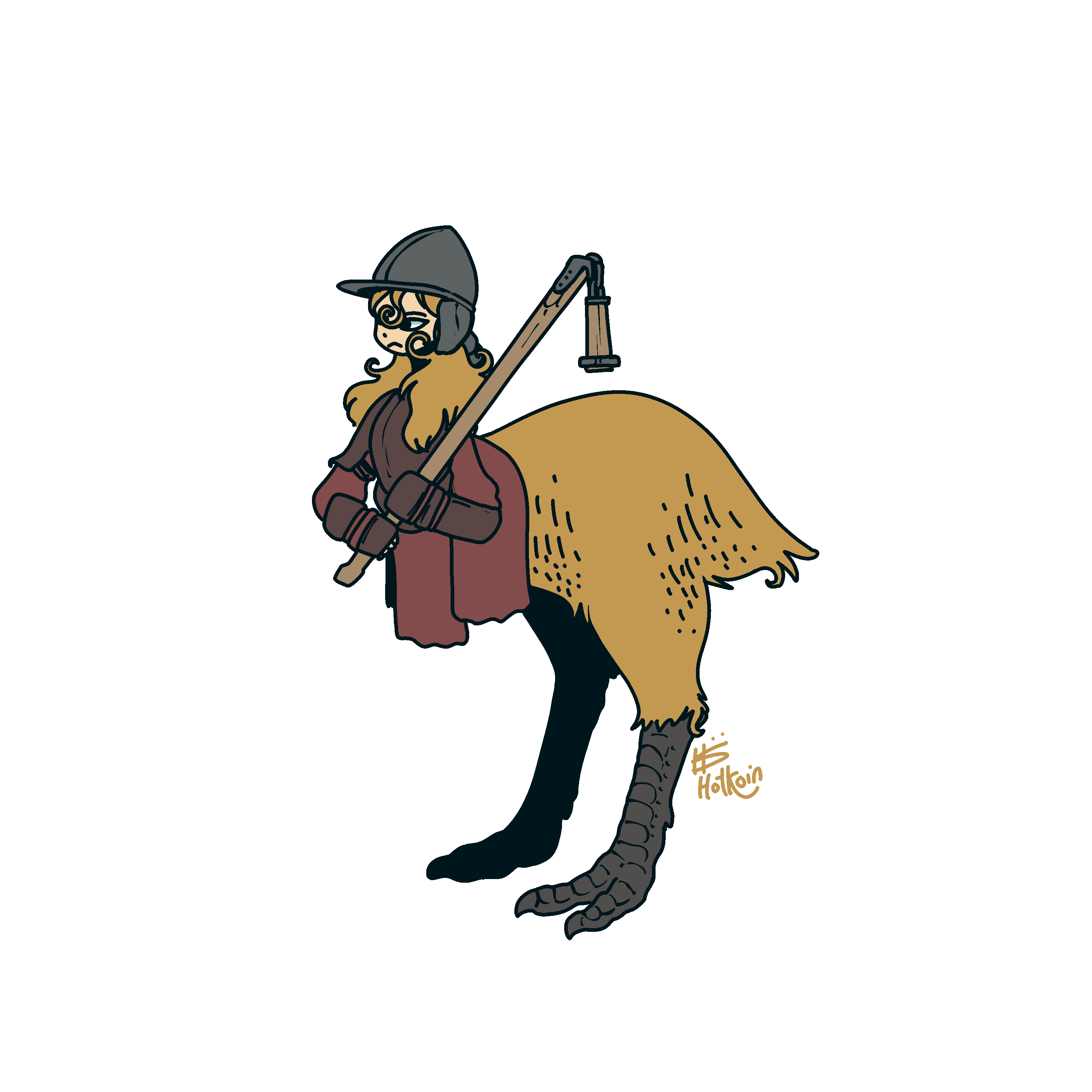 The very existence of the ratitaurs takes its roots in a 500 years old experiment. A powerful wizard was fascinated by aarakocras, and wanted to blend humans and birds into one single race to match them. This did not work as planned, for he ended up creating beings with the upper half of a human and the lower half of a flightless bird: the first ratitaurs. Enraged by his failure, the wizard made them into his pawns, experimenting on them and torturing them on a whim. However, this did not last, for one fateful day the wizard had to face the revolt of all of his so-called slaves, who mercilessly shredded him apart. The ratitaurs then went on their way, bearing many a scar that would not properly heal before long.

The ratitaur society has been shapen by the many hardships they went through. As such, they most often choose to settle in forests, where they can be self sufficient. They then either build small towns and hamlets or go on and build a house to live in on their own. Ratitaurs like to keep to themselves, which has led some of their towns to be downright isolationist at times. However, they will strive to help anyone in need that they come across. This has given them the reputation of being altruistic recluses. Their education is centered around being able to get by as soon as possible. That being said, they treat each member of their community as family no matter what happens. This means that in most towns where you can find ratitaurs, they'll be very much clan-like in behavior. Due to their upbringing, ratitaurs tend to be mistrustful towards magic, especially the arcanic kind. This means that ratitaur spellcasters are rare, and most of those are clerics, paladins or druids.

Ratitaurs tend to adopt names common within the communities that they coexist with. When on their own, they will often use names that were used in the cultures their ancestors originated from before getting experimented on. They tend to only use a given name and no family name or such.

Half human half flightless bird hybrids scarred by their past and highly defiant towards arcana.
Ability Score Increase. Your Strength score increases by 2 and your Wisdom score increases by 1.
Age. Ratitaurs commonly live up to 110 years, though unlike humans they stay vigorous all the way through. They reach adulthood at 20.
Alignment. Due to their past, ratitaurs tend to be reclusive, yet altruistic. They lean most towards Lawful Good. Ratitaurs that live within other communities lean towards Neutral Good.
Size. Ratitaurs tend to be between 5'7" and 8 feet tall. Your size class is Medium.
Speed. Your base walking speed is 40 feet, and your base swimming speed is 20 feet.
Limited Dark Vision. You can see in dim light within 30 feet of you as if it were bright light, and in darkness as if it were dim light. You can't discern color in darkness, only shades of gray.
Powerful Legs. You have powerful bird legs. You are proficient in the Athletics skill.
Deadly Talons. Your legs are natural weapons that you can use to make unarmed strikes. If you hit with them, they deal slashing damage equal to 1d6 + your Strength modifier.
Arcanic Resistance. Due to your race's past, you have advantage on saving throws against any magical effect that alters your mind or stuns you, and magic cannot put you to sleep.
Languages. You can speak, read, and write Common and one other language amongst the following: Giant, Halfling, or Gnome.
Subrace. Due to their arcanic roots, ratitaurs do not have much variations in terms of body types, but some have a heavier build and are more enduring than the average ratitaur, belonging to a variant called aepyornid.

The aepyornid ratitaurs are heavily set, and while they do not have legs as deft as other ratitaurs, they have much higher stamina. While aepyornids are not as common as regular ratitaurs, they are much better known by the other races, as a lot of them are traveling merchants, not caring much about their people's reclusive tendencies. Their travels having widened their perspectives means that most arcanic spellcasters amongst ratitaurs are aepyornids, which makes some fear that this may have dulled their vigilance towards the dangers of arcana that ratitaurs know all too well.

Ability Score Increase. Your Constitution score increases by 2 and your Charisma score increases by 1.
High Stamina. You take no movement penalties from armor. You also count as one size larger when determining your carrying capacity and the weight you can push, drag, or lift.
Merchant's Insight. You have an acute understanding of social interactions. You are proficient in the Persuasion and Insight skills.
Blunt Talons. Your talons are more fit for long travels than for shredding things apart. As so, they deal bludgeoning damage instead of slashing.

When creating a ratitaur character, you can use the following table of traits, ideals, bonds and flaws to help flesh out your character. Use these tables in addition to or in place of your background's characteristics.