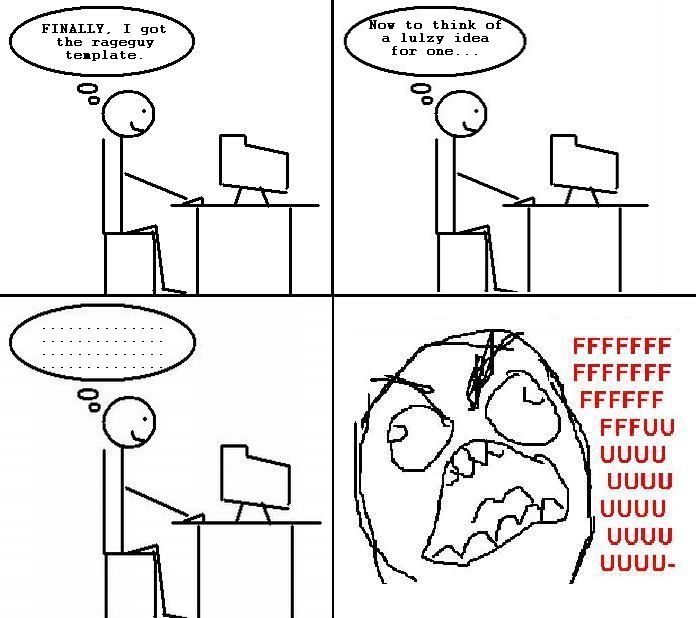 The raging crasher cannot be stopped! He is mad, really mad! It is the unstoppable force to the immovable object, and when his anger boils he cannot be held down. It's like that one time they told you you were behaving badly and should stop, and it made you so mad you KILLED THEM, and then ran off to be mad elsewhere! That's just how man you are! And as a raging crasher you gain power from your inner fury to defy the hardest of things and collide with the source of his anger in a cataclysmic disaster! WAAAIGH!

The fury of the barbarian is an exciting, feral time for a barbarian. Those who succumb to the joy of rage cannot have that joy stopped by mere bonds. You use your rage to break that which holds you and crash into your enemy with all your love of adrenaline.

Barbarian Abilities: A raging crasher is, at its core, a barbarian who cannot be stopped in rage. As such, a raging barbarian continues to gain rage, and its benefits, as if they were leveling in barbarian, including the improvements to the bonuses of rage and the number of rages per day. They may also add their raging crasher levels to their barbarian levels to determine the effectiveness of their Improved Uncanny Dodge if they possess it (it does not however grant it to a creature who lacks Improved Uncanny Dodge). A raging crasher does not gain the benefits of trap sense, a barbarian's damage reduction progression, indomitable will, or tireless rage,

Unreasonable (Ex):: A raging crasher cannot be reasoned with, for he knows he can do no wrong and has no need for apologies or manners, to the point of making your average orc look like a gentleman. Whenever a raging crasher is subject to an enchantment effect they gain a +1 bonus to their save. These bonuses increase to +2 at 4th level, +3 at 7th level, and +4 at 10th level.

Wall Crasher (Ex):: You are a deadly train of destruction and your body becomes a weapon. At 3rd level, whenever you successfully bull rush someone into a wall or other solid object, they stop as normal and you crush them with such an impact you deal 4d6 + Str in damage.

Great Cleave: A raging crasher gains Great Cleave as a bonus feat at 5th level. Their motion of their attacks carry on ignoring all solid mass in their way.

Bullheaded (Ex):: A raging crasher truly is bullheaded, but at 6th level it becomes literal. They gain a gore attack which deals 1d8 + 1 1/2 strength damage (for medium creatures).

Improved Wall Crasher (Ex):: You smash everything you crash. At 8th level, whenever you successfully bull rush someone into a wall or other solid object, they stop as normal and you crush them with such impact you deal 8d6 + twice your Str in damage.

Unstoppable Force (Ex): At 9th level a raging crasher may bull rush an opponent of any size. He is no longer restricted to running into beings one size larger or smaller. He must still overcome the size penalties associated, but a sufficiently strong raging crasher can knock even a dragon off a cliff.

Titanic Ego (Ex): At 10th level a raging crasher is so full of himself and so certain that reality bends to accommodate, and he is treated one size larger than he actually is for the purpose of size modifiers and weapon size. Effectively the raging crasher obtains the Powerful Build racial ability found in Goliaths. If you already have Powerful Build, you are counted two sizes larger instead for everything except for weapon size, where you remain one size larger.

In addition, the lunatic strength and spiritual weight of a 10th level raging crasher is apparent in their rage filled madness. When they rage, they may make an intimidate attempt as a free action against one target with their Crashing Rage bonus as a bonus to their Intimidate check.

All of the following are class features of the Raging Crasher.

Unreasonable (Ex): The epic raging charger continues to get bonuses to resist enchantment effects. At level 11 and every 3 levels beyond, the value of the raging charger's Unreasonablity increases by 1.

Combat: The raging crasher, like any good full BAB class, is a front line fighter. In particular he is the one leading the charges, and manages some manner of battlefield control by moving the opponent where they need to be with his bull rushes. Good tactics, by cunning instinct or a good tactically minded ally, are quite possible taking battlefield control out of the hands of solely the caster.

Advancement: Barbarians are heart, more levels in the barbarian class and other classes which promote their rage are in order. Indeed raging crashes benefit greatly from more rages per day, giving more uses for their elementally charged smite-like attacks.

Resources: Raging charges are not usually within any organizations, being compose of people who have given into their instincts and adrenaline, to the point where it manifests as a hostile elemental presence.

Raging Crashers in the World

The raging crasher are made in the same place as the barbarian, but they have found the most excitement comes when you're staring your enemy in the eye, watching their shock and fear as you carry them away effortlessly. In places such as canyons and in enclosed spaces like dungeons, the raging crasher excels, so more often than not raging crashers are found in adventuring parties, using the closed terrains adventurers encounter as their playgrounds.

NPC Reactions: On the outside, there is no difference between a raging crasher and a barbarian to a commoner. Only when the meteoric barbarian powers start surging do they realize how terrifying and egotistical they really are. Afterwards they may think the barbarian to have some unknown arcane power, or inherent elemental property, very strange, and possibly intimidating as they realize there is nothing they could hide behind that could protect them.

Characters with ranks in Knowledge Local can research Raging Crashers to learn more about them. When a character makes a skill check, read or paraphrase the following, including information from lower DCs.

Raging Crashers in the Game

Raging Crashers are the front line battlefield control, protecting casters by pushing the enemy away from them, and moving enemies into environmental hazards.

Adaptation: The Wall Crasher damage can also be calculated as a variable amount. Instead of using the posted valued, the crash damage is your weapon damage x2 and x3 respectfully. It is similar to the lance damage of a charging mounted unit in such a case, and may result in more or less damage than the normal amount.

Sample Encounter: A cruel minotaur is blocking a trade path, holding it random. Those who do not pass its riddles are pushed off a cliff into a gorge. Can the PCs stop it, without becoming the next victims of the deep and deadly trench?

A cruel insane minotaur obsessed with riddles from its nightmarish imprisonment in a labyrinth it recently escaped, it has been amusing itself by forcing travelers to answer riddles or die by being pushed over the sheer cliffs. The number of victims is high, and so he has plenty to eat, and no desire to stop now.