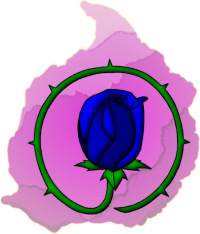 The Enchantress, The Lady of Desires, The Azure Rose

The deity of magic and desire, Quintessa (kwin-"tess"-uh), appears as a beautiful, young woman with snow-white, snake-like hair and rich, magenta eyes, often adorned with a gaudy, blue gown over black tights. She rules all that is arcane and mystical, as well as the lusts of the heart, and those who hunger for power and dominion are among her worshippers.

Quintessa teaches that there is no greater force in the universe than magic, and the unyielding desire that fuels its power; for magic and desire are forever intertwined. Through magic, one can achieve all that one's heart might wish, and through desire, one grows stronger, prouder, more confident, radiating a force of will that echoes even the most heavenly of angels, thus empowering one's magic. Yet even magic and desire have their limits, for if left unchecked, they may unleash catastrophic destruction in the wake of one who, as some might say, bit off more than he could chew.

Quintessa's clerics are found throughout all walks of life, from underground arenas to exotic dance halls to the most secret of laboratories. Anywhere where one might find a person questing for strength, power, or knowledge, one will find a cleric of the Enchantress. Wearing exotic clothes adorned with jewelry in a variety of styles, they'll aid anyone in their personal quests (for a price), charming them with their promises of wealth and prestige and leading them with their mastery of the arcane.

Temples to Quintessa are most often found in large, wealthy cities amidst bustling marketplaces. Within its cleanly walls are crafters, entertainers, warriors, rogues, and magicians, all plying their trade and offering up a prayer to the Lady of Desires to make all their dreams come true. Visitors must remember to watch their pockets, however, as some of their desires may not always play nice with the law.

Quintessa's avatars appear as beautiful, young women of any ethnicity, charming the masses and moving them to fufill their most lustful wishes and find strength in the depths of their envious hearts.