Quarlish are like humans in build, but slightly slender and taller. They have white hair and very pale skin. A commoner could say, they look like an albino. The colour of their eyes ranges from typical colours like brown or green to colours like red or violet. The other races envy the women of the Quarlish for their beauty and fine faces. The men of Quar are typically muscular and strong in build with faces cut from stone. They reach a height of 7ft. 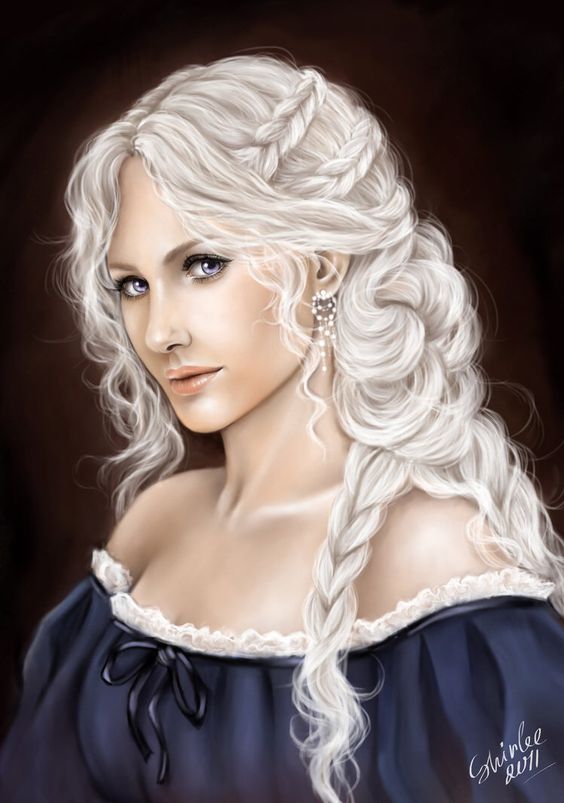 The Quarlish come from a land named Quar. Where they live in their white cities with golden ceilings. But this wasn't always the case. There was a time, in which mere humans ruled over this land as ursupers. They used the Quarlish als as workers on their own land, took education and knowledge from them as well as all their rights.

One day a single man started a revolt which sparked hope over the people of Quar like a spark in hay and the Quarlish stood up and fought for their freedom until the humans were gone and they could start living their own lives in their own land.

Soon after they found that the ground was rich in gold and other rare minerals. So the lands became rich and so became the people. They told the other races, what the humans did to them and so no one wanted to trade with the humans anymore, the humans went poor and starved in the end.

The Quarlish live in tribes which are led by the eldest of the members. Each tribe lives in an individual city which is called a hold. In society there is a strong dedication to community because there is a saying, that only together they are strong. Especially with their telepathic communication they tend to have others around them. They also honour their ancestors every day because it were them, that brought the Quarlish out of the slavery.

The fear of slavery is strong in everything they do, in the tribes there are no hierarchies, the oldest of the tribes only give advises not orders. So no one stands above another. Quar is a land, rich on mountains, which makes climbing a sport, performed by the majority of Quarlish.

They also favor grace and accuracy over brute force. The way of dancing with a sword is an art especially performed by female members of the tribes. But also other weapons are used.

The names of the Quarlish are in their own tongue but they try to keep themselves a second name which can be pronounced by other races. For this they often choose elven Names or they use the Name of their profession. Should they have more professions than one, it is a common way to melt them together.

Ability Score Increase. Your Charisma score increases by 2 and your Strength score increases by 1.
Age. Quarlish reach adulthood at the age of 25 and live up to 250 years.
Alignment. Quarlish tend to be chaotic good because of their suppressed anchestors.
Size. Quarlish are average nearly 7 feet tall, but are much lighter and more slender than humans. Your size is Medium.
Speed. Your base walking speed is 30 feet. You also have a climbing speed of 30 feet as long as you are not encumbered.
Quarlish Climbing. You have proficiency in the Athletics and Acrobatics skills.
Quarlish Accuracy. Whenever you have advantage on an attack roll you can reroll one of the dice once.
Quarlish Grace. When you score a critical hit with a weapon attack, you can roll one of the weapon's damage dice one additional time and add it to the extra damage of the critical hit.
Mind Link. You can speak telepathically to any creature you can see, provided the creature is within a number of feet of you equal to 10 times your level. You don't need to share a language with the creature for it to understand your telepathic utterances, but the creature must be able to understand at least one language. When you're using this trait to speak telepathically to a creature, you can use your action to give that creature the ability to speak telepathically with you for 1 hour or until you end this effect as an action. To use this ability, the creature must be able to see you and must be within this trait's range. You can give this ability to only one creature at a time; giving it to a creature takes it away from another creature who has it.
Lucky. When you roll a 1 on the d20 for an attack roll, ability check, or saving throw, you can reroll the die and must use the new roll.
Brave. You have advantage on saving throws against being frightened.
Languages. You can speak, read, and write Common, Quarli and one other language of your choice.

If you want to play the oldest of your tribe, who ventures out one last time at the end of his life, change the following:

Ability Score Increase. Your Charisma and Wisdom score increases by 4, and your Strength score is reduced by 2.
Quarlish Legacy. You have a strong connection to the ghost of your ancestors. You know the Guidance and the Druidcraft cantrips. Once you reach 3rd level, you can cast the Ceremony spell once. Once you reach 5th level, you can also cast the Spiritual Weapon spell once. You must finish a long rest to cast these spells again with this trait. Wisdom is your spellcasting ability for these spells.