The appearance of a Protogen's head is more rounded than a Primagen. Beyond having organic ears, other differences from Primagen include that it stands more upright and it‘s more organic. Its torso has some mechanical parts as well as organic fur around it. The legs can be thick or thin. All the body parts except the torso and head have a “plug n' play“ feature where they can replace their tail and arms with many different types of limbs, including aquatic, space, and more to work in many situations. Its facial expressions are shown through the helmet with a variety of different colors. They look like LED lights, but how they are actually powered is unknown. Protogens are 60% organic and 40% machine. 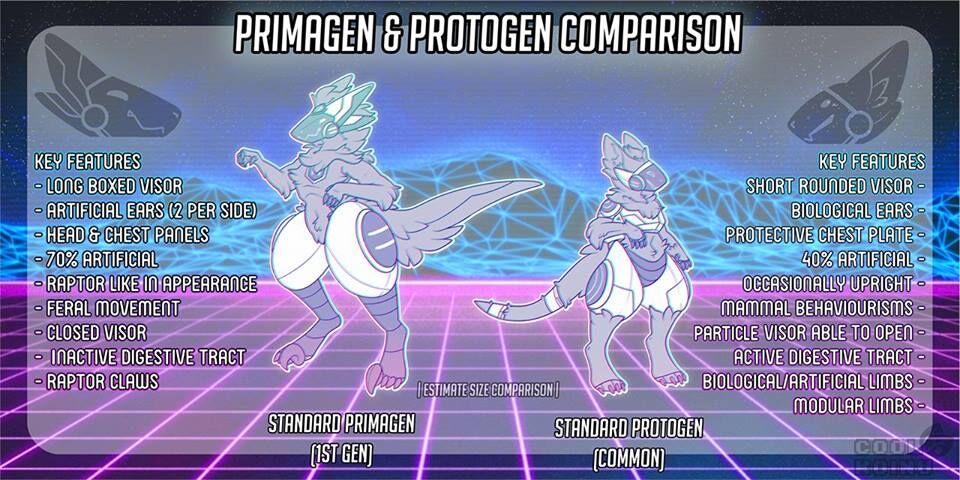 "In the dark eons of the war to end all wars, there was a group of mad scientist who with their twisted minds sparked an idea for new troops and explorers for this war on the next frontier, space. The first to be made were the Primagen, but sometime after the first creation, an accident that would leave many wondering what had gone wrong for everything seemed fine, but during this accident some Primagens and Scientists were pulled into another dimension. These stragglers began adapting to this new world they found themselves on with magic and technology they prospered, until the Crusades swept across the country side. Leading to the Primagens almost near extinction and sparking the measures they put in place. The projects they had been working on for many years finally came into effect as the Protogen were completed. The Crusade knew no bounds but with the cleverness of the remaining Primagens and Protogens they went to space seeking salvation in the stars. Primagens nowadays anywhere are exceedingly rare and one has not been seen for almost 400 years, while Protogens being more numerous are spread much more around and are much more likely to be out there still." - Noble Piece Prize winning Dr. PHD and his Collogues at the University of Anomalous Happenings

Their society similar to that of a heavily militant country is one of obedience to the CODE although strict the society prospers. Being built for war they are in a sense like War-Forged in the way the interact with society. Rumors do exist of civilian Protogen population located somewhere, but they have yet to be cooperated by more than a few sources.

Top Scientist have yet to figure out any real naming conventions.

Male: Really anything will work for the most part

Female: Really anything will work for the most part

Protogens are 60% organic and 40% machine.
Ability Score Increase. Your Strength score increases by 2 and your Intelligence score increases by 1.
Age. Not a lot is known about the life span of Protogens for none have been observed to die of natural causes. They do appear to be able to be killed but it requires a lot of effort to put them down. From analysis of a felled Protogen we have been able to rough conclude that their lifespan might exceed 500 years.
Alignment. Protogens are normally of a lawful or neutral alignment.
Size. Protogens can vary in size from rather short to just over 6 feet. Your size is Medium.
Speed. Your base walking speed is 30 feet.
Darkvision. You can see in dim light within 60 feet of you as if it were bright light, and in darkness as if it were dim light. You can't discern color in darkness, only shades of gray.
Integrated Protection. Your body has built-in defensive layers, which can be enhanced with armor. You gain a +1 bonus to Armor Class. You can don only armor with which you have proficiency. To don armor, you must incorporate it into your body over the course of 1 hour, during which you must remain in contact with the armor. To doff armor, you must spend 1 hour removing it. You can rest while donning or doffing armor in this way. While you live, your armor can't be removed from your body against your will.
Plug n' Play. All the body parts except the torso and head have a “plug n' play“ feature where they can replace their tail and arms with many different types of limbs, including aquatic (Giving you a swiming speed of 30 ft), space (15ft of directional flight in 0 gravity), and more to work in many situations at your DM's digression.
Keen Ears. Protogens have keen ears granting you advantage on perception checks relying on hearing.
Biomechanical Body. Protogens are considered both Humanoid and Constructs for all intents and purposes. Protogens are mainly organic with some mechanical augmentations.
Languages. You can speak, read, and write Common and one other language of your choice.