The largest city in all the lands (large city size, not a metropolis) , Prodigia is the site from which more resources are exported than any other port. All 500 mages have a presence here, but only a relatively small number (45 of them) actually have their towers there. The city's loyalties are divided, with different neighborhoods, docks, guilds, and the city government itself owing loyalties to different archmages. Conflicts are frequent, and the value of the resources which come in and out of the city are vast. Crime is a problem, and shifting loyalties among various city factions make it a difficult place to live in. Complicating the situation is the matter of race; there is no majority race in the city, and not all races get along very well. To make matters even worse, the city is badly crowded.

The racial situation is confusing and makes the city difficult to govern. While common is the plurality language, it isn't spoken by all races in the city. Rather than coming together, the races pull apart and have to be forced together by the fact that there is only one city for them to live in. Each neighborhood's language, architecture, economy, religion, and even what material the street is paved with can change abruptly. Distinct racial neighborhoods include the following races: human, elf, dwarf, halfling, gnome, half-dragon, goblin (in the poorest areas), half-elf, and several mixed neighborhoods.

Compounding the situation further is the massive gap between the rich and the poor between races, inside of races, and overall. Riots in the poorer neighborhoods aren't uncommon, and instead of fighting the rich (which is very difficult), the poorer inhabitants of the city are likely to take their anger out on rival races, especially if there are barriers of different mindsets and old rivalries.

With so much confusion and danger, its no wonder that not enough people live in the city for it to qualify as a metropolis; many who can afford to move do so. The other limiting factor is that much of the city's land area is devoted to the storage and processing of magical resources, thus limiting the areas that can be used for housing.

Languages: Common is the language spoken by the plurality of the population, but it is followed by elven, halfling, dwarven, and draconic in order of importance. Many other languages are spoken (by smaller groups) as well, such as sylvan, terran, aquan, ignan, and auran. 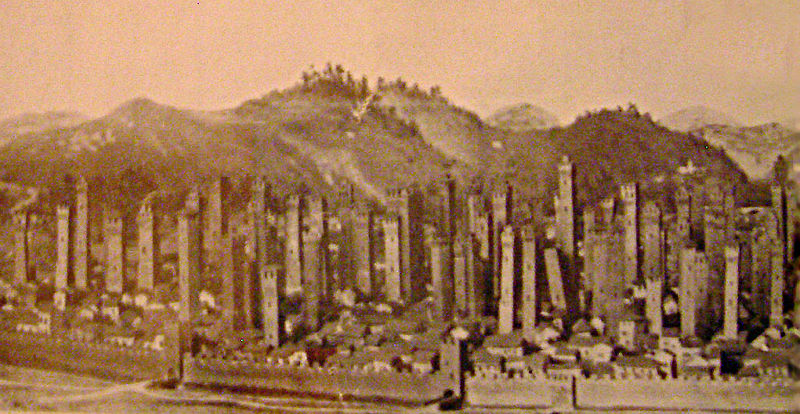 Prodigia is located on an excellent natural harbor, with the ocean to the east. To the northwest, there are hills which overlook part of the city.

Great divisions exist between all races in Prodigia.

The livelihood of Prodigia depends on resources reaching it from the rest of Praemium Terra. Raw materials are processed in the city before being exported at the docks. The major industrial products include metals, tools, weapons, magical items, and parchment. 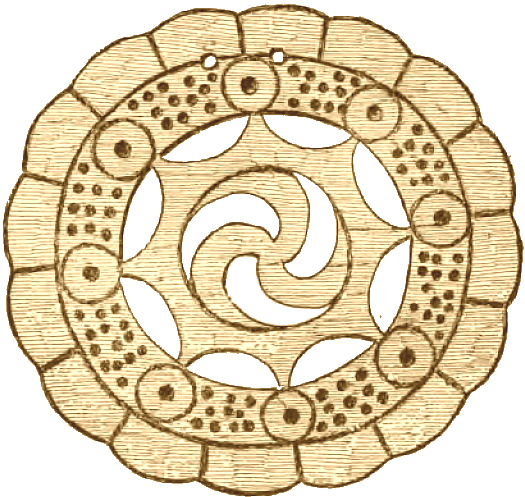 The symbol of the universalists, this pattern shows the convergence of many faiths into a single divine being.

While there is a tremendous variety to religion in Prodigia, one symbol, the eye of the future (also known as the eye of destiny) is revered almost universally by the city's inhabitants due to a prophecy concerning the ultimate fate of the city. The symbol can be found on the flag.

The prophecy states that the city will play a critical role in determining the next age of Praemium Terra, but no one knows exactly how or when this will be.

There is one major faith in the city which is virtually ubiquitous to Prodigia itself; a universalist belief which states that each deity worshiped by each religion is really just an aspect of one single divine essence, going from the many to the few, to the one.

The defenders of Prodigia are as diverse as the population, and the army of the city is able to take advantage of a wide variety of skills and strengths from various races, enabling the military to be exceptionally well-balanced in its composition.

The serious problem regarding the city's defenses is loyalty; different races don't necessarily get along well together, and they won't cooperate in the defense of the city very well unless the threat were to be so great as to unite them behind a common goal. Further compounding the situation is the fact that the Archmages have great power and armed forces of their own, and the cooperation of these forces is by no means guaranteed.

As the largest city in Praemium Terra, Prodigia has proportionately more important sites. The fact that it is the largest export city only serves to enhance its' standing in terms of important locations.

At present day, there are 27 distinct neighborhoods (including the enclave which contains the city's palace), including the non-residential areas. The city as a whole is divided into 4 main districts with 6 neighborhoods each, plus the palatial district. Each district is divided by walls whose gates are usually open and accessible, save for the palatial district for which special authorization is required to enter.

Northwest District: This part of the city is home to a great deal of industry, mostly based on the processing of raw materials for export.

Northeast District: This is the poorest part of the city, with many dockworkers and other menial laborers living here. While this area has the majority of the city's docks, the richest and most valuable cargo doesn't pass through this section. A diamond-shaped section in the middle of a wall of mage towers which surrounds it is the most destitute segment of the district; the areas on the fringes are more affluent.

Southeast District:The location of the main docks, the southeast district handles some of the most valuable cargo in the entire world. Golems can be found in this area in great numbers, acting as tireless, merciless sentries whose only duty is to protect the valuable goods.