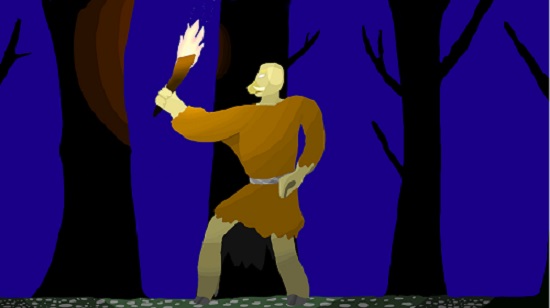 A Piglin traveling through a forest

Piglins are the ancient combinations of Human and pig, but they would say Humans are combinations of Piglins and monkeys. An average Piglin has an overall body shape of an incredibly strong Human, and reaches about the height of an average one. Piglins almost always have slightly tanned skin, which is as rough as leather. They have snouts the size of normal pigs and small tusks that come out each side of their face. They also have two large floppy ears that are incredibly fun to flick. They do not have hair on their head except for very rare occasions. Piglins eyes used to have color to them, but now are only faded white. They do not have feet, but shiny black hooves. Their hands are some strange combination of hoof and hand, but are still fully articulate and provide a small amount of protection. There are many varieties of Piglin within the Nine Hells, which will be described below.

In a time before the modern races ruled over the Material Plane, the Piglins traveled the land in search of riches. They would only mingle with other civilizations if they had gold, and the Piglins would try to lay waste to their towns if they were reluctant to give it away. Not all Piglin raids were successful, however; most were little threat to the sheer power of other ancient races. The Piglins never gave up, though, and most of the time they were given the gold they wanted out of pity. They never picked up on this, and believed themselves to be on the level of Gods. Their nomadic tribes would often meet in one location to exaggerate stories about their triumphs and plundering, which only drove their greed further.

When the older races fell or isolated themselves, the Piglins were left with no other society to bully. They would wait for the return of other massive civilizations to war against for an incalculable amount of time. At least, incalculable for most Piglin at the time. While they waited, some Piglin decided to explore the magic of the Material Plane, which unlocked an uncanny power to raise the dead. These Piglin would become some of the first true “leaders” of Piglin society, which was mainly leaderless up until then.

Among the necromantic Piglins, one grew to become the universal leader of the tribes. Their name was Korric Bog. Korric Bog had bonded the wandering tribes together by creating a global stockpile for all of their gold, which they had merely carried around on their wagons for millennia. Korric was also incredibly talented in raising the dead, and some say that they were the precursor to modern necromancers. Korric had become a menacing symbol of the Piglins, and their reign lasted for centuries. That was what Piglins eventually grew wary of: centuries. Piglins didn’t usually live beyond 60, although many didn’t die of old age in their society. Korric’s flesh began to rot off of their body, and their skeleton was clearly visible on one side of their face.

The Piglins were terrified of Korric, yet still obeyed their orders and plundered more of the rising nations for their gold. Korric began to teach others to use these unholy necromantic powers, and eventually had a scribe write down all the rituals and spells into one large tome. This tome has been lost to the ages, but some speculate that it is hidden where the Piglins let their secret mountain of gold.

As their power grew evermore, the new gods had realized the Piglins were too strong to keep around their weaker creations. The new gods had decided that the Piglins should be banished to the deepest portion of the Nine Hells: Nessus. The Piglins were forcefully dragged down into Nessus by legions of demons, losing all of their gold in the process. There they remained, forever wandering the portions of Nessus in search of gold that they shall never find.

The Piglins soon tried to find a way out of Nessus without having to brave the treacherous River Styx. Korric had disappeared when the Piglins were dragged down, but their highest advisors had rounded up all Piglins to a central part of the Nessus Wastes. They found out how to create portals that could send Piglins back to the Material Plane out of shards of obsidian. They built a portal that could fit two of them at a time in a forgotten corner of Nessus so that no demon could ever find it, and many Piglins filed into it. However, the Piglins did not realize that the gods bestowed upon them a terrible curse.

As each Piglin returned to the surface, their flesh began to rot off of their bones. Terrified, they rushed back into the portal, with their zombie kin following. The advisors of Korric scrambled across Nessus with their followers in response, forming into five main factions from five portions of the land. The newly created Zombie Piglins are a disease that spreads on contact, which makes the Piglins very suspicious of each other.

Every few hundred years, a Piglin arises that is immune to the gods’ curse, and ventures through the still-functioning Portal into the Material Plane. There they find the modern races prospering, and how they have forgotten the massive empire that Korric had built.

Piglins used to be a nomadic race before they were banished to Nessus, instead they now tend to stay in one relative area more often. They still wander the regions of Nessus, but they tend to stick to one region if they can. Piglins don’t negotiate well with demons or travelers, which isolates them from any sort of trading opportunities that could be made down there.

Piglins have a strange sense of pride and honor among their people, and are natural warriors from it. They love to tell stories of past battles, even if they didn’t win them. Their pride in battle is unmatched to their absolute greed. The most extreme of Piglings will sacrifice their own lives for the chance to find gold, but most only have a fascination with it. Any time a Piglin is presented with gold, they will most likely carefully study it, weigh it, and sometimes bite into it to confirm its authenticity. They also immediately respect any person, Piglin or otherwise, that is visibly wearing gold, seeing it as the highest form of honor.

Piglin names are usually one to two-syllable onomatopoeia, with names usually sounding like a pig-like grunt or snort. Piglins do not have different names for different genders, as it is almost impossible to tell if a Piglin is male or female. They usually refer to each other as “it”. Some Piglin also take names from devils, but this is very rare.

A race of pig-like humanoids from Hell with big muscles and bigger aspirations.
Ability Score Increase. Your Strength score increases by 2.
Age. Piglins mature at a fast rate, reaching adulthood at 10 years old. They tend to die of old age at around 60 years old if they are lucky to live that long.
Alignment. Piglins tend to lean towards neutrality, with some becoming good or evil due to other circumstances.
Size. Piglins are almost identical in size to well-built Humans, averaging at about six feet tall. Your size is Medium.
Speed. Your base walking speed is 30 feet.
Gold Gluttony. If a weapon you are using is made of solid gold, that weapon does +2 damage. If the armour that you are wearing is made of solid gold, you receive a +1 bonus to AC.
Thick Skin. You have a natural resistance to fire from spending most of your life in Nessus.
Languages. You can speak, read, and write Common and one other language of your choice.

These Piglin brave the Wastes of Nessus: brimstone, lava, and legions of Zombified Piglins. They task themselves with protecting the rest of the Piglins in Nessus by holding back the relentless hordes of shambling Undead.

Ability Score Increase. Your Constitution score increases by 1.
Siege Against the Dead. When you are targeted by an attack from an Undead creature, you gain an AC bonus equal to half of your proficiency bonus rounded down until that attack has been resolved.

Piglins who spend their time in the Crimson Forests mingle the most with demons and extra-dimensional travelers, and have learned to use their knowledge to barter, rather than their charm.

Ability Score Increase. Your Wisdom score increases by 1.
Words of Wisdom. When making a Persuasion or Intimidation check, you can add your Wisdom modifier to your roll along with any other bonuses you have. You need to finish a long rest before you can use this trait again.

Piglins who seek the knowledge of Korric reside in a valley of damned souls forever tormented by the sands of time. These souls provide disturbingly useful knowledge on the secrets of arcana, which the Piglins often extort.

Ability Score Increase. Your Intelligence score increases by 1.
Korric’s Teachings. You know the chill touch cantrip at 1st level without counting towards your known cantrips. At 3rd level, you can use the animate dead spell without the material components. Intelligence is your spellcasting ability for these spells. You need to finish a long rest before you can use animate dead again. If you have access to 3rd level spells, you can use this spell normally without needing components and without counting against your known spells list.

Nessus has its secrets, and none are stranger than the Warped Forest. Piglins who live there are odd from a Piglin’s view, and horrifying from most others. Their skin is darker than other Piglins, and their eyes glow a menacing purple.

Ability Score Increase. Your Dexterity score increases by 1.
Unstable Warp. When a creature hits you, you can use a reaction to teleport 15 feet away from the creature to an unoccupied space and only take half damage from the hit. You can use this ability 1 time before you need to finish a short/long rest at 1st level and 2 times at 7th level.

From the highest points of Nessus, the Spire Hikers move in their nomadic groups to prey upon anything edible hiding in the cracks, or anything dangerous enough to be used as a trophy.

Ability Score Increase. Your Dexterity score increases by 1.
Natural Climbers. You are not affected by Difficult Terrain that is nonmagical in nature.
Aerial Observers. When you make a Perception check with a viewpoint higher then what you're observing, you add your proficiency bonus to that check even if you already have proficiency in Perception.