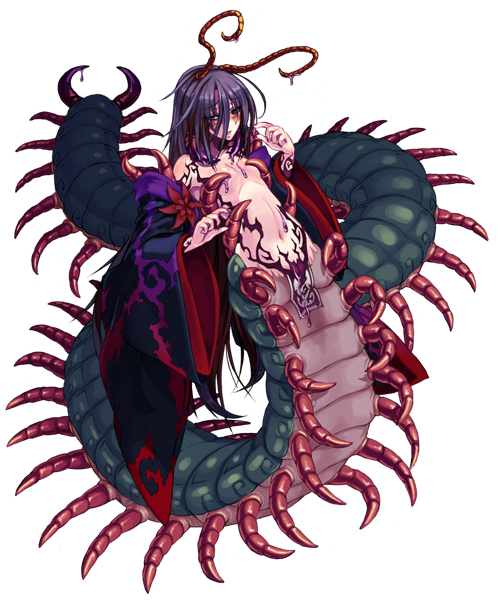 Oomukade are beautiful humanoids, usually women, with the lower body of a centipede. They are known to have an aura of dark feelings around them, like jealousy and hatred. They often have antennae on their head, but the rest of their upper body is deceptively normal. They have potent poison within their bodies that they use to hunt. When they spot prey, they use the mouth of their upper body, along with the maxillipeds around their necks and at the tip of their tail to bite and inject poison into the pray’s body. Their tongue is actually hiding a stinger underneath which helps them to snag prey when biting.

They are known to reside in the Underdark. From drow records, oomukade have been known to fight with driders. It is not clear where they originate, but the general agreed origin is Kara-Tur. It is said that they are actually evolved from spirit centipedes. The Celestial Bureaucracy would use spirit centipedes to infect and burrow into the souls of heretics and sinners, morphing them into oomukade and damning them to a life of living like a monstrous bug.

Sore over their punishment, oomukade are known to have a melancholy, depressive disposition. However, they also have a ferocious nature at the same time, and can be extremely territorial, much like a beast. When they spot prey, they aggressively assault and are known to die first rather than let go. Their natures are believed to have become bestial as a result of their curse. However, within them remains the shame of having been cursed. They have grown to prefer dark, wet places, like the Underdark. They are solitary and rarely leave the comfort of their burrow. Some have been known to live in shadowy woods deep in the mountains or in caves and such.

Large centipede monstrosities with a knack for poison.
Ability Score Increase. Your Constitution score increases by 2, and your Dexterity score increases by 1.
Age. Oomukade mature quickly, reaching adulthood at the age of 6 and rarely living past a single century.
Alignment. They try to stay away from others and tend to be neutral.
Size. The human portion of an oomukade is about 4 feet tall. The length of their bodies can be as long as 12 feet, but they never stand taller than 5. Your size is Large.
Speed. Your base walking speed is 30 feet.
Centipede Half. Your creature type is monstrosity instead of humanoid. Even though your size is Large, your upper, humanoid torso is still of similar scale to that of other humanoid races. You count as Medium for the purposes of wielding weapons. In addition, due to your lower body, you cannot make use of mounts.
Superior Darkvision. You can see in dim light within 120 feet of you as if it were bright light, and in darkness as if it were dim light. You can't discern color in darkness, only shades of gray.
Sunlight Sensitivity. You have disadvantage on attack rolls and on Wisdom (Perception) checks that rely on sight when you, the target of your attack, or whatever you are trying to perceive is in direct sunlight.
Bite. Your maxillipeds around your neck or at the end of your tail are natural weapons, which you can use to make unarmed strikes using Strength or Dexterity (your choice). If you hit with it, you deal piercing damage equal to 1d4 + your Strength or Dexterity modifier, instead of the bludgeoning damage normal for an unarmed strike.
Poison. If you hit a creature with a bite attack you may inject your prey with poison. The creature must make a Constitution saving throw. The DC for this saving throw equals 8 + your Constitution modifier + your proficiency bonus. A creature takes 2d6 poison damage on a failed save. If the target is reduced to 0 hit points by this attack, the target is instantly stable but paralyzed for 1 hour, even after regaining hit points. The damage increases to 3d6 at 6th level, 4d6 at 11th level, and 5d6 at 16th level. After you use your poison, you can't use it again until you complete long rest.
Languages. You can speak, read and write in Common and Undercommon.