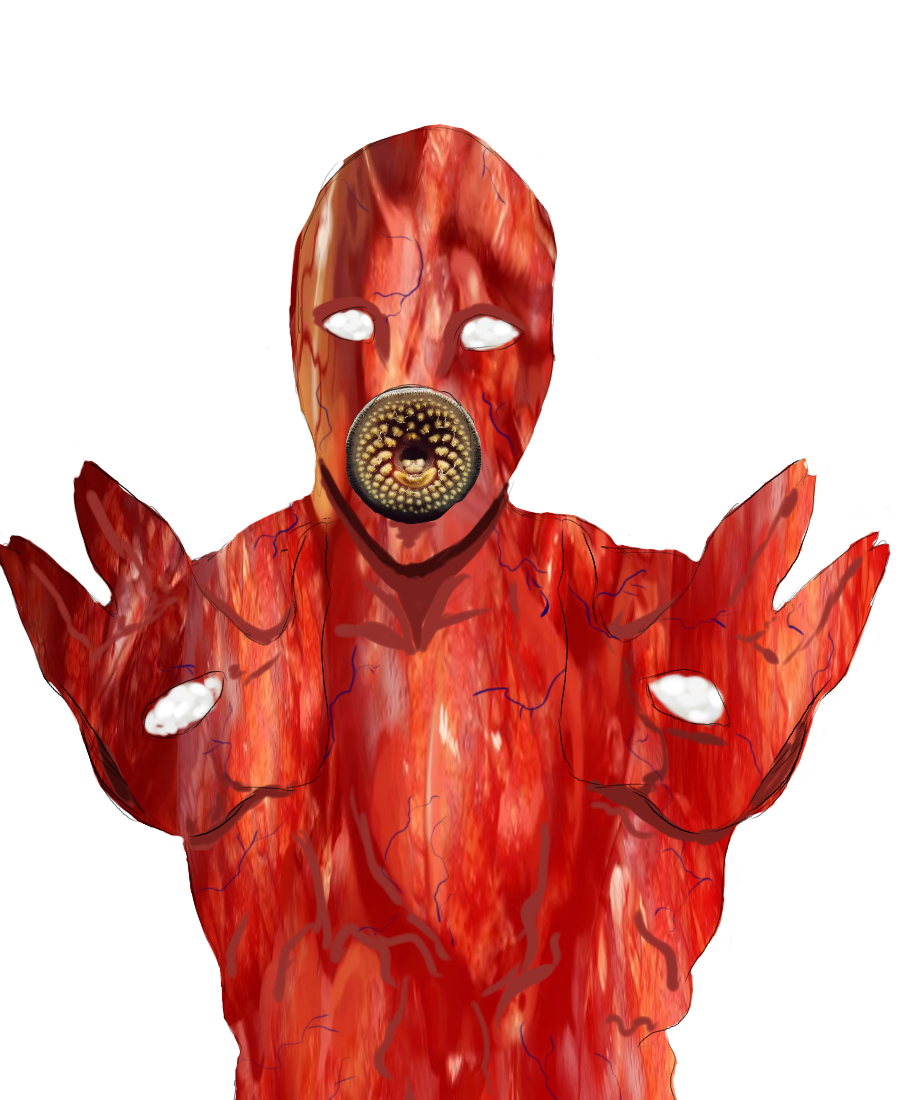 Having been subject to a horrible change, omoseers only vaguely remain their humanoid shape. Their exterior is fleshy with a translucent sheen, with their vessels and bodily fluids being slightly visible. Whatever skin they had as a human is now like a clinging film on their body, and they are completely hairless. The face of an omoseer is ghastly, with pearly white blank eyes, no nose, and a circular mouth like a lamperey. Their arms are longer than normal, and very flexible like tentacles. In their palms is another hidden pearly eye. They have three fingers per hand, which appear as though digits were melted together, and their toes have fused entirely.

Omoseers are the unfortunate saps of humans who were mutated by mind flayers. Not all humans are viewed as suitable hosts for mind flayers, particularly those who are too weak or old. These are selected to either then become food or lab rats. As part of their experimentations, mind flayers were always trying to create new thralls and monsters to do their bidding. One such experiment took place in a now-extinct colony where they submerged humans in the elder brain pool to see what this would do, as an alternative to ceremorphosis. The result was a warped creature now known as the omoseer. Their bodies have been thoroughly changed by the juices from the brain, and their minds are not entirely intact either. Their memories and personality were believed to have been nearly wiped away from the psionic fluid.

At first, they were used as slaves alongside others like quaggoths. However, the mind flayers never expected this metamorphosis to have a side effect. It made the omoseers' brains not only inedible to them, but they also became resistant to the psychic powers illithids relied on for dominion. All they needed was a small bit of consciousness to foment an uprising. When the day came, the omoseers rose en masse and fled from their masters, scattering into the Underdark. It is said some were able to return to the world above, but the metamorphosis had alas made them photophobic. Many thus remain in darkness, and many have developed a strong hatred for all aberrations.

They have a few small encampments down in isolated pockets in the Underdark, away from drows and other beings associated with mind flayers. Omoseers have a slight connection among themselves as well as a sensitivity for the brain activity of the Far Plane outsiders. This aids in their survival against the illithids. They often stage raids on the drow slave camps and mount small offenses against mind flayer colonies, but their numbers within their groups are often too small. They are regarded as little more than nuisances.

Omoseer groups live without many boundaries of private and public life. Holed up in their caves, they are polyamorous and indiscriminate with their emotions. There is little law that keeps them bound, save for their shared feelings against mind flayers. They organize into hunting parties when plotting attacks and such. They also welcome outsiders sometimes, especially if they are adventurers looking to strike at mind flayers. People who have visited note they live a rather sparse lifestyle, with little clothing and rudimentary weapons made of stone. Their greatest weapon is their hatred and resistance against mental influences. In addition, omoseers also can read and write the language of mind flayers, Qualith. While they are not telepathic, this allows them to sometimes decipher any written messages sent between illithids.

On the surface world, while there are few omoseers, some do brave the sun in search of either help or a better life. They will dress more to escape from the day's rays, often traveling most at night. Many go about preaching of the horrors which the Far Plane harbors, and the threats they pose, not just mind flayers. They have been known to ally with githyanki and githzerai forces, as well as even shardmind, to strike back at their former masters. Their original self is nigh gone now. All they remember usually is the pain and hollowness from missing what they once were. With that comes a burning desire for vengeance.

Having taken on a good deal of illithid culture, omoseers usually take to names derived from aberrant tongues. They distinguish between gender, however, unlike illithids. Some who are re-exposed to upper world culture usually change their name.

Former humans mutated by an elder brain's fluids
Ability Score Increase. Your Intelligence score increases by 2, and your Dexterity score increases by 1.
Age. The metamorphosis shrunk the lifespan of an omoseer as it is, meaning few live past 80. Due to their risky lifestyle, few will reach that end.
Alignment. While they do hate mind flayers, omoseers are not afraid to get their hands dirty to get what they want. They are typically neutral.
Size. Omoseers still have their general original human size conventions. Your size is Medium.
Speed. Your base walking speed is 30 feet.
Superior Darkvision. Omoseers have lived so long in the dark that their senses are on par with that of a drow. You can see in dim light within 120 feet of you as if it were bright light, and in darkness as if it were dim light. You can't discern color in darkness, only shades of gray.
Sunlight Sensitivity. The process which changed you also made you adverse to light. You have disadvantage on attack rolls when you, the target of your attack, or whatever you are trying to perceive is in direct sunlight.
Aberrant Awareness. Your mind is attuned to pick up the waves emitted by that of your worst enemies. As an action, you can sense when an aberration type creature is within 30 feet of you. You received only the general sensation they are there, but you do not know their identity or their direction from you.
Resistant Mind. Having absorbed juices from an elder brain has made you stronger. You are resistant to psychic damage. Additionally, you have advantage on saving throws against being charmed.
Hidden Eye. Your extra eyes on your palms help you see at odd angles to perceive more. You are proficient in the Perception skill.
Languages. You can speak, read, and write in Common. You can read and write Qualith.