The old graveyard of Redford is all about the atmosphere: if you've got graveyards in your campaign setting, then this will be a good fit. There are few fights (but they're important), and they can easily be modified to suit your and your setting's needs. Works well both as a one-off adventure or as the culmination of a mini-campaign against "Sir Grandier". Note that the fights are few, but meant to be hard: don't exceed the suggested maximum character level.

The party is expected to enter the graveyard to deal with a ghoul infestation (possible though of as evil spirits by the locals), and will likely descend into the depths to make sure their genocide is complete. Whilst doing this, they learn of the self-proclaimed king of the graveyard, Sir Grandier, and investigate more.

The oldest surviving part of Redford. The graveyard has stood on the same place since the first years of the city, and the old tombstones and crypts have preserved strangely well. Myths and fairy tales envelop the graveyard in a mist of secrecy, and folklore tells of ghosts and hauntings.

The quest starts with the party entering the graveyard (either through the gates or over the fence), fights ghouls, enters the crypt and faces their master. The mood should be oppressive and dangerous, right up until the end, where the tone can be taken to downright farcical. 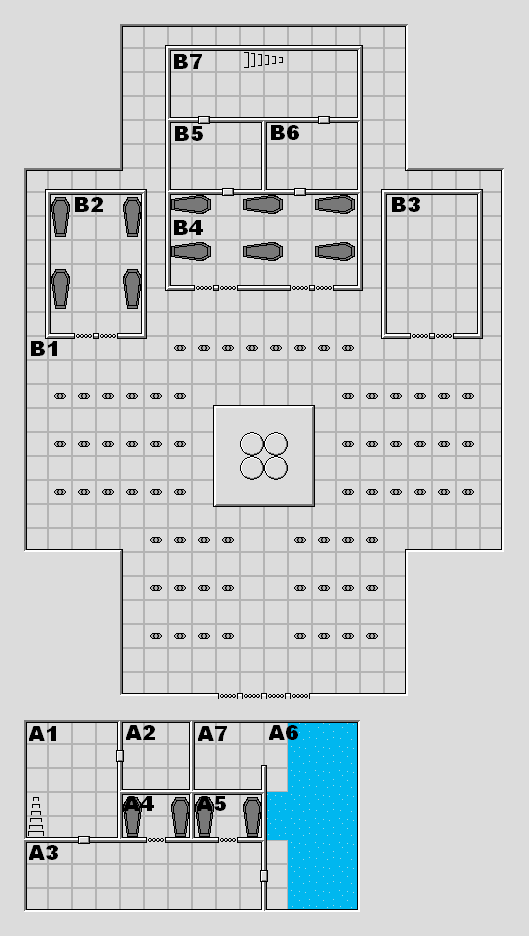 The ancient graveyard is located about a mile south of the Old Gate of Redford. The gates are locked (hardness 10, 30 hp; Open Lock DC 23 to open, Strength DC 24 to burst), but don't really need to be: stories of hauntings keep all but the most hardened of people away. The entire graveyard is surrounded by a 10ft. high iron fence (Climb DC 15 to ascend), so overgrown that it can't be seen through. The graveyard is located in an out-of-the-way groove, meaning that it's misty year-round.

You descend into the musky crypt, expecting cobwebs and dust by the wagonload. Instead, you come to a relatively clean room, its walls decorated with stone cut-outs of Redfordian prehistory. There's a door to the east and another one to the south, both surrounded by a semicircle of salt - perhaps a magical defense? The fact that the southern semicircle has a swept-away streak running through it doesn't lift your spirits.

Either the protective salt really works or the door's lock has held fast for an incredibly long time, but this small storage appears unmolested. The ancient scrolls still hold to their covers on a stone bookshelf, however barely, and goods both broken and intact can be found amongst the remains of a long-rotten table. An iron casket sits in the corner.

15ft.-by-15ft. room, 8ft. high. Bookshelf (A1-2), containing manuscripts and grimoires in many languages and many subjects; hidden between the pages of a history book a scroll of mage armor (Search DC 25 to locate) and behind the bookshelf a enlarge person (Search DC 30 to locate). The remains of a table (C1-2), with broken goods, several intact candles, a vial of alchemist's fire and a cracked hourglass. An iron casket (C3), containing several hemp bags with alms and offerings of small-denomination coins in them (worth 400 gp altogether).

You gingerly throw open the door to the next room, and find it unbelievably lit. The many braziers that flank the hallway must be magically maintained: the fire, which must have roared in the crypt for hundreds of years, burns smokelessly and with a blue edge.

Finally, the cobwebs you were expecting! Thick sheets of silk run in the ceiling of this small chamber, which makes you nervous - why aren't there webs anywhere else? The two sarcophagi in the room are web-encrusted, but closed.

The gibbering mouther feeds on graverobbers and others foolish enough to have descended into the crypt. It attacks the nearest creature, attempting to swallow them as soon as possible while spittling on anyone attempting to approach. The web in the hallway makes it difficult to help the one whose caught in the room alone with the monster. Stupid and territorial, the mouther fights to the death.

Unlike the other chamber, this one is as free of webs as the rest of the crypt has been. The light pouring in touches upon two sarcophagi that are propped up against the sides of the low room.

Cool, clear water ripples before you, its perfection rather diminished by the many headless corpses floating in it. This is where the bodies of those inhumed in the crypt must have once been washed. There must be something magical about the water, since the corpses in it remain unputrefied and the water itself is clear to the point you can count the loose pebbles on the bottom, despite the headless condition of its current inhabitants.

20ft.-by-40ft. room, 8ft. high, pool 4ft. deep. Steps leading into the water (A1-C1, F1-H1). Twelve well-preserved corpses floating in the water, still with their clothes on (acolyte robes and priestly garments) and bearing the wounds of their death (each has lost a head; Heal DC 10 to notice that the heads have been specifically chewed off by a Medium creature).

You step to the room over a broken-down wall and door. Amidst the remains of a broken sarcophagus stands a hideous, yet mystifying sight: a tall crystal container topped and bottomed with shining brass, and with a small brain floating in some off-color liquid in it. The movement of the liquid and the refraction of the glass makes the brain appear to undulate slowly. To its side stands another one of the corpse-eaters, but instead of animal rage or cannibalism, this one is in the middle of polishing the container with a rag.

15ft.-by-15ft. room, 8ft. high. Remains of broken sarcophagus (A1-2, B1-2, C1-2) which counts as difficult terrain. Sir Grandier, a brain in a jarLMo who can't fly (speed 0 ft.), sitting on a low pedestal at the back of the room and attended by a mindbroken ghast. Several beautiful treasures have been removed from the other rooms in the crypt and around the graveyard and brought here, notably a gilded statue of Auri (worth 200 gp), four silver-rimmed tea cups (worth 150 gp altogether) and several fancy pieces of jewelery (worth 300 gp altogether).

The brain in a jar is demented, as most of its kind are, and mentally dominates the ghast (and by extension many of the ghouls in the graveyard) to follow its commands. It demands tribute and subservience from those who enter, and if this is not shown (or if it feels provoked, which is common due to its madness), it lashes out. The ghast protects the brain in a jar, which starts the fight by reanimating the twelve headless corpses in the washing pool as zombies.

The brain in a jar can't move, so it attacks foes by using dominate person (and ordering them to wash their filthy selves in the pool) and suggestion (to kneel and worship the brain). Those who get close get a taste of the brain's mind thrust. Meanwhile, the ghast attacks those who come close to the brain, rarely leaving its side, and the zombies surround foes and take them down by numbers alone. The mad brain never relents in its assault, even forcing the ghast to carry it if foes attempt to escape, and screams obscenities and demands of worship all through the battle.

The yard that opens before you has stone graves, some broken, some intact, jutting out of it like so many hideous teeth. The place might once have been grand, but the years have been hateful: the iron fence has become so infested with vines that it can't be seen through; the gargantuan statue in the middle of the graveyard is so eroded as to make it impossible to guess whether it depicts man, god, or something else; and most worryingly, many of the graves have been dug open.

(before the main crypt) The ruin that once was the front of the graveyard's largest crypt is long-sullied, but the latest graffiti addition makes you nervous: filth and blood have been used to write "the castle of Sir Grandier", and below it, "interlopers will be beheaded".

Seven ghouls are picking through the open graves and digging new ones, searching for an exquisitely rotten meal. They are not actively expecting a fight, but will defend their haunt furiously, screaming a guttural warcry of "Sir Grandier provides!" The seven work together, starting fights by throwing rocks (+3 ranged, 1d4+1 damage, range increment 10 feet), and then attempting to paralyze as many foes as possible in melee. When a couple are downed, the rest ascend to the tops of the smaller crypts and continue the rock barrage.

The doors of this crypt have held against the ghouls that have ruined the rest of the graveyard, as the peaceful, dusty quiet of the crypt attests. Four unmolested sarcophagi rest against the walls, with stone tablets proclaiming the inhabitants' long-forgotten names above them.

The once-barred doors of the crypt have been cast down and ripped from their hinges to accommodate the ghouls that have made this peaceful crypt their decidedly unpeaceful lair. The sarcophagi have been smashed to pieces and their possible inhabitants devoured, with the stone remains arranged in the back into rough nests cushioned with flayed hides, broken bones and other filth.

This crypt is similar in design to the others in the graveyard, except larger in scale. The sarcophagi have been tampered with but stand as of yet unbroken, a testament to the masonry of old. Two doors at the back lead deeper into the crypt complex.

B5 and B6 - Preparation Room[edit]

Gods, the air here is foul! It's like the stench of the ghouls from before, only so much worse. You fight against your gag reflex and study the room before you. The only furniture in the room is a massive stone slab with a rough human shape cut into it - the rest of the furniture is long-rotten. Instruments lie on the floor in the dust.

This must once have been the altar of the graveyard: a religious center. Now it's been reduced to a blasphemous state: the god-figure at the back has been mauled to pieces (with the words "Your only god is Sir Grandier" written in blood above it) and the stone rise below it, once reserved for offerings, has been violently dragged aside, revealing a passageway to below the graveyard.