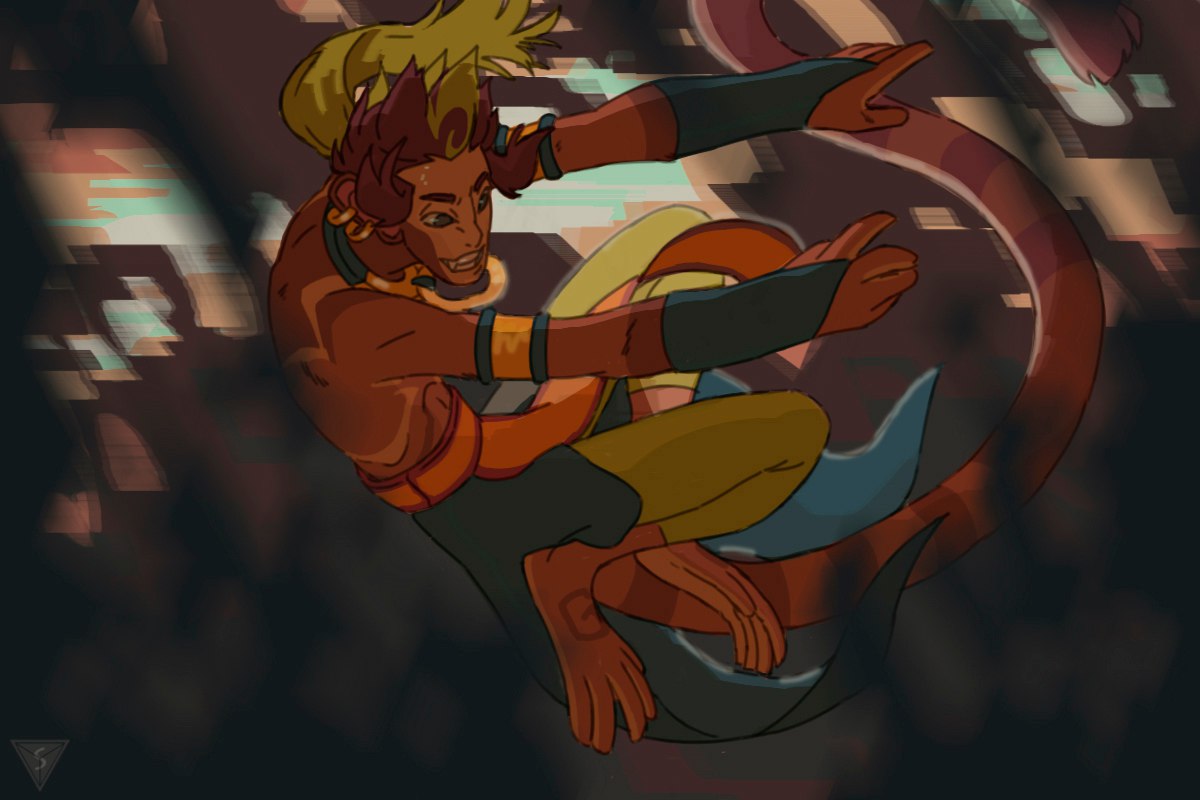 Climbing trees, picking flowers, looking for fruit;
Throwing pellets, playing knuckle-bones;
Running round sandy hollows, building stone pagodas;
Chasing dragonflies and catching locusts;
Worshiping the sky and visiting Bodhisattvas;
Tearing off creepers and weaving straw hats;
Catching fleas then popping them with their teeth and fingers;
Grooming their coats and sharpening their nails;
Beating, scratching, pushing, squashing, tearing and tugging;
Playing all over the place under the pine trees;
Washing themselves beside the green stream.
-Journey to the West

Climbing the high-reaching trees of distant and remote mountain forests, the Njucto are human-like creatures that stand around 5 feet tall and are often mistaken for primates at a glance. However, their sturdy limbs, hand-like feet, thick 3 to 4 foot tail, and hirsute bodies clash with their more human-like propensities such as speech and bipedal locomotion. Njucto sport fur types between thin to shaggy and ranging from browns and whites to oranges and blacks. Njucto enjoy accentuating their bodies with shaved or dyed patterns in their fur or markings on their skin.

Below their hair, a Njucto's complexion ranges from pale weight through pink, brown, and down to shades of dark gray. Their faces are scrunched with a pronounced jaw but lacking a prominent nose. Their simian features grant them a degree of flexibility and agility that they utilize constantly. Njucto males and females favor the same fashions of tree leaf dyes, fine clothes, and crafted jewelry, only dividing on appearance with specific colors or markings based on their community.

Though the Njucto rarely keep written records, tales (both oral among themselves and written among other civilizations) speak briefly on the origins of the race.

Whether crafted from the trees and clay of the places they call home, ejected from the sky in punishment for their near-impish disposition for trickery, or warped in years past from mundane creatures, the Njucto's earliest beginnings trace back to subsistence, reclusive clans.

However, the Njucto marked themselves as noteworthy with the mythical rise of their legendary figures. Starting with the most iconic of these figures, a Njutco, born from solid rock, grew so powerful and wise that he duped dragons, misled mighty warriors, and scandalized the gods' affairs in their heavenly abodes. Other stories paint depictions of Njucto acting as near divine agents, straddling oceans in a single leap and fighting hordes of demons in the name of honor and friendship. Although these mythic figures faded into the annals of history, the Njucto keep those same keen, rapacious instincts.

As these great figures spread their capricious legacy in times past, so too do the Njucto today. Atop the tallest peaks, amid the densest jungles, and buried in the hottest savannas reside monasteries, trading posts, villages, and clans comprising mainly of Njucto. Even staying within their homelands, the race values a coy disposition in both dealing with the familiar or strange, the domestic or foreign. Every so often, a few Njucto take their vigor to an extreme (though this is rare) and emblazon their name in legend with their exploits. Whether rising to a heroic adventure or becoming an infamous warlord, they strive for the sake of remembrance in-spite of notions of good or evil.

Wherever their location, the Njutco live in secluded and distant enclaves. Lacking robust cities, stern laws, or traditional nations, they collect in clans, the smallest often a single family, to larger groups of several. These clans keep order among themselves, migrating little save for issues of food or safety. From day to day, they entertain themselves with recreation, meager trades or professions, and, above all, humor. Between their own families and groups, the more prominent members pride themselves on mental tallies, scorns, and paybacks to those who've one-upped or embarrassed them. Even among the stricter settings such as a Monk's school or a trader's caravan, Njucto issue these ploys among each other in more subdued but equally as humorous methods. Because of their impulsive manners, Njucto make a mixed bag of acquaintances during their travels based on whether their jovial tones and tricks were treated with admission or disdain. As a result, Njucto walk between towns and villages with a careful eye tracked on their backs. Among their own kind, Njucto garner an impertinent interest in each other's travels, comparing and contrasting the strange tales they've both witnessed and partook in. Despite their isolated communities, Njucto seek precious gems, cloths, and the like for their near obsessive fascination with fashion. To these lengths, Njucto trade their goods, expertise, or service.

Njucto spend most of their lives with a lone name given at birth. They do not often carry family names, but instead refer to locations that differentiate between others of their race. However, the most adventurous, daring, and prideful Njucto take bombastic secondary names accompanied by a title to compliment their magnified egocentric attitude, treating their original name as a stepping stone uttered only by familiar or unknowing people.

Locale Names: Of the Green Swamp, Between the White Peaks, From Kishkindha, Of the Mountain of Flowers and Fruit, From Beyond the Jade Ocean, Over the Sand Divide, Descended from Heaven's Tree

From the remote edges of civilization, these monkey-like creatures climb and trick their way to notoriety.
Ability Score Increase. Your Dexterity, Wisdom, and Charisma scores each increase by 1.
Age. Njucto reach maturity around age 14 and live slightly shorter than a human, though some elder Njutco have been known to push past a century.
Alignment. Njutco resonate with others at a personal and fickle level, whether it be friends, masters, or family. As a result, they have little interest in laws, focusing more on neutral or chaotic alignments.
Size. Njucto are compact and lithe with sturdy limbs, standing between 4'6 and 5'6 feet tall. Your size is Medium.
Speed. Your base walking speed is 30 feet.
Four is Better than Two. Your highly dexterous appendages allow you to utilize your feet as free hands (for a total of 4 hands); you cannot wield weapons or shields with more than two hands at a time, but you can use them for activities such as (but not limited to, at DM's discretion) grappling, casting spells with somatic components, performing an object interaction, or loading a crossbow. Unless hanging or grappling to a person or object, you must have at least one hand free to stand; if you do not, you fall prone. Moving with only one free hand in this manner reduces your movement speed to 10 feet as you hop and hobble along. In addition, for grapples you initiate, you may use a Dexterity (Acrobatics) check in place of a Strength (Athletics) check to start and maintain it.
Nimble Climber. You sport prehensile feet and a thick tail appropriate for your fairly lithe and short body; these manipulative limbs allow you to climb with ease: you have a climbing speed of 30. To use this speed, you can't have your hands occupied.
Trunk Tail. While your tail cannot be used as a free hand, it is lengthy and manipulative with a reach of 5 feet, allowing you to snatch and carry appropriately sized and light items or suspend yourself from latch-able hangings like trees, branches, or beams.
Counterweight. Because of your tail's balancing act, you have proficiency in the Acrobatics skill.
Languages. You can speak, read, and write Common.