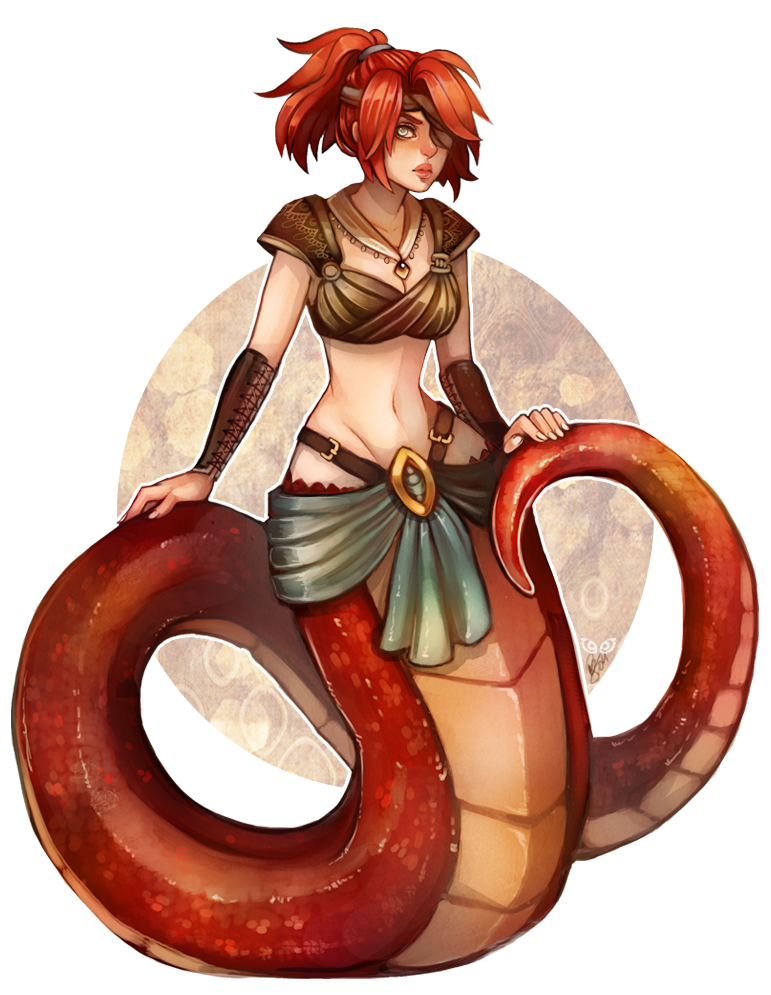 Some naga yearn for something more than taking care of others, despite their supposed relation to the deity of refuge. Some are adventurers, some are scoundrels.

When Isis wrought the great nation of Sol, she regretted that she would not be able to watch over the nation that she had formed for her wards. She looked upon those that thrived under her protection and guidance, and wished to bless the nation with some portion of her that would live among them, protecting them forever in the spirit of her ideal of Refuge - to this end, she had a child: The first of the naga, Isis II.

The original naga, and each naga descended from her bloodline, is gifted with extraordinary ability and a divine power that she dedicates to governing and protecting the ancient nation of Sol, and is further protected by the 12 Aspects of Isis. Because the Aesirean Naga bloodline maintains some aspect of divine power, less than that of a demigod but still enough to set them apart from mortals, each Empress of Sol exists alone, until they birth a child, and then shortly thereafter perishes.

Over time, and under circumstances that have never come to light and public ear, other sentient creatures that resembled the original bloodline began to appear. While they lack the longevity and divine power of the Empress, they undoubtedly have an extremely similar appearance, leading many to believe they are also descended from or the product of the gentle goddess.

The people of Sol widely regard the naga as a friendly race beget from their chief deity and protector, and often treat them especially kindly and with good regard, even to the point that any disenfranchised naga in Sol can reliably find a good dinner and warm bed if they ask. Naga typically are received well by those familiar with the Aesir, as Isis is a notably good-natured and relatable deity, and their supposed relation to her benefits their image in the minds of others. Even those who disapprove of the Aesir, such as followers of the Pantheon, are less likely to scorn a naga than those who are associated with less wholesome deities of the rogue gods. Still, more militant members of cults and extreme religious organizations, especially those outside of the Solean Empire, do regard naga with suspicion, or at worst, as a heretical abomination.

While most outsiders would be hard-pressed to remember the details about the three sub-species of the race, most are familiar with them. Each sub-species has a given name in the naga tongue, based around the Naga word of 'Ka', meaning "Tail". While few other races acknowledge these names, they are as follows:

The Dhrijamka, "Mother Tail," or the "Aesirean Naga", is the title given to the bloodline of Empress, the direct descendants of Isis. There is only two, at most, of these individuals at any given time, and in most cases only one exists in the mortal sphere. These naga are the leaders of the Solean Empire, and are blessed with the power of their common ancestor.

The Hashka, "Sand Tail," are the "common naga", and are often the most easily identified; Unlike other naga, they maintain a stable birth-rate between males and females, and typically typically have around the same range of personality as any human. Whole villages exist that are comprised entirely of Hashka, and they are usually able to seamlessly integrate into other societies with little difference between themselves and others, aside from superficial. They often express a wide-range of differing views on the world and any given scenario, and as such, tend to integrate easily into societies that welcome them. Much like other races, however, they can also react hastily or become hostile under circumstances that put them off. Many Hashka set off on a journey out of their homeland when they reach adulthood, in order to make memorable or new experiences and to ultimately find a home of their own.

The Sishka, "Dragon Tail," are less common than their more moderately-sized brethren, and have a disproportionate birth-rate favoring females over males. Often called "Leviathans" by those not familiar with their racial dichotomy or native tongue, these naga are often feared from afar, due to their large size and power. While they are no strangers to conflict, and have been known to preside over conflict in the past, these individuals are largely very spiritual, and most find spiritual guidance in the Goddess of Refuge. This usually leads individuals to either seek hermitage or to become sages and priests at whatever locale they find themselves to rest in. Sishka rarely travel, and if so, tend to do so by larger means of transport, due to their weight and size. 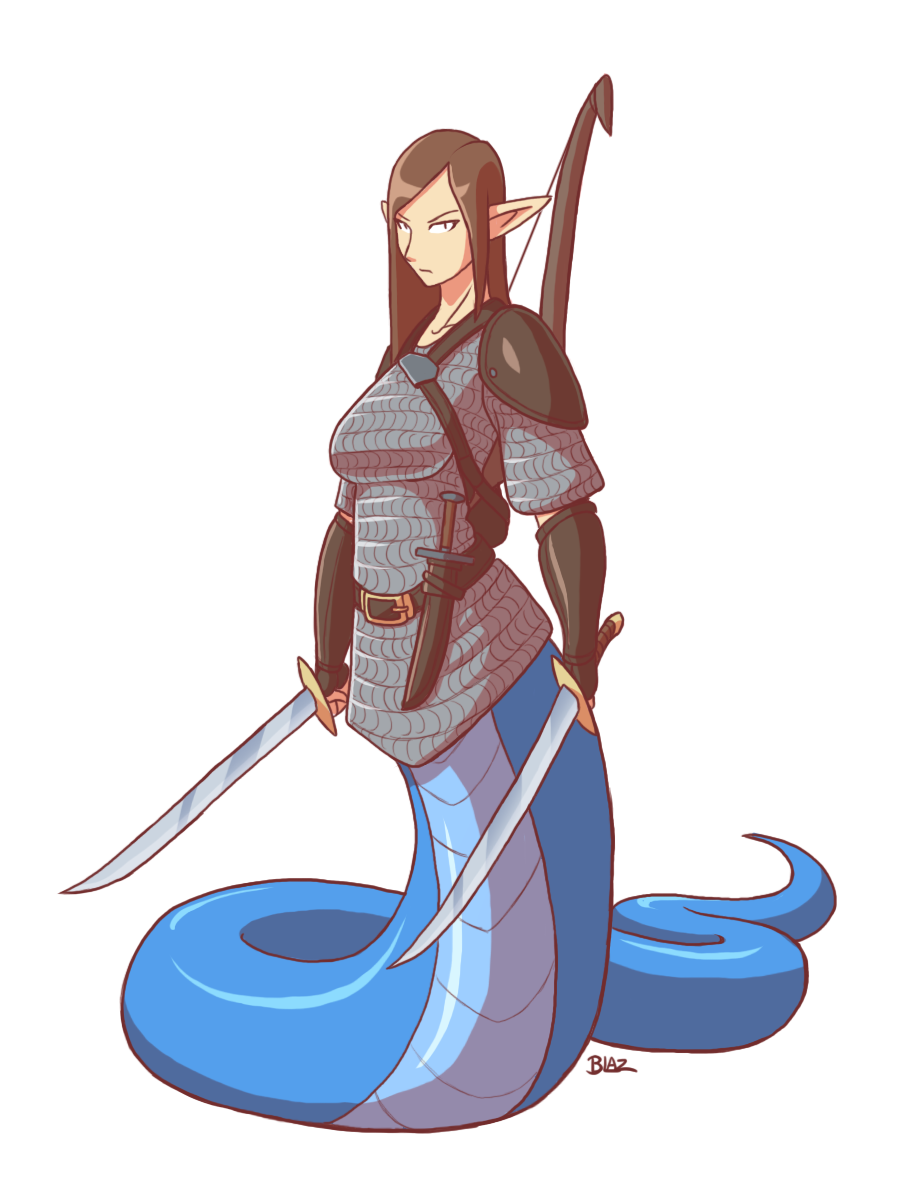 A Hashka ranger, prepared for battle.

Naga can be described, summarily, as a humanoid who mostly resembles a human, from the waist up. Below the waist, just at the gap of the hips, extends a long, muscular tail, covered in scales, akin to a snake. While individual sub-species may differ in other traits, they all display these same qualities. While Naga are oftentimes much longer than the typical height of humanoids their size, and weigh much more, their long serpentine tails can only support so much weight - they typically have an optimal 'standing' position that most consider to be their measureable height.

The Dhrijamka, given her position, is rarely seen or approached by the common members of the public. Although rare, some public events have occurred in the past, and some members of the court and high-ranking visitors of other nations have been privy to catch a glimpse of her appearance from time to time. Statistically, all Dhrijamka to date have been female. All known appearances have shown that most, if not all, Dhrijamka have a similar appearance to that of their progenitor's most common avatar, bearing white hair, white scales, and a fair complexion.

The Hashka, or Common Naga, are typically only slightly "taller" than the average human, and most often rest upon their tails at a similar height to most other folk of medium size. Hashka often tend to have a dominant chromatic pigment to their scales, eye color, and hair color, and many Hashka take a special bit of pride in their coloration - even to the point of developing crude, playful horoscopes based on the colors of their tails. Less often, and mostly in the case of pairings between Naga and other races, some Hashka may have a mixed color pigments with no distinct dominance, such as having brown hair with cerulean scales and green eyes. Hashka develop a set of fangs and venom-pouches as they grow beyond puberty, with a potency similar to a snakes - a feature unique to them among the naga. Hashka, in adulthood, are usually between 10 to 15 feet long, and often weigh somewhere between 300 and 500 pounds, altogether. While body types can vary, most Hashka tend to be more lean than muscular and without excess fat.

Sishka, or Leviathans, are much larger than other types of naga, more comparable to Kerani and giants than humans and other races in terms of stature. They are closely related to the Hashka, and are a branch deviating from the more common naga, genetically speaking, with the Sishka being a recessive trait, occasionally passed on to offspring. Sishka do not follow the same dominant pigment schema that Hashka often exhibit, but instead often have patterned scales along the length of their tail, and occasionally have small patches of scales around their waste, fore-arms, and neck. These scales are typically more pale in color or inclined to follow darker, deeper tones. Sishka also have a high probability to develop horns, and fins or fur along their tails, and scaled claws, reminiscent of some species of dragons. While they are similar to their smaller brethren in many ways, the Sishka have a disproportionate birth-rate between males and females, resulting in only 1 in 12 Sishka whelps being male. The Sishkas' immense size, paired with their more peaceful and spiritual natures, often leads to a more relaxed lifestyle among many of the would-be Leviathans; while they do take pride in their appearance, as any race is wont to do, it is not uncommon for Sishka to take on a more full-figured shape. Sishka, when they reach adulthood and throughout, usually reach a length of 20 to 25 feet, with thick coils to match their usual weight of 800 to 1,100 pounds. 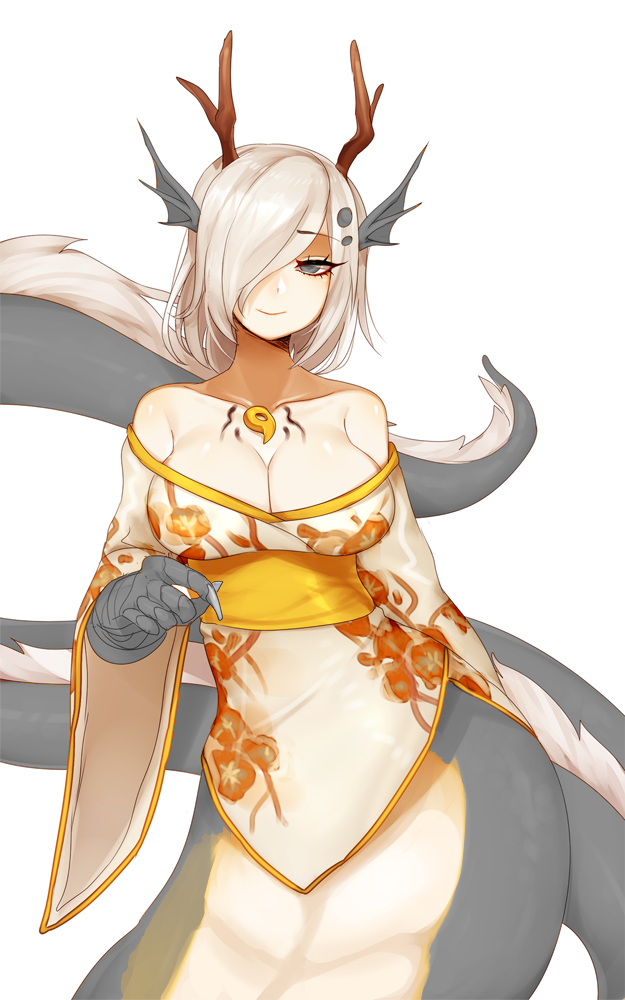 Some Sishka have horns on their heads, and other features reminiscent of dragons.

The alignment of the naga is surprisingly rather predictable, with exception for those of the Hashka, the most numerous of the Naga.

The Dhrijamka are hardly known on an personal basis, but given the nature of their individual rule, they are typically associated with the neutral good alignment, much like their divine ancestor. Some exceptions have been known to occur on the Law-Chaos axis, but there has been no deviation in the Empress' role as a benefactor and protector to date.

The Hashka are more diverse than that of their brethren, and can be found among almost every alignment, just as humans are. Typically, Hashka communities tend to shun troublemakers, but they do not banish or exile them, as they tend to be fairly sensitive to their appearance and relations with other races outside of their own. Instead, those who are evil-aligned or less than gracious often find themselves being escorted to justice or imprisoned by the more responsible members of their own. Should a naga ever commit a crime enough to cause a notable disturbance, there are many good-aligned and neutral-aligned Hashka who will do whatever they can to ensure the perpetrator is disassociated with the majority of their race.

The Sishka tend to be much more relaxed in their alignment, but typically favor good alignments, attempting to stay close to their deity's dogma, owing much in the way of their common nature as clerics and priests. It is highly uncommon, but not unheard of, for a Sishka to devote their spiritual nature toward a deity other than Isis. In these cases, the Sishka will similarly drift toward their chosen deity's alignment.

Almost all naga revere Isis as a creator deity, even if the Dhrijamka are the only known direct descendants of her divine bloodline. Relatively few deviate from her worship, statistically, seemingly almost preferring a lack of religion over any other deity. Members of the Hashka sub-species are the most likely to deviate, given their diverse alignments and a more scattered population throughout the whole of Tirr, as they have more exposure to different cultures and faiths.

As mentioned above, the Naga are a single race with three distinct sub-species. The first of these species, the divine Dhrijamka, will not be covered here, as only one is ever present in the world at a time: