Mystic (3.5e Prestige Class)/Becoming a Mystic of the Chain

Becoming a Mystic of the Chain[edit]

Mystics of the chain see the world as nothing more than a single enormous chain of events. Everything causes something else to happen, and everything is caused by something else, nothing ever happens by pure chance, these are the thoughts of a mystic of the chain. These mystics have the ability to see the reprecussions of actions far more clearly than most other living beings can understand.

All of the following are class features of the mystic of the chain.

Spellcasting: At each level, you gain new spells per day and an increase in caster level (and spells known, if applicable) as if you had also gained a level in a spellcasting class to which you belonged before adding the prestige class level. You do not, however, gain any other benefit a character of that class would have gained. If you had more than one arcane spellcasting class before becoming a mystic of the chain, you must decide to which class to add each level for the purpose of determining spells per day, caster level, and spells known. 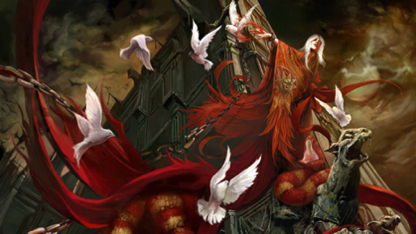 Seth Arren, a Half-Elf Mystic of the Chain.

Instinct (Ex): As the mystic beholds the worlds event happen around him, he starts to notices the patterns in life, and he becomes adept at predicting moments before they happen, gaining a sort of sixth sense about reality. At first level a mystic of the chain may act normally in a surprise round, no matter the circumstances. Additionally the mystic is never caught flat-footed.

Truth (Ex): As the mystic watches the world and sees cause and effect prove itself over and over again, he learns to see when something just doesn't fit, no matter how well concealed it may be. At second level the mystic gains a +2 bonus on saves made against spells of the illusion school and a bonus on all sense motive checks equal to half of his character level.

Chain (Ex): As the mystic lives his life he begins to understand the true workings of cause and effect, and learns to use these workings to craft a chain of spells. At third level the mystic gains the ability to cast a single spell with a casting time of 1 standard action or less as a full-round action and then cast a second spell that same round as a free action as though it was affected by the quicken spell metamagic feat, the second spell uses up a spell slot two levels higher than the spell’s actual level, instead of four levels higher than the spell’s actual level as with the quicken spell metamagic feat. A character who prepare's their spells can prepare a quickened spell this way, having it occupy a slot only two levels higher than normal, but they must still take the necessary actions in order to cast the spell.