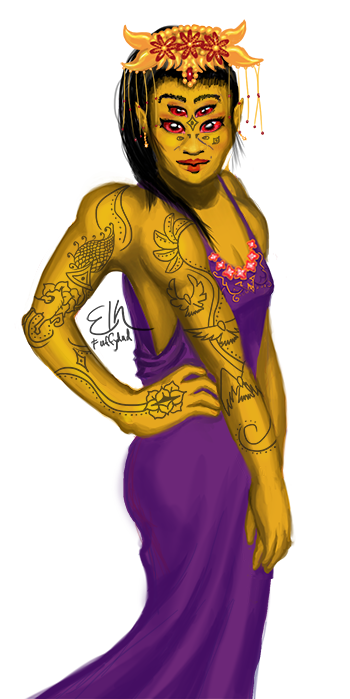 A muqua woman in traditional formalwear.

Muqua are four-armed, four-eyed humanoids. Their eyes have no sclera (whites) and can be any color. Their skin color ranges from blue to red to orange, of any shade and vibrance. They average 6 feet tall and typically weigh 150-200 pounds. They live on fruits, vegetables, and grains, but sometimes hunt or fish. They wear colorful clothing, usually without sleeves to allow maximum mobility of their four arms. Tattoos are commonplace, either as decoration or as symbols of their life story. An adult muqua with no tattoos is considered strange by other muqua.

Most muqua are very spiritual. They meditate on and praise the connection between the earth and the air, and if they follow a deity, it is usually a nature god or goddess. They believe all living things have a soul, all souls are connected.

Muqua have a familial surname and a given forename, like humans.