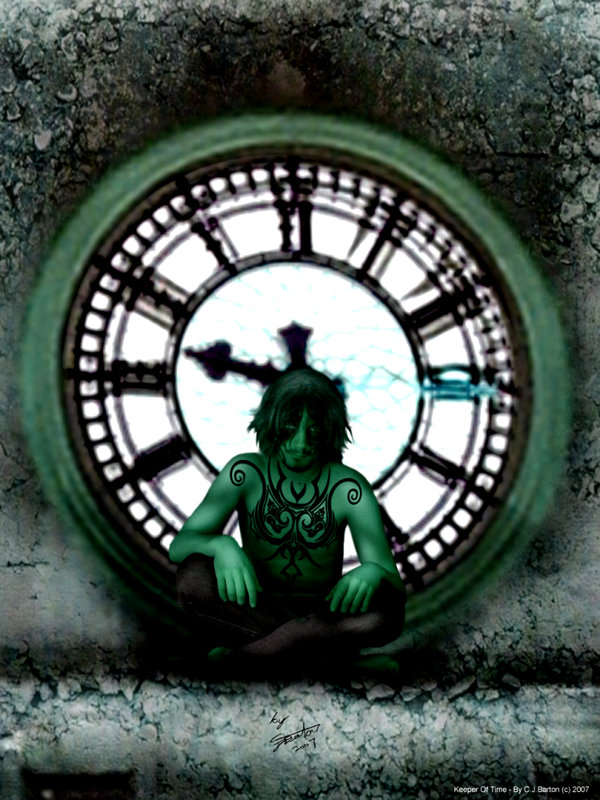 Not all time walkers seek to travel, or even care how far they can jump through time. Indeed, some time walkers seek to exert some manner of control over time. This individuals are dangerous, for they are inherently tied in with time, and so, can actually begin to gain some sort of control over it. These time walkers are known as moment breakers, and they are justly named, for they can seemingly wrench time appart and use the resultant pieces for their own plans.

Moment Breakers are somewhat unsettling individuals who can seem to be inescapable and terrifying upon the battlefield. A clever moment breaker can be anywhere at any given point in time. Moment Breakers are usually drawn towards politics, or other situations in which they might be in charge of another beings life and actions. At the same time, politicians are very drawn towards moment breakers, for they entail a certian kind of control and power that others aren't privelaged with.

All of the following are class features of the moment breaker.

Powers Known: You begin play knowing 1 moment breaker power of your choice. Each time you achieve a new level, you unlock the power of a new power. You can manifest any power that has a power point cost equal to or lower than your manifester level.

The total number of powers you can manifest in a day is limited only by your daily power points.

You simply know your powers; they are ingrained in your mind. You do not need to prepare them (in the way that some spellcasters prepare their spells), though you must get a good night's sleep each day to regain all your spent power points.

The Difficulty Class for saving thows against moment breaker powers is 10 + the power's level + your Wisdom modifier.

Your powers known at each level do not increase automatically after 10th level.

Maximum Power Level Known: This column determines the highest level power you can learn at this level.

To learn or manifest a power, you must have an Wisdom score of at least 10 + the power’s level.

Temporal Strike: A moment breaker has it within his power to actually harm things with the passage of time. This ability functions exactly like the time walker ability of the same name. The distortion bonus increases by +1 every other level (2nd, 4th, 6th, 8th, and 10th). If a moment breaker gets a temporal strike bonus from another source the bonuses on damage stack.

Regress (Ex): By merely doing what they do, a moment breaker becomes aware of the nature of time, and sees that each individual entities place in the timeline is slightly different. When the moment breaker realizes this, he becomes able to, by using his own, fluctuating place in the timeline, perfectly match his place with that of another. At third level a moment breaker gains the ability to take a standard action that provokes an attacks of opportunity, and focus upon one living creature within 100 feet + 10 feet per moment breaker level that he is aware of. After this standard action has been taken, the moment breakers and the creature he focused upons place in the timeline fall in perfect sync with each other, making it so that, should something happen to either individual that affects their timeline, the others timeline is identically affected. This has multiple effects which are listed here:

If a situation arises where an individuals place in the timeline is affected in a way that isn't addressed here, then it is up to the DM to decide the exact result of the effect. A moment breaker may only have his place in the timeline be in sync with a single entity at a given point in time. The moment breaker may not take this standard action if he is currently under the effects of a temporal stasis or time stop spell or a temporal acceleration power.

Time Stretch: A moment breaker can see the passage of time with extraordinary ease, and use it to their favor. This ability functions exactly like the time bender ability of the same name. The insight bonus increases by +1 every four levels (4th, 8th, 12th, etc.). If a moment breaker gets a time stretch bonus from another source the bonuses to AC and manifester level checks made to overcome psi-resistance stack.

Instance Re-Enumeration (Ex): A moment breaker eventually gains such control over time and the way he is in tune with it, that he can even trick time into changing to his slightest whim. At ninth level a moment breaker gains the ability to take a standard action and focus upon one effect that he is aware of, that has a duration, and that he is either being affected by or inside the affected area of, and can attempt a concentration check to extend or decrease the length of the duration of the effect by a number of rounds that he selects (the DC for this check is 10+5 for every round that the moment breaker is attempting to change the effects duration by). This class feature can be used any number of times per day, though a moment breaker can only affect a particular effect with this class feature once in any given 24 hour period. If this class feature reduces the duration of an effect to 0 rounds, then the effects ends at the end of the moment breakers turn.

Combat: Moment breakers are incrediblly versatile upon the battlefield, they could be the nightmare for the wizard, who follows them wherever they go, even if they attempt to escape via time. On the other hand, they could be masters of strengthening their friends, allowing their allies to move faster even in an area that would normally strip them of their speed. The could even be the aggressive psychics upon the battlefield, beating back a persons mind no matter how strong their will is.

Advancement: Moment breakers are often drawn towards any possible avenue that could further their utter control of time and the rest of the world around them. As a result, a moment breaker is often inclined to take levels in thrallherd to dominate those who they could use to further gain control over everything, or possibly metamind for the sheer endless power that they would learn to control. Some moment breakers may seek to also take levels in psion uncarnate so that they may peel away from reality and manipulate time from outside the real.

Resources: While moment breakers don't actually form groups and organizations in and of themselves, they might be able to gain aid from people who respect power or mastery of a certain aspect of reality, for moment breakers can find themselves in both of these roles. A moment breaker would be quick to befriend a reserved time bender or a friendly cleric due to this fact.

Moment Breakers in the World[edit]

Politicians, gang leaders, commanders, these are usually the most common roles for a moment breaker. In result, moment breakers are commonly seen in a place of law, or in a back alley, directing people to do as they wish, though the former tends to be more common. Moment breakers can be found anywhere in time, as long as there is a force to lead, a game to play, or an plan to foil.

NPC Reactions: A persons reaction to a moment breaker is almost entirely dependant on the persons force of personality. For an person with a weak personality might immediately fall in behind a moment breaker, and begin doing whatever they are told. On the other hand, a person who happens to have a very strong personality, is likely to confront a moment breaker when and if they attempt to tell them what to do.

Characters with ranks in gather information can research moment breakers to learn more about them. When a character makes a skill check, read or paraphrase the following, including information from lower DCs.

Moment Breakers in the Game[edit]

Moment breakers are powerful individuals. In a battle, they can twist the world to their every whim and bend even the strong willed warriors to their will. At the same time, a moment breaker in the social world is a snake who can overwhelm even the must devious politicians with their ability to twist words. In truth, moment breakers are manipulative powers in this world.

Adaptation: Moment breakers can be refitted to slide into any campaign without a problem. A moment breaker could very easily be the leader of the rebellion against the king and queen of a small city-state in a campaign that constitutes such a happening. On the other hand, moment breakers could be wild characters, who see anything that cannot be controlled through natural means, as completely uncontrollable, and may view any attempt to do so to be an offense against nature.

Sample Encounter: Orin Maske grew up in a cold world, always shunned out into the freezing darkness of the night, always powerless as he saw atrocities acted upon those closest to him, always wishing death upon the evil people of the world, but never getting his wish. Until that is, the day he turned 13 he realized that he had a strange power, the ability to go back in time at will. The possibilities rushed through his mind, and so he trained himself, learning to stretch his control over time farther and farther away from mere travel, until he found out that he could actually stop time, only for an instant, but he could actually stop it. When he realized this, he decided to make a move, and to being to exact some measure of conrtol over people. He met a few men, big guys, and showed them what he could do to, and conviced them that, to band with him, was to band with a degree of protection. He then told they to go out, and bring in other people who might seek protection, and to tell them of him. He told them to spread his name around as far as they could, he wanted everyone to know the name Orin Maske. In this way he devoloped one of the largest gangs ever seen in a single city, and he sat at its head, pulling a string here, extending his will there. When he felt he had enough power at his disposal, he sent men to the homes of those who had made his childhood so terrible, and had them murder those people, making it sure they were widely pulbisized. He was happy when his plans succeeded, and held a grand party for all of the members of his gang, even inviting people who weren't in it. Today, he still sits in control of that gang, still drawing in new members, still exerting his control when he sees fit.