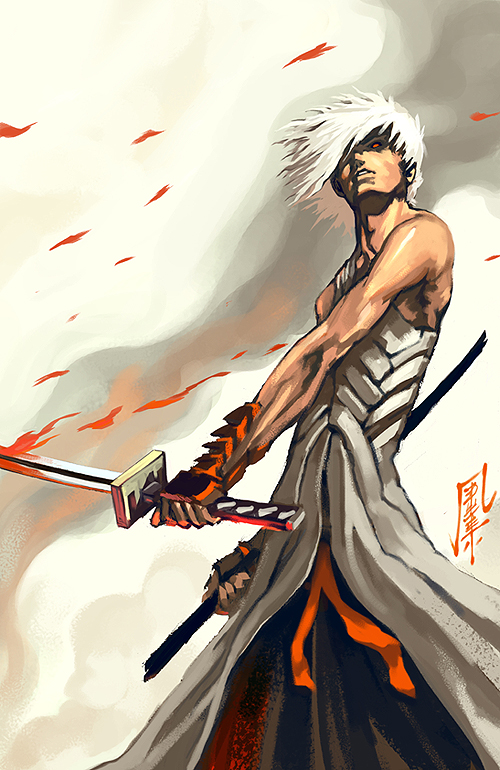 A metahand is someone who tries to master the art of combat in a way that few ever try realize is possible. Instead of focusing themselves on speed or wielding massive weapons, they focus on using the tools they are granted to the best of their physical ability. To the point that they can kill practically anything with even the weakest tool.

A person who would seek to take levels in metahand is someone who wishes to further his ability in melee combat. A metahand is a master of combat, and is rarely ever outstripped in a given battle. They are calculating warriors who can be found at any location upon the battlefield, filling any role that they could possibly fill.

All of the following are class features of the Metahand.

Dice Mastery: A metahand is a man who focuses on dealing as much damage possible, and who learns to do so with unnerving consistancy. Starting at second level, a metahand gains the ability to maximize the roll on a number of d4 a day equal to his Intelligence modifier × his level in metahand. For example, a character with 3 levels in metahand and Int 18 could take maximum damage on up to 12 d4 rolls in a single day. A metahand can only maximize a die roll in this way if the die is being rolled to determine the damage of a melee attack. At each even level after second (4th, 6th, 8th, and 10th), the metahand gains the ability to affect a dice of a single size larger (d6 at 4th level, d8 at 6th level, etc.), though, the total of dice he can maximize in this way remains the same.

Bonus Feats: At 3th level, a metahand gets a bonus combat-oriented feat. The metahand gains an additional bonus feat at every three metahand levels thereafter (6th and 9th). These bonus feats must be drawn from the feats noted as fighter bonus feats. A metahand must still meet all prerequisites for a bonus feat, including ability score and base attack bonus minimums.

Inner Sight (Ex): Metahands are masters of the battlefield, and can almost feel their enemies coming at them. At fifth level, a metahand gains the ability to add 1 point of Intelligence bonus (if any) per metahand class level to his AC in the form of an insight bonus.

Maul (Ex): A metahand is a master of decimating his foes in as little time as he possibly can. At seventh level, a metahand gains the ability to make all damage over all attacks made by him in a single round be considered to be a single attack for purposes of damage reduction, massive damage or any effect dependant on damage per attack.

Checkmate (Ex): A metahands prowess upon the battlefield is rarely ever matched, and it seems at times that a metahand's weapons seek out their target of their own accord, becoming almost impossible to dodge. At tenth level, a metahand gains the ability to automatically confirm any critical threat that he rolls.

The epic Metahand gains a bonus feat (selected from the list of epic metahand feats) at 12th level, and every 3 levels after after 12th level.

Combat: Metahands are truly, very versatile warriors, and can fill many rolls upon the battlefield, from the agressive knight who seeks to decimate his foes quickly and without mercy, to the calm, collected assassin who sweeps in, strikes a blow that few could bare to witness, and drops off again, into the darkness. Metahands are truly, very maleable in a battle, though they almost always reserve themselves for hand to hand, believing it to be the only true way to fight.

Resources: Metahands are a rare breed of warriors. They are usually found on the road, never staying in one place for very long. Though, should a metahand ever actually manage to find another one of his kind, then they will almost always strike up a friendship on the spot, for the ways that a person follows to become a metahand tend to make that metahand begin to think a certain way.

A metahand can be found anywhere in the world that their journeys take them. They are usually drawn towards places that are prone to battle, so that they may test their prowess upon warriors who have fought in battles in the past. Some metahands are calm and steady individuals, who seek to protect their home at all costs, and rarely ever leave for journeys, as other people might.

NPC Reactions: To the average NPC, a metahand will appear similar to any other warrior, given they may seem more intellgent than other warriors, though, this is only gleaned after the NPC has spoken to the metahand for a while. Upon the battlefield, an NPC may see a metahand as an unusual threat, and may not know quite how to approach him in battle.

Characters with ranks in gather information can research metahands to learn more about them. When a character makes a skill check, read or paraphrase the following, including information from lower DCs.

Metahands are masters of combat. They fight, most often, purely for the sake of testing their prowess upon the battlefield. While this is true, there are times when a person will seek out the path of the metahand for the another purpose, whether it be for strength to protect those dear to them, or for the ability to seek revenge upon someone, and actually manage to get it. Truly, metahands have no set place in the world.

Adaptation: While metahands normally lack a preset place in the world, some campaigns may need them to have one, so that the campaign may move along smoothly. For example, in a campaign where everyone in the world is enslaved, and no one, except for the rich, may do as they see fit, a metahand could arise, from a military training camp, where children are taught how to fight and kill. On the other hand, in a world where melee combat is viewed as obsolete and barbaric, a metahand could be one who is in touch with nature, driving back the arcane casters and their false forms of battle.

Sample Encounter: Irayura Tohi was a strange child growing up. He never ran with the herd, instead wandering through the forest of his own volition. He never took to the courting frenzy that gripped some of the other stallions, nor did he seem to care too much for the opposite sex. After a time, he actually left the herd, beginning to wander across the wilderness far beyond his old territory. During this time in his life, he climbed mountains, plunged deep into caves, made friends, and fought many foes. One day, he was exploring the tomb of some long forgotten king, and he found something. There was an altar with a scythe upon it, and the blade of the scythe glowed with white hot energy, never dying out, never even dimming. He lifted this weapon from its resting place, dust falling from it as he did so, and swung it once, twice, three times. For some reason, this beautiful weapon seemed to call out to him, and so he decided to keep it, throwing it onto his back. Then he noticed something, upon the alter that he had taken the weapon from, were words. They looked like instructions of some kind. He stood there for a long time, reading every passage he could find written upon the altar, little did he know, that he was reading the notes of the king who was buried here, the only instructions ever written to becoming a metahand. Soon he left the tomb, his mind heavy with knowledge of unusual ways of fighting, and went on his way. Today he still wanders across the world, though, since he found that altar, he has yet to meet an opponent who can match him in battle.