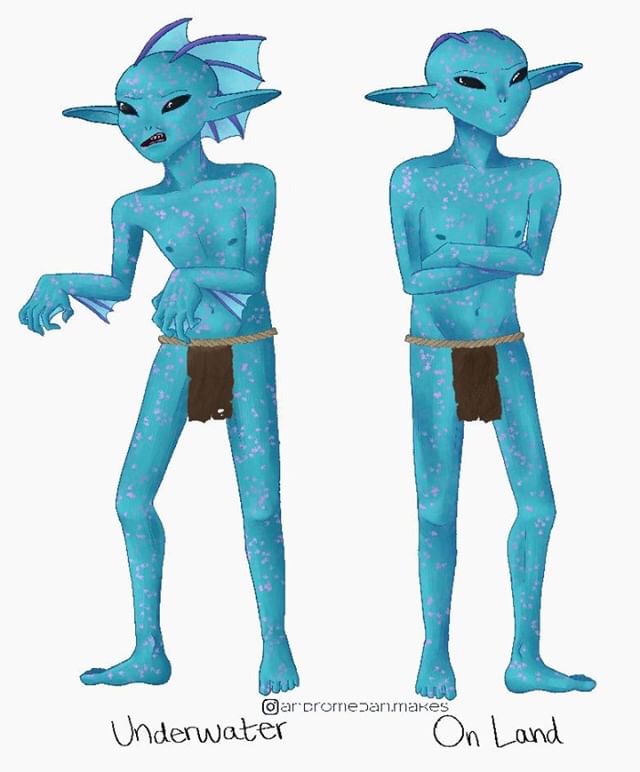 A leather-clad merblin rises from the swamp waters stalking her prey. A ranger dives into a nearby lake to hunt down food for his party. A heavily armored merblin sinks to the bottom of the ocean, deciding it was the fastest way to track their Kraken foe. Merblins are a mixed-race between the beautiful merfolk and the not as beautiful goblins and are excellent aquatic fighters. Dipping in and out of the waters with ease gives them a whole level of mobility to their combat tactics. Though don't mistake a merblin out of water for an easy target, their small slippery scales make them difficult to grab or restrain and the athleticism they acquire naturally makes them tough opponents.

A merblin shares its physical appearance with both goblins and merfolk being a hybrid of the two. Their skin consists of various blue and light purple fish-like scales that make a smooth surface and have different patterns of color. Along the sides of a merblins neck lie gills which allow them to breathe underwater, these gills close while on land and are near invisible when closed. A merblin only has slits for nostrils, these slits close when underwater and are near invisible when closed. A merblin has fins that collapse when above water and fold out when in water, there is one fin on each wrist and two atop the head. Merblins have lean webbed toes and fingers for swimming. They have long ears that end in a point. Merblins have round heads allowing for better hydrodynamics and cannot grow hair anywhere on their body

Merblins are a new species compared to others, their origin is known to be the result of the union between a certain oafish goblin and a merfolk but their history besides that is unknown and or in the process of being written. the reason for the union of a goblin and merfolk is unknown to scholars and is under investigation.

Merblin society is limited to their interactions with their family, merblins rarely get to meet another merblin that it is not related to. Because of the rarity of two random merblins meetings they tend to just mix with other races that they grow up around. being that a pair of goblin and merfolk parents are rarely able to raise the child together, the couple will oftentimes decide between themselves who will raise the child/children, this leads to a merblin often not knowing who their father or mother is depending on who they were raised by.

Merblins are named at birth and share a name using hybrid naming conventions, often using 'a' and 'x' in their names. Females have lighter letters to start of their names, these would be: j's, t's, and r's. males will have harsher letters like g's, d's, and h's.

Aquatic goblinoids of the murky depths.
Ability Score Increase. Your Dexterity score increases by 2, and your Strength score increases by 1.
Age. Merblins mature at the age of 12 and can live for around 80 to 90 years.
Alignment. Most merblins tend towards the nicer sides of alignments.
Size. Merblins tend to be around 4 1/2 feet tall on average.
Speed. Your base walking speed is 30 feet.
Superior Darkvision. You can see in dim light within 120 feet of you as if it were bright light, and in darkness as if it were dim light. You can't discern color in darkness, only shades of gray.
Amphibious. You can breathe air and water.
Webbed. You have a swimming speed equal to your walking speed.
Slippery. Your scales are constantly covered in a thin layer of moisture. Creatures have disadvantage on checks to grapple you and you have advantage on Dexterity checks to escape grapples and non-magical restraints.
Languages. You can speak, read, and write Common, and either Aquan or Goblin.