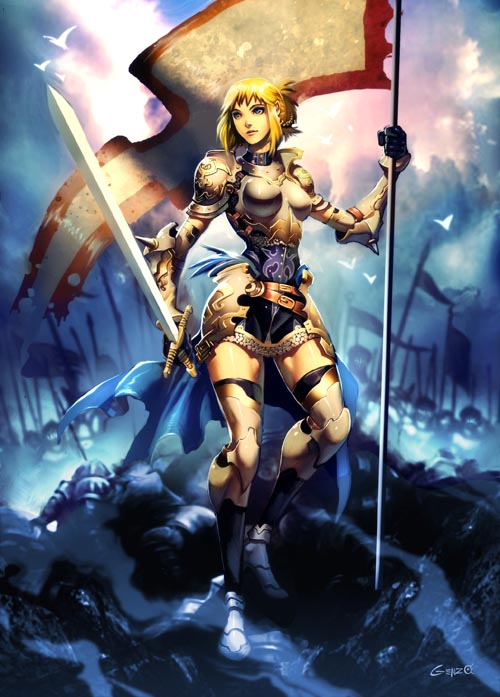 "Stand your ground men, and don't let them take an inch! Follow me, and this day will be ours!"

Most martial characters wade into the thick of battle, crushing their enemies with their weapons or shoot at enemies from afar with ranged weapons of one type or another. The marshal knows the truth of synergy, that the whole is far greater than simply the sum of its parts; together with his group, he allows them to be far more than they could ever be.

Where other characters concentrate completely on their own effectiveness in combat, Marshals know that were they a copy of another character, the combination would still be weaker than the marshal backing up a heavy fighter. Whether it's backing up rogues, fighters, barbarians or rangers, the Marshal promises to boost their strength to incredible heights.

A level or two in Marshal will allow characters to play a battlefield commander, while taking more levels in the class allows you to become a veritable paragon of inspiration to your friends.

Races: With their vast numbers and often ordered society, both dwarves and humans usually become Marshals. However, someone of any race can inspire others to greater heights, and so one can find Marshals in any society that has a cadre of trained warriors.

Alignment: Marshals come in every alignment, though due to their training and ordering of others about they usually tend towards a Lawful alignment.

All of the following are class features of the fighter.

"Don't Die On Me!" (Ex): Marshals know that they're part of a team, and refuse to let a friend die needlessly. As a swift action, a Marshal can stabilize any ally within 10' per class level.

"Stand Your Ground!" (Su): Marshals are aware that the only thing that stands between them and their doom is their comrades, and thus inspire their allies to stay up when others would fall. As a swift action, a Marshal can grant one ally temporary HP equal to the Marshal's character level (not class level) plus one-half his Charisma modifier (minimum 0). At 5th level and every 5 levels after that the Marshal can affect one more ally within range with the use of this ability and the total number of HP granted is multiplied by the same number. These temporary hit points last for one round. This ability costs one Battle Order point to activate for every two allies affected.

Thus, a 15th level Marshal with 10 charisma could effect four allies, granting them 60 (15 x 4) temporary hit points each at the cost of two Battle Order points.

Guided Attack (Ex): A marshal allows his allies to move even swifter than they would normally be able to; as a move action, the Marshal can allow any ally (apart from himself) to make a single attack at their highest attack bonus. This attack gains a morale bonus to attack equal the Marshal's charisma modifier. This ability costs one Battle Order point to activate.

At level 11, Guided Attack improves so that a marshal may allow a character to make a charge instead of a standard attack. This use of the ability costs two Battle Order points to activate.

At level 20, Guided Attack improves further, and rather than a standard attack or a charge, the target may make a full attack. This use of the ability costs three Battle Order points to activate.

Awesome Blow (Su): The Marshal knows that only through a diverse array of conditions will enemies be defeated; specialization is all well and good, but what if the enemy counters that in which you're specialized? Thus, the Marshal allows his allies to inflict an array of conditions upon his enemies. This ability can be used once per round as a free action, and applies to the next attack made by target ally (other than the Marshal himself). This attack gains a morale boost to attack equal to 1/2 the Marshal's charisma modifier and only one condition which has been unlocked can be chosen. Each condition lasts for one round and can be resisted with a Fortitude save whose DC equals 10 + 1/2 class level of the Marshal + the Marshal's charisma modifier. This ability takes effect on the ally's turn, and thus can't be used with abilities like Guided Attack. This ability costs a number of Battle Points to activate as shown on the following chart;

"Shake it off!" (Ex): Combat magics and the like can be debilitating, turning friends to foes and disabling the mightiest warrior. At third level, a Marshal can allow an ally who has just failed a saving throw against an effect to make another saving throw with an additional morale bonus to the save equal to the Marshal's charisma modifier. This ability is an immediate action, and must be used immediately after a saving throw has been rolled, but before the result has been announced. The reroll must be taken even if it is worse than the original. At level 14 this ability upgrades to become a free action, usable twice per round. This ability costs one Battle Order point to activate.

"Feather yon foe!" (Ex): Foes often start from afar, and a marshal knows how important it is to get the first blow in. At 4th level as a swift action the Marshal may rouse his allies from their slowness, allowing each to draw a weapon and make a ranged attack at an enemy with that weapon, or any other they have in hand. The attacks gain a morale bonus to hit equal to the Marshal's charisma modifier. This ability may be used once per encounter.

"Move, move, move!" (Ex): As a purveyor of the battlefield, a Marshal knows best how important positioning is. As a swift or move action but only once per round, the Marshal may allow an allyto move their speed. The first square from which the ally moves is not considered threatened. This ability costs one Battle Order point to activate.

"No Quarter!" (Ex): The marshal begins to come into his own, and sees the fruits of his work come to life. The feats of other commanders appear paltry before his abilities as he gains in experience and knowledge. At 6th level as a standard action, a Marshal adds 1d6 damage for every two class levels he posseses to the damage an ally deals within their next round. Thus when he gains this ability he can grant an ally +3d6 damage. At 8th level this increases to +4d6, at 10th level to +5d6, and so on. Every six levels after this ability is gained (12, 18, and so on) the Marshal may target another ally with each use (two allies at 12th level, three allies at 18th level). This damage can only be applied against a single opponent, and only once for every iterative attack the ally could make (two times with BAB +6, three attacks with BAB +11, and so forth). This ability costs one Battle Order point to activate for each ally affected.

"Watch Yourself!" (Ex): As he gains in his ability to see through the flows and ebbs of the battlefield, the Marshal can begin to foresee where his allies will make a mistake and head them off, warning them from it before they do. As a move or swift action, the next time target allytakes an action which would provoke an attack of opportunity, the action does not provoke an attack of opportunity. This ability is usable once per round, and lasts for one round. This ability costs one Battle Order point to activate.

"Never Surrender!" (Su): At 16th level the Marshal can pull characters from the brink of death with a few memorable words and a dramatic wave of his hand. This ability upgrades "Never Give Up!", healing allies by 50% of their maximum HP. Apart from this, it follows all the same rules as "Never Give Up!". This ability costs three Battle Order points to activate.

"CHARGE!" (Ex): As the Marshal reaches the pinnacle of his abilities, he gains the ability to motivate all of his allies together in a single charge of glorious power. Once per encounter as a full-round action, the Marshal allows himself and each ally within 60' to make a charge action against a foe. (This range overrides the usual one for Battle Order abilities.) Each charge deals an extra 50 damage, gains a morale bonus to attack equal to the Marshal's charisma modifier (minimum 0), and if a foe is hit by more than one creature that foe is Stunned for one round. Creatures charging due to this action do not get in each others' way while charging. This ability costs five Battle Order point to activate.

Religion: Both Heironeous and Kord are often worshipped by Marshals for their combative side, while other more neutral-minded Marshals worship St. Cuthbert. Evil Marshals can be found worshipping Hextor if they are lawfully aligned, while those who simply revel in the slaughter may revere Erythnul.

Other Classes: Most martial classes get along fine with the Marshal, and appreciate the Marshal's ability to boost their strikes while helping them to continue standing despite the attacks arrayed against them. Some casters feel disdain for Marshals though, especially those who believe in using nonlethal methods to destroy their opponents, or those who prefer to kill without dealing any damage (such as through Phantasmal Killer).

Combat: The role of Marshals is clear, and they do it well; to help their allies surpass their own limitations. They excel in this role, and can easily substitute the Cleric or Healer classes for in-combat healing and keeping their comrades up and fighting.

Advancement: The Marshal class makes for a good dip for any character who wants to be a leader, their "Stand Your Ground!" ability scaling well with levels even if the character takes only a level or two in Marshal. That said, the Marshal has no real break point, every level giving them something new and cool to do, or boosting an existing ability.

Daily Life: Many Marshals find themselves thrust into the role of leaders or mediators where they use their skills to convince others to act one way or another. Their knowledge of tactics also sometimes places them in the role of an advisor, where they give sound advice on how to act in the coming battles ahead.

NPC Reactions: Marshals, with their charismatic ways and knowledge of interaction are often welcomed by most people. However, there are some people who see them as a force which fuels the war machine, and amongst pacifists they are often shunned if they display their true abilities.

Characters with ranks in Knowledge (Local) can research Marshals to learn more about them. When a character makes a skill check, read or paraphrase the following, including information from lower DCs.

Marshals in the Game[edit]

Marshals can benefit almost any party that contains people who do damage, boosting their abilities while keeping allies standing and moving about tactically. They are often found in the company of military squads, allowing squadmates to attack faster, do more damage, and be more effective, or as leaders in rebellions, filling much the same purpose.

Adaptation: While the standard flavor is that of an inspiring leader, the class can easily be played in a domineering, almost sadistic role where the Marshal (perhaps "Mistress" instead?) calls their allies "slaves" or "peons", making scorching remarks to get them to fight past their own abilities rather than using inspiring words.