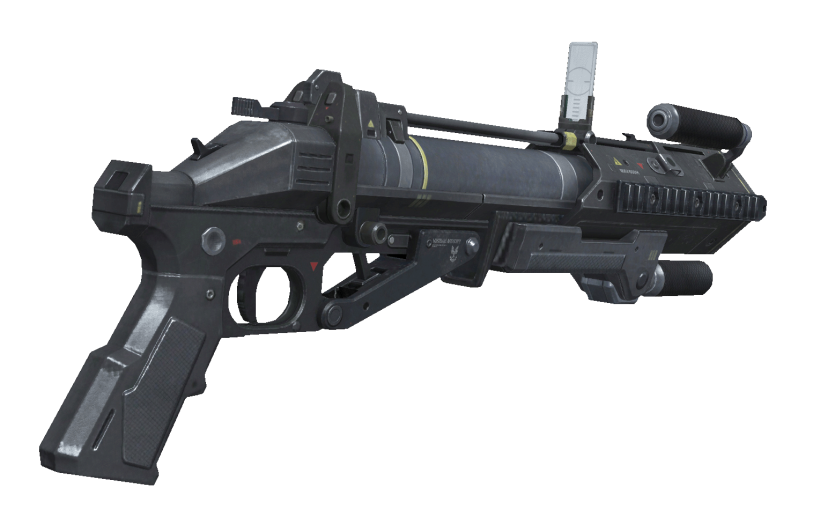 PL 7 UNSC, Misriah Armory
40mm high-explosive dual-purpose grenades
Due to its simplicity, ruggedness, and firepower, it has been a mainstay weapon in the UNSC Army.
Longarm (Personal Firearms Proficiency)

The M319 IGL fires high-explosive dual-purpose grenades. The grenade launcher takes a full-round action to reload and has two firing modes. The first launches a single grenade that explodes on impact dealing damage in a 10 ft radius (DC 18 Reflex for half). The second firing mode shoots a grenade that explodes when the user wishes. This is performed by holding down the trigger, which fires the grenade but merely primes it, leaving the detonation contents inert; the grenade will only explode after the trigger is released. This enables the user to lay a trap if the grenade is bounced properly into position. Detonating the grenade before it comes to a slow or stop is very difficult and requires a DC 15 dex check (1d20+dex mod) to detonate at the preferred time. This DC increases by 5 for every 10 ft beyond the first range increment. If the dex check fails, it detonates prematurely.

Upon exploding, the grenade also emits an EMP effect within the first 5 ft of the explosion. Any target hit by it has their shields (if any) reduced to 0 until the end of the round. The shields are reduced before the damage is dealt from the grenade; therefore shields offer no protection from the explosion. The EMP burst does no additional damage to non-shielded targets and is negated if the target succeeded on the reflex save for half damage. This effect only activates if the grenade was manually exploded by the user.

The grenade launcher has built in safety features. If a grenade is fired within 30 ft, it will bounce freely in the direction it was fired and if it does not exceed 30 ft by the time it lands, it does not arm and will not explode. Additionally, if the grenade is picked up or tampered with while the detonation contents are inert, it will automatically disable itself from exploding.

Unless noted here, attacking with this weapon is identical to throwing an explosive: you make a ranged attack against a specific 5-foot square (instead of targeting a person or creature) and also shares the same range increment negatives as thrown explosives (detailed on p.148 of D20 Modern Core Rulebook).