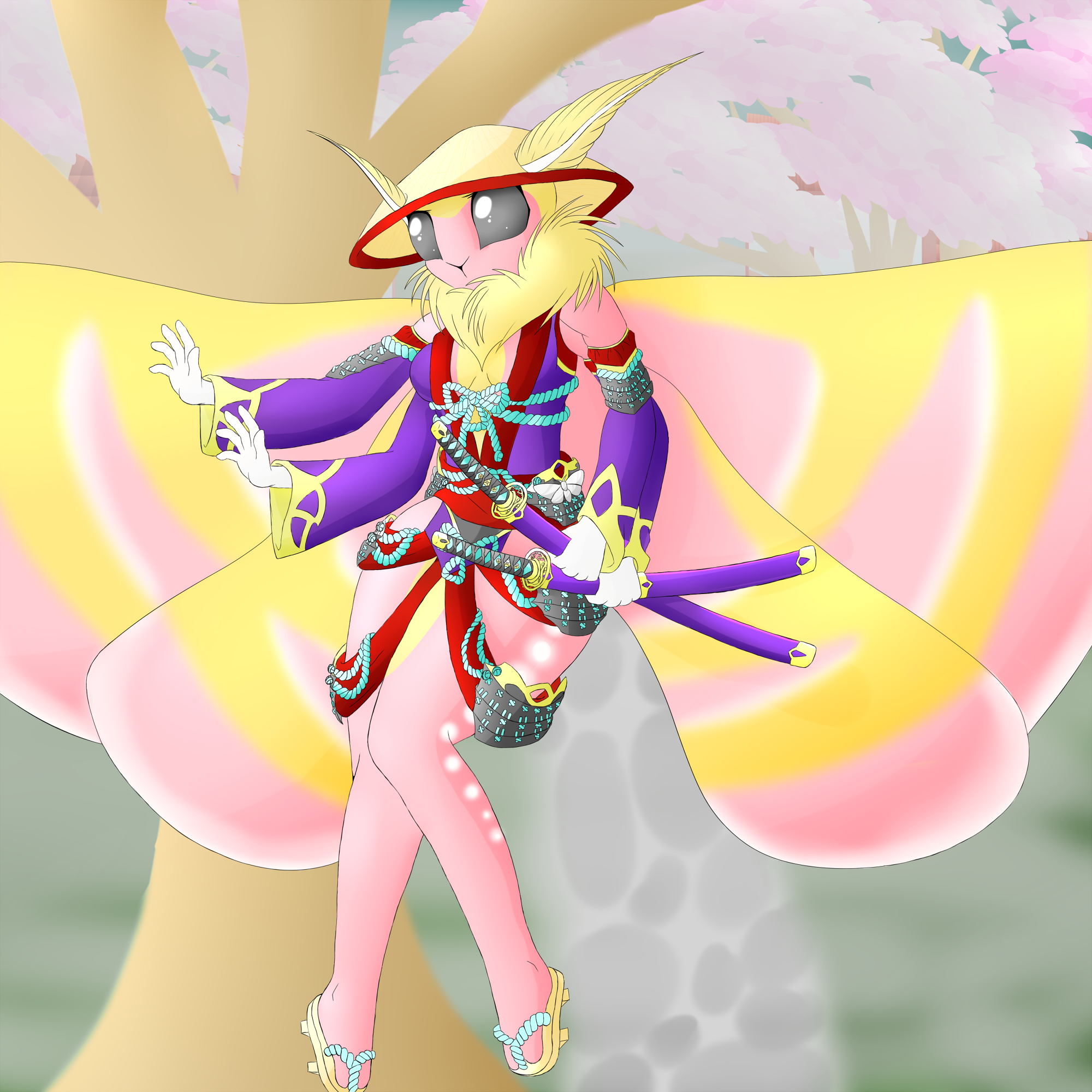 The Lunoth are a simple, peaceful race of moth-like people originating from the far east. they are shy and reclusive when it comes to people especially other races, but when it comes to dealing with nature they excel. Master crafters and the best textiles in the land made from their own incredibly strong and soft silk that they trade with others.

The Lunoth are a shy and reclusive race tending to stick to their own small villages and avoiding almost all contact with other races. They are smart and hard-working, practicing even the most mundane skills to levels of perfection. Lunoth have a kind and very trustworthy nature finding them favorable companions among other races. The Lunoth themselves, however, will tend to find it difficult to open up to others and earning one's trust and friendship is a rare and admirable feat.

Lunoth are shorter than most standing 5 foot 6 at max, they are impressively light weighing only an average of 30 to 60 lbs. They possess four arms and two thick legs, as well as two pairs of soft dust-covered wings that carry them everywhere in a bizarre fluttering flight path. Lunoth have a small egg-shaped head with two large solid black eyes great for seeing in the dark and two large fuzzy antennae sprouting from their lashes used for sensing their environment and communication. their necks and upper backs are covered in a thick fluff. The Lunoth can vary in almost every color or pattern imaginable with brown, grey, black and white being common, and blues, pinks, greens, and purples being a bit rare. Eye patterns are the most common thing to find on their wings but stripes leopard spots and even skulls and other sentient designs are quite possible. 3ft 5ft average height 30lb - 60lb average weight.

The Lunoth don't typically practice combat so warriors are few, typically Lunoth will practice the druidic arts or specialize in magic, though some practice a form ritualistic sparring. Lunoth who are pushed far enough, however, are not shy from taking up weapons, fighters, barbarians, and paladins being more common and bestial samurai in extreme cases.

The Lunoth are a kind and agreeable race. what little ties they have with others are known for how well they treat their friends. Quiet as they are a lunoth will fiercely voice their opinion if they believe they are being led into doing something they believe to be wrong. The Lunoth are very accepting never judging by race. a truly good person will always find themselves in a Lunoth's favor

Lunoth tend to stay more neutral rather than lawful or chaotic (though they can stray that way). Their high moral standard will usually lead them to either good or neutral, never evil.

The lunoth make their home between the thick jungled mountains in the far east. their villages hang from massive paper lanterns floating hundreds of feet above the ground but still below the peak of any mountain. their homes are beautiful, clean and well kept, exposed wooden beams paper doors and a very eastern feel are seen throughout their cities.

Lunoth follow no religions en mass. Instead, most tend to worship, care for and assist the surrounding nature. Though not a steadfast rule, however, some Lunoth find themselves very happy in a number of religions though never straying toward anything evil or occult.

All Lunoth can speak common and natural as well as Lunethian, a native language to them not using any words, so much as a combination of body language, the position of their antennae and a soft humming noise made from vibrating their wings. note: two Lunoth who are very close to each other will often have their antennae touching when speaking to each other in their native tongue, for an even closer understanding of one another.

To the Lunoth names and the meaning behind them are very important. So much so that children are only given a surname from their parents at birth as their real names are chosen by themselves upon reaching puberty. Their first and last names always start with the same letter.

List may be expanded on and is only limited by the creativity of the player and the limitations of the DM.