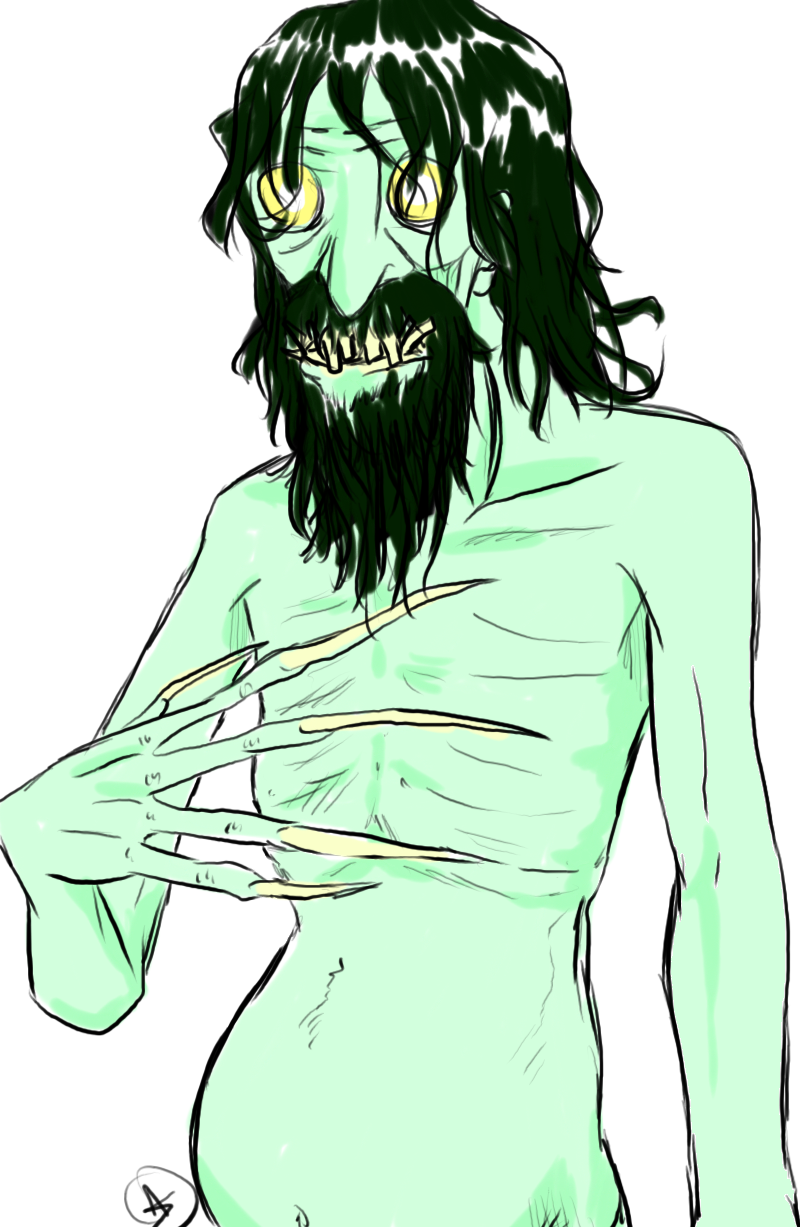 Lostfolk are humanoids that look extremely sickly or haggard and emaciated. Their skin is a pale greenish grey color, like that of a drowned corpse. They often grow hair only on their head or pubic areas and the hair is dark colored. Their hands have claws and very long fingers. Their feet have long metatarsals, giving them a long foot. On their torso, their ribs will always show and their limbs are long, skinny and bony. They are far from full-on skinny, however, having pot-bellies due to their diet of mainly meat. Clothes are rare on them. Their faces have sunken cheeks, wrinkled brows and huge eyes like orbs that glow. They have teeth that resemble jagged glass for ripping flesh apart.

The lostfolk had their entire civilization dragged from their own realm by a mad wizard by the name of Huymu (hoi-moo), who then enslaved them for ten thousand years. An insipid adventurer eventually slew him, thus releasing the lostfolk. It is believed they ate their savior after he let them out unknowingly. Freed from their bondage, they scattered like marbles dropped on the floor. They have little, if any, recollection of their home realm. Here now, they roam about in search of food like animals, hunting humans and whatever else falls their way. It is believed that, in their original home, they were considered lesser natural predators. Some are said to have spread as far as the levels of the Underdark while others occupy the forests of icicles near the frigid mountains.

Lost folk display behavior similar to animals. Some have actually learned how to speak, but others remain relatively incomprehensible. They live in packs, usually occupying caverns of bears or other beasts which they killed and took over. they are known to be nocturnal, only coming out at night to hunt. Many a traveler has fallen to their sneak attacks. Lostfolk frequent forests where they may hide in the bushes and leap out to kill in quiet or surprise. While they are certainly feral in behavior, they are said to be far from being total animals. They are often highly selective of their food, favoring humanoids or elves. They can communicate simple ideas through gestures. Some have reported lostfolk being able to make fire, though not to cook with. Disturbingly, they are known also to put on the clothes of those they have eaten and wear them.

The most human lostfolk have been seen acting is highly speculated and disturbing. After a big successful hunt, they usually retreat to their cave with the spoils of corpses. Before eating, they rip the heads off the bodies and dissect it, effectively removing its intestines and organs. Using these grisly parts, they erect maybe three to five totems built of these bloody parts and a stake of wood. These totems are often as tall as an actual human. a fire is built before the totems, casting eerie flickering shadows. The lostfolk then seem to prostrate themselves before these idols, smearing themselves in blood. After, they will go onto a merry frenzy of feasting on the raw flesh. It is said the lostfolk worship some horrific deity from their home realm, which they have now bought with them.

Lostfolk have names that have special meaning to them, and to their relatives. It is possibly meaning from their home realm.

The race called the lostfolk eat the flesh of their kills, whoever that may be.
Ability Score Increase. Your Strength score increases by 2, and your Wisdom score increases by 1.
Age. They are considered a teen at age 25, an adult at age 100, and can easily live to be 600.
Alignment. Lostfolk seem tame and quiet but are really chaotic.
Size. Lost men tend to be as tall and as heavy as humans. Your size is Medium.
Speed. Your base walking speed is 30 feet.
Darkvision. You can see in dim light within 60 feet of you as if it were bright light, and in darkness as if it were dim light. You can't discern color in darkness, only shades of gray.
Carnivorous. You may spend 10 minutes eating the raw flesh of a creature that was slain no longer than 1 hour ago. If you do so, you gain temporary hit points equal to your level which last until depleted or you complete a long rest. In addition, your food requirement for the day is fulfilled and the creature must be a Medium humanoid.
Death Trace. You can detect the slightest trace or scent of blood. You have advantage on Wisdom (Survival) and (Perception) checks to track creatures that had less than their hit point maximum in hit points.
Claws. Your claws are natural weapons, which you can use to make unarmed strikes. If you hit with them, you deal slashing damage equal to 1d4 + your Strength modifier, instead of the bludgeoning damage normal for an unarmed strike.
Languages. You can speak in broken Common (e.g., "whoooooo.... are youuuu") and make gestures to communicate simple ideas.