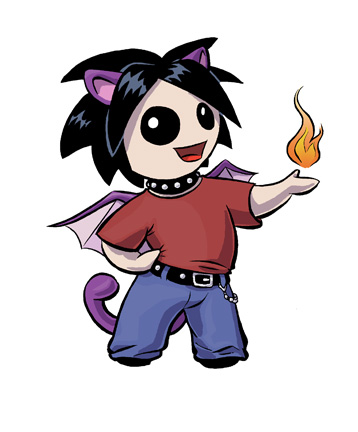 Lord Eiji brings you CANDY! Except instead of candy, it's FIRE!

In the world of Eijilund where the Plushie race was born, they are ruled by a God-King, Lord Eiji their deity and creator. The deity takes a very active role in the world there via his Aspect in the material plane, although given the deity's madness it ranges from barely noticeable from world shattering.

Lord Eiji appears as an Eijilundian Plushie of unusual size, 3 feet tall. He has a pair of cat ears and tail, and bat wings which if asked he'll claim to have 'stolen from someone who wasn't using them'. He has the traditional spiky black hair and eternal smile of the more generic of his kind. In his true form however, he takes the form of a bright blue star. As a glowing ball of fire he could never land on the surface of his world without damaging it, so his only common appearance is that of the noble doll.

Lord Eiji is a crazed god, no more sensible then the Eijilundian Plushies he created. While they make perfect sense out of each other, others find the King cryptic at best and daft at worst. He asks not much from his followers, except an insistence on occasional randomness, a fun-loving spirit, and a love of all that is sweet. The king has a sweet tooth and he is well in his right to make it a law.

Eijilund is full of temples to the God-King, but outside his realm he is mostly unheard of, except by the unusual plushie who may appear in that world, or by a problem with divinations. It is said when you get a bizarre answer from a divination it is the work of Lord Eiji answering the spiritual phone. There have also been reports of spotting plushies or aspects of Lord Eiji in the Far Realm, leading to speculation on his origins. Perhaps he manages to navigate that terrible place as a means of crossing between worlds.

The God of Plushies is an active god, and sometimes interferes with the material plane in very strange ways. His loyal followers may be blessed with a rain of gumballs, for example. What can you do with a gumball? We don't know, but at least it didn't rain cats and dogs like last time. Boy, was that ever a bloody mess.