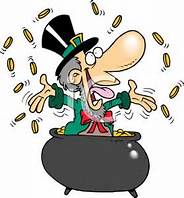 In a world of monsters, heroes, gods, and kings, money is the true power. Money is what buys armies, magic items, potions, and lives (it also allows stupidly rich guys like Bruce Wayne and Tony Stark to be superheroes). " Today (May 12, 2015) gold is selling for $1190 per ounce. 12 Troy Ounces to a pound would yield about $14,280 for a pound of Gold. Using the standard D&D weight of 50GP to a pound, we find that each GP would be worth about $285, assuming that the gold is commodity quality." Keeping this in mind, the average starting gold of 100 GP is about 28,500 USD or 20716.73 British Pounds, that is a lot of cheddar to spend on stuff, but this is still not enough (some would say one can never have enough money but... moving right along!). With just a measly 100 GP you can just barely afford a decent weapon and some good armor should you be proficient in it. What if I told you, there is a way to have an absolute $H!T ton of gold pieces at first level?

Ultimate Feats (d20 supplement, this build doesn't work without it, however, d20 and 3rd edition are compatible and designed to do so. It is, in the end, up to the DM to allow this), Dungeon Master's Guide I and II, Dragon Magazine #315 (optional), Rokugan Campaign Setting (Optional), and Greyhawk Regional Feats (the PDFs for these can be found on Google, but make sure the link has the superscript PDF, otherwise it could be a potentially malicious one).

Starting Ability Scores (Before Racial Adjustments): The path you choose to continue is entirely yours. If you intend to continue down the path of thievery and murder, dexterity will be of utmost importance, if you want to continue as a tank, strength and constitution will be great to have, intelligence or charisma will be important if you chose to continue as a spell caster, etc. Personally, I like to continue with thief-ish things, it's highly profitable when (and / or if) you become a crime boss.

Race (Templates): Technically any race can be used in this build, however, human works the best as you can accomplish it without the need for two flaws (even so, the extra feat from taking two flaws is useful).

Landless Nobility forces max starting gold, which as an Aristocrat brings you up to a whopping 480 GP. Silver Spoon doubles this to 960 GP. Apprentice criminal adds 100 GP more, and Mercantile Background adds 300 GP (not to mention the ability to sell for 75% listed price instead of 50%, and once per month you may buy an item for 75% listed price). This brings your starting gold up to 1,460 GP, a truly phenomenal amount for 1st level. (Again, the Wealthy Family homebrew trait can be very useful as well, increasing your starting gold to 900 gp).

Landless Nobility also grants you +4 on charisma based checks made against residents from your homeland, and Apprentice-Criminal also doesn't require the 100 GP tithe, and grants +2 on intimidate checks (not to mention the other duties and benefits of being an apprentice). As an apprentice, you are required to comply with the demands of the mentor (DM's discretion).

Should you travel the path of the righteous man, you can give away your incredible wealth to those who need it, and go on quests to get more money to give to those in need. For those who don't go straight, hoard as much money as possible and take levels in rogue or similarly criminal classes that allow you to gain money more convenient ways ;) Spell casters with this immense starting wealth can afford armor that protects them better with less spell casting restriction, as well as magic items galore. The same goes for whatever path you take, especially first level, buy useful things- Potions of Healing, Potions of Invisibility, Etc.

This build works on the principles of: 1- your DM allowing d20 supplements (or any supplements at all) in a 3.5e campaign, and 2- Money. Ever wanted a horse at first level? Now you can buy a herd of Horses! Ever wanted to have magic armor (albeit pretty crappy armor) at first level? NOW YOU CAN! This makes the equipment buying process much... harder, because now you have so much you can afford that the book doesn't choose for you. Because you can start with 1,460 GP, after a couple lootings and pillages, you can afford a +1 magic item. Remember, Mercantile Background allows you to purchase an item for 25% cheaper than normal once per month. A +1 magic enchantment for a weapon costs 2000 GP, 25% less means it now costs 1500 GP. You already have 1460, snatch a weapon and some gold from a corpse and you can have a magic weapon at first level! (You'll also be broke, everything has a downside). Of course, if you multi-class into the Samurai detailed in Rokugan, you essentially get a free magic weapon, really the only reason you spend your money like this is because you intend to multi-class into something other than Samurai.

No matter what track you chose to follow, diplomacy and social feats/ skills/ abilities help to acquire more money. On the other hand, killing things really quickly also helps a lot. So either go balls deep into the realm of role playing, or follow up with a high damage and/ or "tanky" class. Mercantile background is useful for selling and buying things as well. A great multi-classing option is the version of Samurai found in the Rokugan Campaign Setting (however, with it's benefits, it has it's pitfalls). This Samurai version receives a free Katana (Mwk B@st@rd Sword) and Wakazashi (Mwk Short Sword), which can be turned into magic weapons at the cost of a few XP. However, you will have to follow the rules and restrictions of the Samurai, which are similar to those of a paladin.

really, the only immediate limitation is the price tag as the "good" magic items are too expensive. However, if you multi-class as something other than a human without actively increasing your aristocrat level (which is not worth it what-so-ever) , you receive multi-classing penalties. And if you multi-class into Samurai for the free magic weapons, you must follow the Samurai rules.

Money is powerful, however, the price is money's only natural predator, and the buyer is his own enemy. The player who has a potential 1460 GP will likely burn through their money very quickly, tempted by all of the possible buying options. Regardless of whether or not they do, remember, they are an apprentice. You can use this control their actions quite a bit. And if they choose to multi-class into Samurai, you can ensure they follow the rules ;)