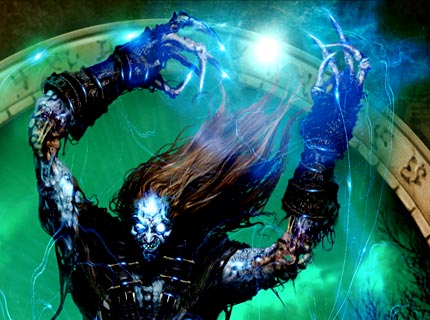 A spellcaster that has used powerful necromancy to prolong their life.

A lich's appearance depends on how decomposed the mages body is as a lich's body still rots as normal without the necessary magic. But if the eyes, or limbs rot away corporeal energy will form and act as those body parts.

Here is a sample Lich using a fifteenth level Wizard Karmainian as the base creature.

"Lich" is an acquired template that can be added to any Dragon, Giant, Humanoid, or Monstrous Humanoid creature (refered to hereafter as the base creature provided it can create the required phylactery; see The Lich's Phylactery below.

A Lich has all the base creature's statistics and special abilities except as noted here.

The creature’s type changes to undead and gains the Dark Mind subtype. Do not recalculate base attack bonus, saves, or skill points. Size is unchanged.

Increase all current and future Hit Dice to d12s.

A lich has a +5 deflection bonus to Armor Class, or the base creature’s deflect armor bonus, whichever is better.

A lich fighting without weapons uses either its touch attack (see above) or its natural weapons (if it has any). If armed with a weapon, it usually uses the weapon as its primary attack along with a touch as a natural secondary attack, provided it has a way to make that attack (either a free hand or a natural weapon that it can use as a secondary attack).

A lich retains all the base creature’s special attacks and gains those described below. Save DCs are equal to 10 + 1/2 lich’s HD + lich’s Cha modifier unless otherwise noted.

Fear Aura (Su): Liches are shrouded in a dreadful aura of death. Living Creatures of less than 5 HD in a 60-foot radius that look at the lich must succeed on a Will save or be affected as though by a fear spell from a sorcerer of the lich’s level. A creature that successfully saves cannot be affected again by the same lich’s aura for 24 hours. This aura can be suppressed at will as a free action and resumed as a free action.

Paralyzing Touch (Su): Any living creature a lich hits with its touch attack must succeed on a Fortitude save or be permanently paralyzed. Remove paralysis or any spell that can remove a curse can free the victim (see the bestow curse spell description).

The effect cannot be dispelled. Anyone paralyzed by a lich seems dead, though a DC 20 Spot check or a DC 15 Heal check reveals that the victim is still alive.

A lich retains all the base creature’s special qualities and gains those described below.

Damage Reduction (Su): A lich’s undead body is tough, giving the creature damage reduction 15/bludgeoning and magic. Its natural weapons are treated as magic weapons for the purpose of overcoming damage reduction.

Immunities (Ex): Liches have immunity to cold, electricity, polymorph (though they can use polymorph effects on themselves), Fear and Moral effects.

Undying Mind (Su): A lich's mind and magical power is what holds it together. As such a Lich can use their spellcasting ability to their determine their health as if it was their constitution.

Increase from the base creature as follows: Int +2, Wis +2, Cha +2. A Lich has no Consitution score.

Liches have a +8 racial bonus on Hide, Listen, Move Silently, Search, Sense Motive, and Spot checks. Otherwise same as the base creature.

Same as the base creature + 2.

Same as the base creature

To become a Lich the base creature must go through a ritual on a night with all four moon's full. This ritual takes 3618 rounds (or one hour and eighteen minutes). In the ritual you draw a pentagram out of our own blood and cast the necessary spells. Then you must choke on the blood of an innocent of the same race as you. As soon as you die you will be reanimated as a lich.

During the ritual you must cast the following spells:

An integral part of becoming a lich is creating a magic phylactery in which the character stores its life force. As a rule, the only way to get rid of a lich for sure is to destroy its phylactery. Unless its phylactery is located and destroyed, a lich reappears 1d10 days after its apparent death.

Each lich must make its own phylactery, to make your phylactery you must pick up the object during the ritual and throw up the blood (from your lungs) onto the object. Your soul will then be bound the object.

The most common form of phylactery is a sealed metal box containing strips of parchment on which magical phrases have been transcribed. The box is Tiny and has 40 hit points, hardness 20, and a break DC of 40.

Other forms of phylacteries can exist, such as rings, amulets, or similar items.

During the ritual to become a Lich you can cast certain spells to add certain effects. Each time you cast a spell add its casting time to the time required to complete the ritual.

During the ritual cast Awaken Undead (From Libris Mortis) on yourself. Now when you transform into a Lich you gain the ability to cast Awaken Undead as a spell-like ability on a single mindless undead of your choice, once every three months. This specific undead will be completely loyal to you indefinitly.

During the ritual cast Gentle Repose on yourself. Now when you become a lich your body will appear living and you will appear to have a metabolism. Your body should stay in the same condition it was alive. Your eyes will remain moist, your blood will keep pumping, and will not appear dead. To keep the magic strong enough you must have Gentle Repose cast on you at least once a month. If you fail to have this cast once per month the spell will only work for one week and then stop.

During the ritual cast Magic Jar on yourself. Now after you create your Phylactery, anyone who wears the Phylactery for a month also becomes the Phylactery. As such if the lich dies the lich can decide to put its soul in the body of the host. The lich has no control over the body but can communicate telepathically with the host.

During the ritual cast Touch of Years (From Complete Mage) on yourself. Now when you use your touch attack it also deals 1 constition damage in addition to normal damage.

During the ritual cast Wither (From Sandstorm) on yourself. Now when you use your touch attack you can choose for it deal an extra 2d6 of dessication damage.