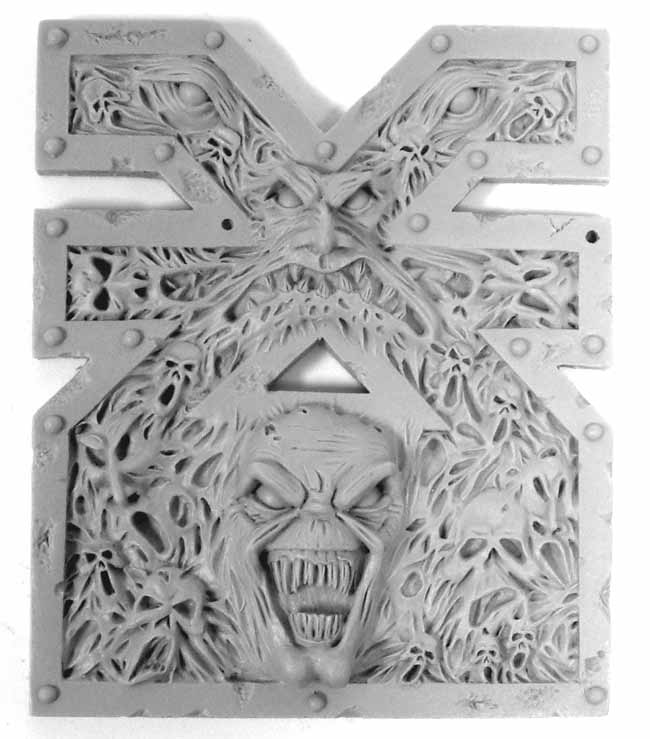 "Blood for the Blood God! Skulls for the Skull Throne!"

Khorne is one of the four major Chaos gods (the other three being Nurgle, Slaanesh, and Tzeentch). Like his brother gods, Khorne grew from a single survivalist emotion: in his case, the emotion was rage. Khorne is the Chaos god of hate, war, violence and killing; for this reason he bears sobriquets such as "Blood God" and "Lord of Skulls". He is depicted as an extremely well-muscled, hundreds of feet tall beast-headed monster sitting on a brass throne atop a mountain of skulls in the middle of a sea of blood. The skulls are described as belonging to both his victims and his worshippers alike, as Khorne cares not from whence the blood flows, as long as it flows. Due to the immense amount of violence and killing occurring throughout the universe, Khorne is the strongest of the Chaos gods. The colours associated with him are red, brass and black, and these colours feature prominently in his demonic hordes and are usually adopted by his followers. The correct adjective to indicate individuals and events related to this God is "Khornate".

Khorne is a god of martial pride, honour, and a warrior's love for battle. He has an insatiable appetite for slaughter and death. Khorne's followers share their god's straightforward philosophy on warfare, preferring to charge directly at their foes in order to defeat them in close combat. As such, Khorne's followers are generally berserkers that pay little heed to tactics or defense in their frenzy for blood. Khorne frowns upon the use of sorcery and trickery, and those pursuing the magical arts look elsewhere to find a patron for their studies.

Khorne's followers are stated as never building temples in his honour. Instead, they worship their god on the battlefield, praising him with battlecries along the lines of "Blood for the Blood God! Skulls for the Skull Throne!". Each death on the battlefield, regardless of whether it was the death of an enemy or a worshiper, is considered a sacrifice to Khorne. Followers do occasionally build simple monuments at the sites of particularly bloody battles, consisting of a single large pillar surrounded by a pool of blood. These structures are the closest thing the Khornate religion has to a "temple". His followers also offer him praise and attempt to win his favor by savagely attacking each other when there are no other battles to be fought -- and some times even when there are.

Khorne's followers have little in the way of an organized clergy. He is worshiped not by one organized religion, but by hundreds of small cults, each with their own unique practices. Even within individual cults, a hierarchical clergy is rarely seen. A cleric of Khorne is simply a battlefield commander who leads attacks against cities and towns for no other reason than for the sheer sake of killing. It is said that Khorne is the easiest god to worship, because while worship of most of the other gods requires rituals, altars, and sacrifices, Khorne's demands are simply that his followers spill fresh blood and collect skulls in his name.