The Kaimen are a rather brutish looking race of tall, powerfully built humanoids that resemble various reptilians, but most notably iguanidae. They regularly stand high above the average human and typically outweigh them by quite a bit too. The body of an average Kaiman is covered with a thick, scaly hide, but the scales tend to be thickest around the base of the neck. The color of their scales are most commonly seen in varying shades of greens and browns, but there are more unusual colors seen as well, such as blacks, yellows, and reds, just far more rarely. Many Kaimen also have spikes adorning the backs and tops of their heads and necks, giving them a somewhat imposing appearance when combined with their already powerful frames. They lack the tails most reptilians are seen with and have unusually human hands, but they are more well known for something else; their immensely powerful jaws. 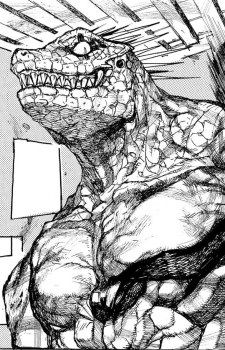 The Kaimen were originally birthed due to excessive sorcerer interference and experimentation on human populations on Enkai in attempts to perfect and create spells. Many died, but those who didn't were left twisted and malformed, or transformed beyond recognition. It is believed that many races of Enkai originated from these infamous times, but the Kaimen are undeniably the most well known products of these experiments. The original groups of Kaimen, who, at the time, weren't even recognized as such, were the first to rise up against the rampant sorcery ravaging their homeland, lead by a Kaiman who only went by "The Man Within". The foul sorcery used to create them would be their enemies own downfall, as it gave the Kaimen an innate resistance to the flood of spells they were besieged with during their war of liberation. Though it took many a generation to see it through, the war was won in favor of the Kaimen who, wanting to see no more of the foulness of magic they had seen their whole lives, slaughtered every sorcerer within grasp. Since then, they and the other races birthed with them have created a new era for their homeland and their new peoples, as the once human population has now become a diverse mixing pot full of all manners of new and unusual races.

Many Kaimen behave and think rather chaotically and physically, and typically aren't seen in careers requiring proper educations and good etiquette. Despite being the primary liberators of the Enkai people and potentially having all the rights to, they had, and still don't, have much of an interest in ruling, bureaucracy, or public affairs. Leaving those roles to the more well mannered and tempered people of Enkai, the Kaimen instead take up positions that demand more passion or strength to accomplish. Many Kaimen find the fields of freelancing and mercenary work to be exciting and fitting, while those who tend to shy away from conflict more than their peers are often seen in the culinary field. Also fitting, especially once one sees how much the Kaimen value food.

Kaimen typically act without much thought and hastily, and thus aren't best to ask for long-term decision making. This leads to them being seen as somewhat more chaotic, though some are found to have a bit more self control and respect for outside rationales. While they are often seen as good people, they can easily range from good, evil, or just neutral. One thing's for sure though; no matter their alignment, they adore food. Kaimen have to eat twice as much food as most any other race due to their insane metabolisms and massive appetites, leading to them finding a far greater value in food than most. Being a great chef is a surefire way to get to the heart of any Kaiman, and it can often be used as leverage for diplomacy.

Most Kaimen don't have true "beliefs", and think that people should just do whatever it is they wish to do, so long as it's with good reason or intention. However, this does not apply to their almost universal outlook on magic. Most Kaimen believe that magic is an incredibly dangerous, powerful, and always misused tool that should be forbidden. Seeing how it affected them previously has lead them to hate magic and most users of it, but mostly those who are born with it; sorcerers. The extent of this hatred varies, of course. Some want only to see them dead, others only wish to see them gone from their homeland, and then there's the small few who wish to make amends with those of the magic world, and perhaps even join it themselves. The latter of these three, however, are often shunned and exiled by their own kind, and are almost never found amongst them.

Kaimen names are often very similar to those of humans or reptiles, although some are named after food favorites.

Powerful reptilians with a uniquely powerful bite.
Ability Score Increase. Your Strength score increases by 2, your Constitution score increases by 1, and your Dexterity score increases by 1. However, your Intelligence, Wisdom, or Charisma score decreases by 3.
Age. Most Kaimen fully mature by 12 and live to be around 70 years of age.
Alignment. Kaimen tend towards chaotic alignments, and more typically good and neutral within that. Nonetheless, evil Kaimen have been recorded, as well as the extraordinarily rare lawful Kaimen.
Size. Kaimen are on average larger than most humans by a good foot or more and by quite a few pounds of muscle. Your size is medium.
Speed. Your base walking and swimming speed is 30 feet.
Scaly Skin. Your rough, scaly skin gives you an unarmored AC of 14 + your Dexterity modifier.
Powerful Jaws. You can use your bite as an unarmed weapon. It deals 1d6 + your Strength modifier worth of piercing damage. This increases to 1d10 at 6th level and then 1d12 at 11th level. The power of your bite also scales with your related abilities.
Constricting Bite. You have a massive maw full of teeth, and a powerful jaw to back it up. You can make an unarmed special attack with your mouth that deals 1d6/1d10/1d12 piercing damage. If you hit, you may choose to grapple the target as a bonus action.
The Man Within. Some effects of the sorcerer experiments are... less known. Deep within your maw, a small entity resides. It is capable of understanding and speaking all languages, but you may not understand what it conveys to you unless you understand the language it uses. You may choose its appearance. When a creature capable of understanding language and speech is grappled by your bite, you may have the entity ask it one question. The creature must answer truthfully or it is unable to attempt to act on its next turn and remains grappled as you sink your teeth deeper within its flesh, dealing 2d6/2d10/2d12 piercing damage. This ability can only be used in an amount equal to your total level. You must finish a long or short rest to recharge its uses.
The Curse of Experimentation. You have a resistance to ALL magic, be it beneficial or harmful. As a general rule of thumb, beneficial effects are halved rounded down, while harmful effects are halved rounded up. This can only be bypassed by 9th level spells. However, this trait is largely flexible and should be modified at your DM's discretion.
Hyperactive Metabolism. Your body requires a massive amount of nutrients to sustain itself, and as a result you must eat twice as much more than the average person. If you fail to do so, you will suffer from 2 levels of exhaustion and take 1d8 of damage from your body starting to digest itself. As an example, if most people can go for 4 days without food before they suffer consequences, you can only go 2, while also requiring twice as much food to satisfy yourself. This portion of the trait is flexible, and should be modified at your DM's discretion.
Ravenous Jaws. In a desperate attempt to satiate your hunger, you lunge at a target and tear at their flesh. Make a special attack with your bite. If it hits, it does 3d8/3d10/3d12 + your Strength modifier in slashing damage and you gain temporary hitpoints equal to your level minus one. If you're suffering from exhaustion of levels 2 or greater, you may lower the level by 1. You must finish a long rest before you may use this feature again.
Regeneration. If you lose a limb, it can automatically regrow itself over the course of 1d4 days.
Languages. You can speak, read, and write Common and one other language of your choice.