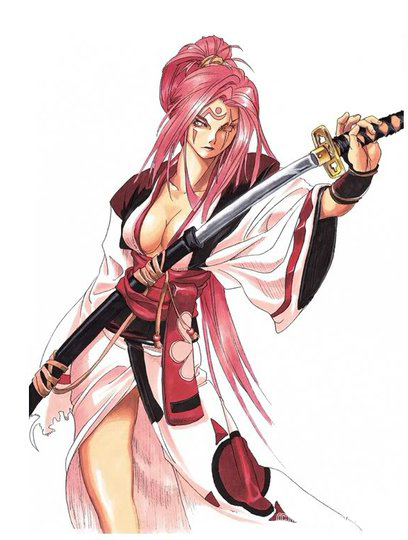 The Iaidoka draws her blade.

The Iaidoka is a practitioner of Iaido, and has begun to seek mastery in the art of drawing the blade. Iaidoka are often controlled individuals who seek the balance and precision in the practice, and therefore incorporate it entirely into their battles, often appearing as calm and collected individuals, seemingly unconcerned with the battle around them, reacting with lightning fast strikes of steel, sheathing and unsheathing their blades in a single stroke. In the Ashen Coast, Iaidoka are often Samurai who have become masters of their weapons, and naturally, wish to also become masters of themselves. They are often the heads of their schools, guilds, or clans, or a senior disciple, if they belong to one, and are considerable assets to any organization or nation that might join their service.

Iaido is largely considered to be used for counter-attacking, or to attack in surprise, as it is comprised of strikes which begin with the sword in the sheath. Those who truly study Iaido, however, use the art to control themselves, not their opponents, and use the precise, quick strokes to master their bodies and reactions. Iaidoka are those who have begun to completely master these factors, and therefore, have become efficient, quick, and subtle swordsmen, some even able to unsheath, strike, and sheath their blade before their opponent can blink; All of this, while remaining calm and composed.

Samurai in the Ashen Coast study Iaido as they learn to wield their weapons, often as it is considered a fundamental art. Those who seek further understanding and mastery may often become Iaidoka. While these are the most typical examples of Iaidoka in Tirr, any class with the appropriate skill and dedication can become Iaidoka.

Because of the fundamental requisites of Iaido, chaotic characters cannot master it, lacking the ability to maintain the type of dedicated, orderly focus for long periods of time, which is necessary to become a true Iaidoka. Those without the ability, natural or developed, to draw quickly from the sheath, cannot become Iaidoka, as they lack a fundamental skill of the art. Furthermore, the potential Iaidoka must be experienced in combat, and have some ability in physical striking, as understanding of strikes against the flesh is necessary for training, as most exercises utilize imagination and concentration.

All of the following are class features of the Iaidoka.

Unassuming Posture: The Iaidoka studies the art of drawing the sword, and as such, must have her weapon sheathed in order to use the unique class features Flash of the Blade and Counterstrike. These features must also used with a Martial or Exotic Slashing weapon. This posture also provides the Iaidoka a bonus to Bluff and Concentration checks in battle, equal to her Iaidoka level.

Flash of the Blade (Ex): At 2nd level, an Iaidoka begins to employ the precision and power of Iaido in an offensive application, designating her following action as a Flash of the Blade. When the Iaidoka's weapon or weapons are sheathed, she may perform a full-round attack action on an adjacent opponent; During this action, the Iaidoka takes a cumulative −4, with an additional −2 for every attack she makes (For example, a Iaidoka with three attacks would take a −4 penalty on the first, a −6 on the second, and a −8 on the third). If all attacks strike the target without failure, the last attack is treated as a critical hit, requiring confirmation.

At 6th level, the penalty of using Flash of the Blade is reduced to a cumulative −2 (With the same example, −2 for the first attack, −4 for the second, and −6 for the third).

At the 10th level, the Iaidoka's mastery of Iaido is complete, and the flurry of blades becomes nigh invisible to untrained eyes. The final attack is considered a critical hit, and must be confirmed, as before; However, the Critical Multiplier for the attack is multiplied by the amount of attacks made, if all are successful (As before, if all three attacks succeed, and the last attacks critical multiplier is ×3, then 3 + 3 - 1 = ×5).

Improved Quick Draw: At the 2nd level, the Iaidoka may sheath her weapon as a free action, but only on her own turn.

Counterstrike (Ex): At 4th level, the Iaidoka can react to an enemies attack, striking back at them on instinct. If an enemy attacks the Iaidoka in melee range, the Iaidoka may roll a Concentration check to focus all her speed and power into a quick counterstrike. The DC for this check is equal to the 10 + Enemy HD + Enemy's Dex modifier. This is considered an Attack of Opportunity, and is subject to the same limitations per round.

Combat: The Iaidoka is a strange class in combat; They are not frontline fighters, in mentality, but are powerful and strike quick and painfully. The Iaidoka goes where she is needed, and is a thoughtful warrior, but never allows themselves to become distracted by any one threat for too long.

In Life: An Iaidoka never ceases to practice her Iaido, nor fails to meditate on past battles, seeking to perfect her art. They are calm strategists in what appears to be a tumultuous current of life, flowing around them as a river does a rock. They are revered by aspiring Samurai, and respected by lords who know of them.

Iaidoka are most common in the Ashen Coast, where the art of Iaido originated in Tirr, along with the way of the Samurai. They are often well-respected and placed in highly honored positions, such as a war-time adviser to the leading factions, or a great teacher to aspiring swordsmen. Always, they tend to find positions that allow them to exercise the calm of mind they've achieved in their understanding of Iaido.

NPC Reactions: Most NPCs act within a range of admiration for the Iaidoka. Commoners may watch an Iaidoka practice without offending the Iaidoka (They are viewed as a distraction to be tested with, by the Iaidoka), and gasp and cheer as the peerless skill of the Iaidoka is displayed. Barons and Lords may attempt to take Iaidoka on as Bodyguards, as such as swordsman is highly desired. Barbarians respect the Iaidoka for their lethality and power, but find them to be far too flashy, and often, frail. Other classes usually appreciate the level of focus and lack of wasted movement and action in an Iaidoka.

Characters with ranks in Knowledge (History) can research Iaidoka to learn more about them. When a character makes a skill check, read or paraphrase the following, including information from lower DCs.

Iaidoka in the Game[edit]

Iaidoka are easily the calm, composed character with a skill in the finesse of the blade-drawing, and thus tend to be lithe, but agile characters. They are thoughtful, strategic, and quick to the point, as is the result of their training. While they are originally from the Ashen Coast, there is no reason that they may not wander. Every Iaidoka is a man or woman of their own might and skill, seeking mastery in their art, and wherever that might lead them.

Adaptation: Iaidoka can be utilized in any campaign, reflecting the same or similar personalities of weapon users. Typically, Iaidoka use swords, and other bladed weapons, but otherwise, they are entirely modular.

Sample Encounter: An Iaidoka is typically the easiest settled into a campaign as a strategist or warlord for a national entity, and therefore can be found in War camps or at a palace, likely training when not instructing troops or leading them to battle. Otherwise, a Iaidoka is likely to teach her art to others, and can do so in monastic environments, or even martial dojos within nations. Lastly, an Iaidoka can be found wandering the world, seeking challenges to assist her in pursuing even higher precision and testing her capability in the way of Iaido.