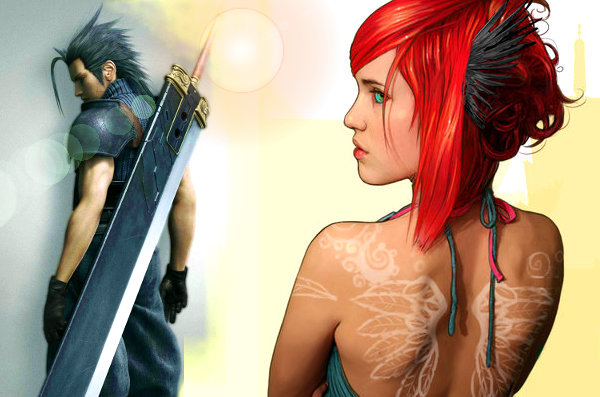 Half human, half magic

Hybrid Elites are half mortal, half green magic. At some point in their lives, Hybrid Elites were infused with strong amounts of arcane energy. This painful infusion of potent magic can show physically in many ways such as scars or abnormal features (such as brilliant green eyes). The powerful energies that now course through a Hybrid Elite's body grants them unnatural feats of strength. Hybrids can move quickly in the heaviest of armor and perform long acrobatic leaps. They favor using large two-handed weapons to maximize their crushing power. Their physical frames also hide a great deal of their prowess and they often look no different from any other athletic member of their native race.

No two Hybrids are alike and each possesses a different set of talents and skills. Even so, they can almost always be found serving in military duties around the world. They enjoy serving and protecting, always giving merit to becoming a hero. Of course, there are always a few black sheep. They are the exception, not the rule. Good or bad, law or chaos, they fight for their dreams and for their honor.

Developed to make potent use of all things Strength-related, a Hybrid becomes exponentially more powerful as they progress in level. When working with a party, it is important to remember that Hybrids do not possess the many feats and options of a fighter; they don't shield others well, command ground, use trip attacks, or do karate. They hit. They hit hard. And they kill monsters. That's it. This simplified approach, however, can make them a good option for first time players.

Hybrids have only one primary ability and can select six of their class skills. This being the case, it is always recommended to have a higher Constitution score than your subsequent Intelligence score. Hybrids are warriors first and craftsman last.

The following is designed to help you build a Hybrid Elite Warrior:

All of the following are class features of the Hybrid Elite Warrior:

Might: "You can move your body mass in a split second."
You can trade your Dexterity modifier to AC for your Strength modifier at will. This bonus is also added to your Armour Class.

Wingless: "Gravity is your pillow and you always land on your feet."
You can make a Balance check (DC 10) to negate all falling damage as an immediate action.

Grip: "You're a master of leverage in combat."
You gain 1-1/2x your Strength modifier to damage when using a two-handed weapon.

Leap "You gain the ability to leap amazing distances, allowing you to jump up to 60ft in the air. Jumping 40 or more feet results in the user being Shaken upon landing."

Power attack: "Shifting your stance gives you a stronger hit with less accuracy."
You gain the Power Attack feat.

Determination: "Your arcane power manifests within you."
Every time you gain this ability you gain a +2 to your Dexterity score.

Lightweight: "Your body is easily able to move the greatest of weights."
You can move at base speed in any armor and any items you carry are at half of their regular weight.

Power critical: "This critical blow makes anything a weak spot."
You gain automatically confirmed critical hits for the following attack roles; 5th level: 19-20. 10th level: 18-20. 15th level. 17-20. This attack is always taken at a 3x multiplier regardless of the weapon used.

Fusion: "You are a perfect fusion of mortal and magic."
You gain 1/2 of your Dexterity modifier to all saves besides reflex. This replaces all other ability bonuses.

Aerial blitz: "You are a dangerous threat to land and sky."
You gain a Blitz Height of 30 feet. You may leap in a straight line, in any direction, as a move action. This movement ignores difficult terrain and does not provoke attacks of opportunity. All your following attacks, if any, are treated as a charge; you gain a +2 to hit and a -2 to armor class for one round.

You cannot exceed your Blitz Speed with this ability.

Sprint: "You tend to run everywhere you go."
You can run at five times your base land speed.

Haste: "Fast is good."
Three times a day as a swift action you can summon the effects of the Haste spell upon yourself for one round per Strength modifier.

Weapon option: "Your hand-eye coordination is flawless and you can use your weapon to block arrows."
You gain a +2 deflection bonus to AC against ranged attacks. At the beginning of your turn, you may trade this bonus for a 2d6 sneak attack damage as a swift action.

Soldiers charge: "You can attack with faster-than-lightning speed."
Whenever you charge you can make a full attack. This can also be used with any aerial abilities. This does not stack with similar effects or feats.

Improved aerial blitz: "Your skills improve by leaps and bounds."
You gain a Blitz Height of 60 feet. This ability functions just like Aerial Blitz except:

You may change direction once, while leaping, when you come into contact with a solid surface from which you can pivot yourself. This surface can include the ground. You cannot exceed your Blitz Speed with this ability.

Resist: "You can endure any climate."
You can always move and attack as if under the influence of the Endure Elements spell.

Shockwave: "Your critical attacks create a wave of destruction."
Whenever you gain an automatic critical hit all opponents within 15 feet of your target take half damage from that attack. You can gain this bonus multiple times a round.

Freedom: "You're completely unstoppable!"
You can always move and attack as if under the influence of the Freedom of Movement spell.

Greater aerial blitz: "Your battles can reach impossible heights."
You gain a Blitz Height of 90 feet. This ability functions just like Aerial Blitz except:

You may now change direction twice while leaping, when you come into contact with a solid surface from which you can pivot yourself. This surface can include the ground. You cannot exceed your Jump Speed with this ability.

epic weapon option: "You're a master with a weapon."
You gain an additional +2 to AC against ranged attacks. At the beginning of your turn, you may trade this bonus for 4d6 sneak attack damage as a swift action.

epic brute strength: "Your arcane powers manifest with vigor."
You gain a +1 to your Strength score. You also gain an additional +2 to Strength checks.

epic aerial blitz: "You are at home just flying through the air."
You gain a Blitz Height of 120 feet. This ability functions just like Aerial Blitz except:

You may now change direction twice while leaping, when you come into contact with a solid surface from which you can pivot yourself. This surface can include the ground. You cannot exceed your Jump Speed with this ability.

Combat: Melee Combatant. Damage output is your specialty. To maximize your crushing power, it is recommended you gain an exotic weapon proficiency, such as with a fullblade.

Advancement: Multi-classing can add breadth to your vertical progression.

Hybrid Elites in the World

The Hybrids are not born fighters. However, when they attain their unnatural strength and speed they make excellent swordsmen. Nearly every known Hybrid got their start through the military lifestyle.

Notables: There are very few known hybrid elites among all the races.

Characters with ranks in Knowledge (local) can research the Hybrid to learn more about them. When a character makes a skill check, read or paraphrase the following, including information from lower DCs.

Hybrid Elite Warriors in the Game

Hybrids are soldiers and mercenaries of diverse races and backgrounds. They can be found all over the world in very small numbers. Always noticeable with a large weapon hung from their back and slight physical abnormalities. The Hybrid is able to crush the strongest foe with their god-like strength. Players of this class will have a great time smashing heads.