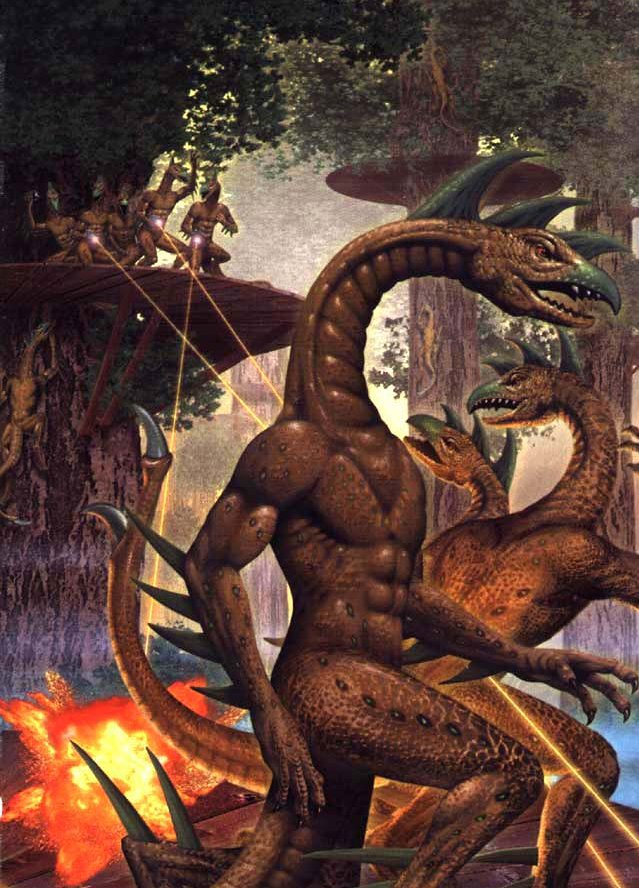 The hork-bajir are bipedal, have strong reptilian bodies with dark green-black leathery skin, and at least two hearts. Stronger ones can have up to four or five. They have snake-like necks with a sharp beak at the end of their narrow heads, tyrannosaurus-like feet, three claw-tipped fingers and a thumb on each hand, and measure to a height of seven feet in adulthood. Their most notable feature is that they have huge, long blades all over their bodies; elbows, wrists, feet, legs, head, and tail. Male and female hork-bajir are told apart by the number of blades on their heads, as males have three blades while females have two.

There existed once a race now extinct, known as the arn. They created and bred hork-bajir to be the tenders for the trees of the planet. When the parasitic slug race of alien yeerks began conquest, they first came to the homeworld of the hork-bajirs. These hulking creatures looked to be the perfect warriors and so the slugs entered and enslaved them. The andalites, sworn enemies of the yeerks, feared the other hork-bajir being possible hosts of the yeerks and so sterilized the planet with a virus, wiping out all the free hork-bajir.

It seemed to have been the end of the hork-bajir. But their chronicles tell of their survival by a single member of their race who encountered a shapeshifting andalite. The andalite took the shape of the hork-bajir and the two fell in love. They sired a child, who came to be known as a seer. From this line of hork-bajir, the race narrowly escaped extinction. Later, after being rescued by the animorphs, they were granted a hidden valley to populate and call their own. They now live as a free race under the protection of the local planetary government.

Hork-bajir are a peaceful race, despite their appearance, which can be described as a walking weapon. Their blades are actually used for cutting the bark that they eat off of trees. These trees provide them both their food, and their homes. Their homeland was home to several deep caverns, in which monsters crept. Their culture eventually came to worship the darkness that enveloped the caves, calling it Father Deep, as well as worshipping the sky, whom they called Mother Sky. Their society is made of loosely organized tribes, surrounding a tribal tree, with the elder hork-bajir tasked with leading. However, if a seer is born, they become the leader due to their intelligence. The seer is a hork-bajir born only in one of a thousand infants. It is the last shred of intelligence the arn could not get rid of in their designated gardeners.

Hork-Bajir names often follow the scheme of 1 syllable for the first name and 2 syllables for the last name.

A dinosaur-like, bark eating, pacifistic race
Ability Score Increase. Your Strength score increases by 2.
Age. They usually reach maturity around the age of 3. Naturally they will live to be about 40 or 50 years old
Alignment. They like to drift freely without thought and so are chaotic.
Size. Hork-bajir reach a height of 8 feet easily. Your size is Medium.
Speed. Your base walking speed is 30 feet.
Darkvision. You can see in dim light within 60 feet of you as if it were bright light, and in darkness as if it were dim light. You can't discern color in darkness, only shades of gray.
Bladed Claws. The arn gave the hork-bajir claws to climb and cut tree bark. You have a climbing speed of 20 feet due to your claws. In addition, your claws are natural weapons, which you can use to make unarmed strikes. If you hit with them, you deal slashing damage equal to 1d4 + your Strength modifier, instead of the bludgeoning damage normal for an unarmed strike
Languages. You can speak, read and write in Common
Subrace. Choose either the Normal or Seer hork-bajir subrace.

The common hork-bajir gardener needs to be tough to withstand falls and stray claws, making them an ideal shock trooper. However, they focus on the simpler things in survival and are gentle giants.

Ability Score Increase. Your Constitution score increases by 1.
Tenacity. You can heal up wounds better to fight again. If you would regain hit points using a hit dice during a short rest, you can regain the maximum amount of hit points. You must finish a long rest before using this trait again.
Unfazed. You are sadly one of the ones the arn weeded the intelligence out of. However, this greatly helps in playing poker face because a blank mind cannot be read. Wisdom (Insight) checks roll against you with disadvantage.

These rare hork-bajir sport a mutation that allows for insane intelligence. They are said to be capable of seeing the future under perfect circumstances.

Ability Score Increase. Your Intelligence score increases by 1.
Mind Ward. Unlike the other hork-bajir, you are not easy to enslave. You have advantage on saving throws against being charmed.
Elephant's Memory. You are able to recall any event you saw or heard of within the last month.