The Hivers of Kenshi have always had my attention on them since I saw the game, from their goofy looks to their odd society. I enjoyed playing the game and one of my characters was named after one of my Kenshi characters. I decided to create the Hivers as best as I could into the D&D world, giving each subrace their own unique ability scores and abilities. Some are simply spliced together feats, while the others are off the top of my head. I am taking criticisms and suggestions to anything that may seem under powered or over powered, or anything that may need grammatical changes. 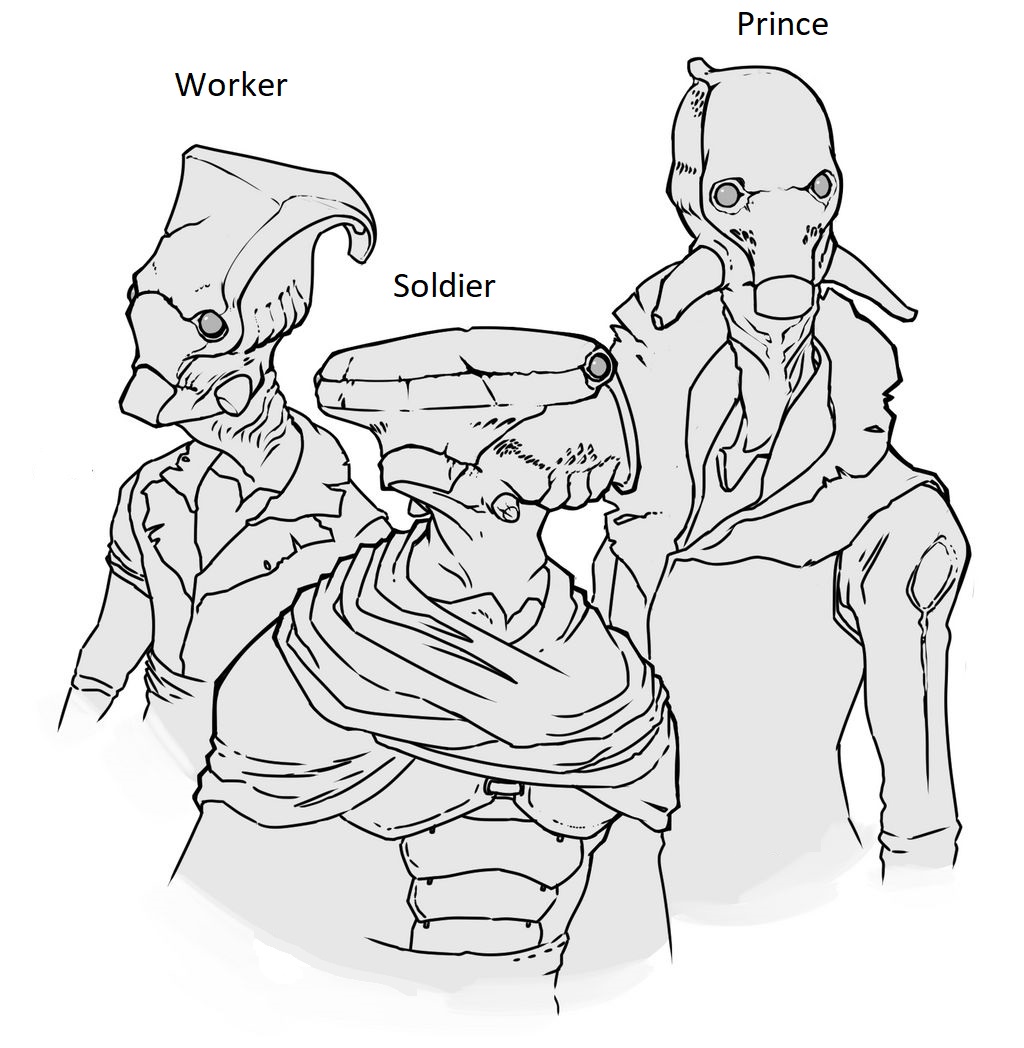 Here is a representation of some varied Drones. Source

Each drone is different from one another, Even the exoskeletons vary from drone to drone. the only similarities each drone has is the armored layers of exoskeleton and mucous covered flesh beneath. They have no feet, walking on tapering points, each drone is male, the only females of this race are known as queens.

Prince Drones: Rounded heads with forward facing eyes. These drones have exoskeletons more fore adornment than protection. The princes are the smallest of the drones, with a thinner, more agile frame.

Soldier Drones: These hivers are heavily built and larger than any other drone. The Soldier drones have a head shaped like a hammer head shark. Their eyes are on each side of the head, and the exoskeleton is thicker on their head than any other plating.

Worker Drones: The lowest of the castes, the worker drones are the medium build of the drones, they have moderate exoskeletal plating and moderate muscle mass. Their heads are shaped like vertical rectangles, with eyes placed on the sides of their head.

No one knows what plane of existence the hive came from, nor is there any historical records that the race themselves have kept up with. These beings are of little culture and live only to serve their queens. The only known thing about them is that they showed up in recent years in the deserts of the forgotten realms, the desert of Anauroch, Shaar, and the black ash plains. Their society thrives off of Caravans and the hives all have different societies within them. 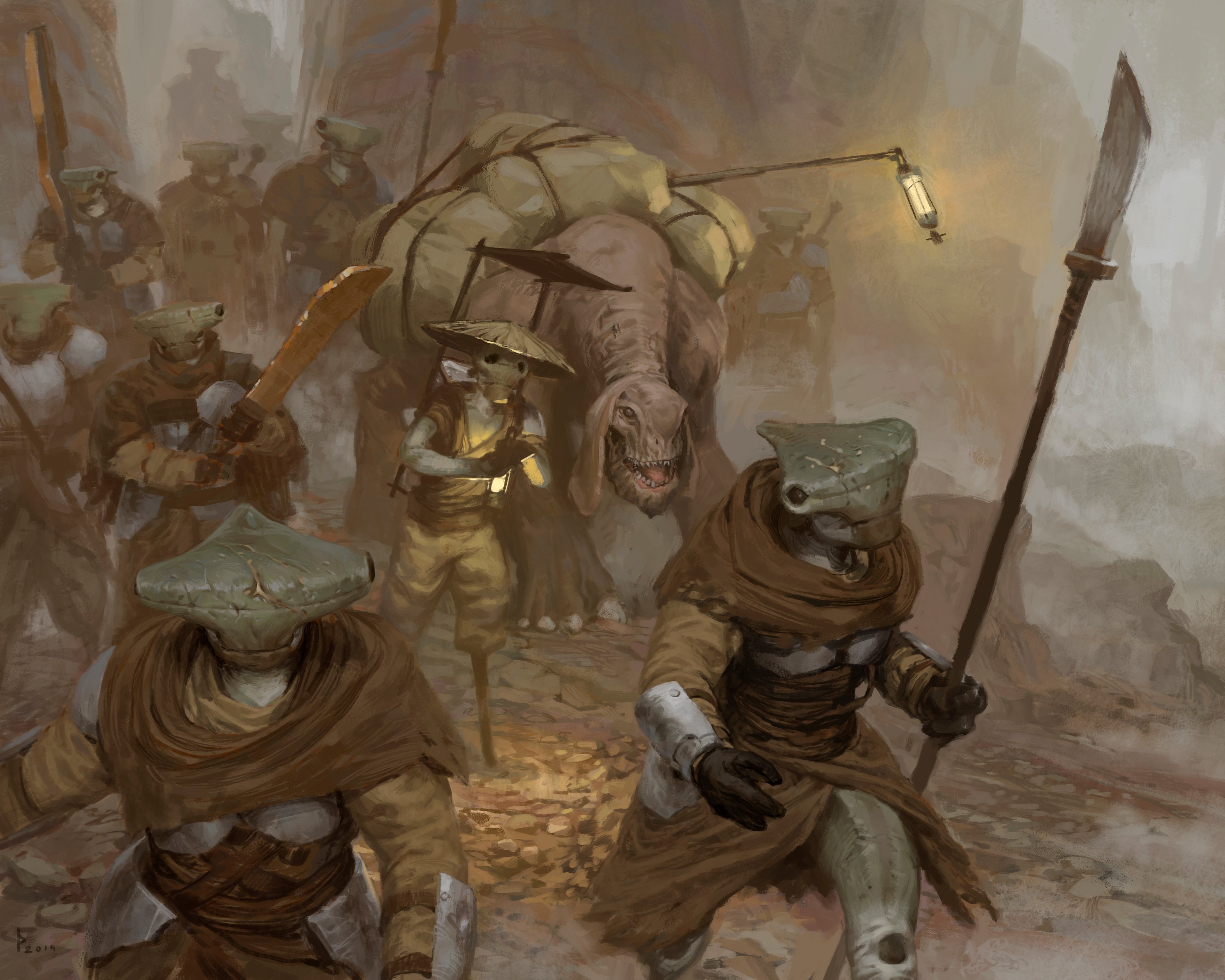 The Hive, also known as Hivers, are a Race of stick-like humanoids who are meant to collaborate under a collective mind, ruled by a Hive Queen and her princes. Hivers are separated into many subspecies with their own unique appearance and traits. The majority of the Hivers care for little else other than the Hive's happiness and survival and are willing to give their lives for the Hive as a whole. The queen is the sole purpose that these creatures live another day, they eat, sleep and breathe for their queen, this is due to a pheromone the queen releases.

The longer a Hiver is separated from their Hive, the more their bond with it will weaken, giving way to an increased sense of will and a lack of purpose, although some of them will instead die, this is due to a withdrawal of the pheromones, which they become dependent on. Once the bond breaks completely, Hivers cannot return and are considered "Hiveless" or "Lost Ones", as they are no longer connected to their Queen's pheromones. The Hiveless have complete free will and individuality, although they will feel purposeless and depressed, now that they have independence. Princes that are still connected to their Hive will become distressed at the presence of a Hiveless in their vicinity, and if possible, alert any nearby Hive Drone if the Lost One refuses to leave.

The homes of these creatures are built from a wax made in a special organ, they chew up wood chips and other detritus and turn it into a paste that can be molded and sculpted into the desired huts that these creatures live in. There are two main Hives The Eastern and Southern Hive.

The Eastern Hive is the friendliest of the two, and are the main caravans you will see out in Faerun, they originate from the desert of Anauroch. The Southern Hive is a Violent and aggressive hive, with strong Xenophobic tendencies to anyone from the "faraway" as they call the outside world from their territory in Shaar.

Then in the Black Ash Plain is the Dead Hive. The Dead Hives of the Black Ashe Plain are with out a queen, society, or individuality. These poor hiveless wandered too far and ended up with a degenerative disease that causes the brain to fall into base instincts, cannibalistic, numerous, and driven insane, these Hivers are frail and weak, to make up from this, they travel in numerous numbers.

Normally, hivers do not have a concept of individual names, but the Hiveless do, and usually give themselves a name.

The Hivers of Kenshi have been made into a playable race in D&D!
Ability Score Increase. Your ability scores are decided by your subrace.
Age. Hivers live up to 40 years, and reach maturity by age 6-10.
Alignment. Hivers tend heavily towards neutral alignments, if only slightly leaning to lawful.
Size. Hivers stand any where from 5 feet to 7 feet Dependent on the caste, your size is medium.
Speed. Your base walking speed is 30 feet.
Exoskeleton. When you aren't wearing armor, your AC is 13 + your Dexterity modifier. You can use your natural armor to determine your AC if the armor you wear would leave you with a lower AC. A shield's benefits apply as normal while you use your natural armor.
Gastric Fluoroantimonic Acid. Due to the highly destructive acid in your digestive tract, you can consume any organic material to fulfill your daily food requirement with no ill side-effects.
Stilt Walkers. You ignore the effects of difficult terrain.
Languages. You can read, speak, and write Common and one other language of your choice.

Ability Score Increase. Your Dexterity score increases by 2.
Chameleon Carapace. As a bonus action, you can change the color of your adaptive carapace to match the color and texture of your surroundings. When you do, you have advantage on Dexterity (Stealth) checks made to hide until the start of your next turn.

Ability Score Increase. Your Strength score increases by 2.
Headbutt. Your thick skull is a natural weapon which you can use to make unarmed attacks, dealing 1d4 + your Strength modifier bludgeoning damage on a hit. When you hit a target with a headbutt, you can use your bonus action to shove the target.

Ability Score Increase. Your Constitution score increases by 2.
Resilience of the Hive. Your hitpoint maximum increases by 1, and it increases by 1 again every time you gain a level. Additionally, You have advantage on saving throws against being poisoned.