The Higardi are a race of humans who are descended from a demi-god as the father of their race, and a nymph as the mother of their race. This has given the men and women of the Higardi exaggerated gender differences. The men tend to be very strong, logical, and devout; the women are charismatic, agile, and have a far greater chance of having sorcerous abilities. It is also true that the men tend to be more violent and concerned with issues of civilization (especially theology and architecture, two areas in which the Higardi excel) and the women are peaceful and nature-loving. 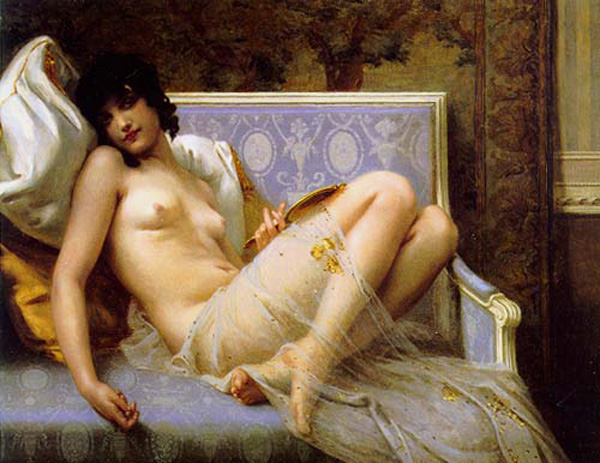 The Higardi women are well-renowned for their beauty.

Higardi are human and appear that way, but the differences between the genders is great. The men are all as strong and tough as soldiers and are natural scholars, and the women are beautiful beyond the standards of all other human women, and graceful to the point that balancing acts which would be acrobatic for other humans come naturally to the women. In addition, the men have a tendency to enter into religious professions, giving the Higardi some of the best clerics anywhere; the women have a higher than average chance of manifesting inherent magical powers, granting some of the finest sorceresses around to the Higardi. The difference is that the men can all be clerics if they wanted to as long as they work for it; the women are selected at random by fate the be sorceresses regardless of work, so their own merit or effort counts for nothing.

The Higardi military is more effective than most human forces; the men having the strength of a half-orc and the constitution of a dwarf is very helpful. The women aren't allowed to join the regular armed forces, but they do serve as healers for the military, as well as provide some magical support.

The Higardi live in an empire which controls several other surrounding humanoid areas. Their capital is a huge metropolis with many different communities, markets, courthouses, fortresses, massive walls, shipyards, parks, temples, and government buildings.

The men are typically farmers, herders, soldiers, priests, monks, scholars, wizards, philosophers, theologians, lawyers, politicians, architects, smiths, sailors, merchants, scribes, and other similar professions. The men are richer than the women, both in income and in savings (especially the latter.)

Any outsider observer can tell that there is a dichotomy between the logical men and the emotional women; the men insist that life be governed by reason, logic and a universal natural law, while the women desire that it be ruled by emotion and one's desires and impulses.

The dichotomy can be easily explained by the differences in heritage; the women desire a life in the wild because of the nymph who was the mother of the race, whereas the men are closer to the divine due to the fact that the father of the Higardi was a demigod. Higardi women in the capital city typically experience disproportionally higher levels of stress and anxiety than one would see in almost all other human women, and families that have the money to do so usually own a country house to live in during the summer for the sake of the family's women, who are happier there.

The Higardi typically get along well with other races. Outside observers might think the men are too strict and violent (or well-disciplined), while the women are often thought of as debauched and promiscuous (or "liberated.") In an adventuring party, the men are likely to be cooperative and know their place in the group, fitting in like a perfectly-fitted gear in a machine; the women, by contrast, are likely to complain loudly of any problem they have, demand to rest frequently, and if under stress, the women are likely to get angry at the male members of the party for little reason.

Most Higardi men are lawful, good, or Neutral. The women are often neutral in all ways, but are evil more than good, and far chaotic more than lawful. This has led to the men to prefer a state of order, law, finance, uniformity, and organized religion. The women don't typically care about the state and society has to force them to act against their natural tendencies to be able to live in a civilized society; otherwise they'd all run off and live in the wilds (sometimes this happens when a Higardi woman is very stressed or manifests sorcerous powers; these women have formed bands of sorceresses in the countryside, far from the central government.) The men view the women as deviant; the women view the men as oppressive. The men are in control of almost every major social institution (the government, the official religious structures, the economy, the military), a fact which the often anarchistic women resent.

The Higardi live on plains and grasslands. Areas along rivers are frequently filled with villages and towns, along with an occasional city. Monasteries are located in more distant areas, such as hills, mountains, or other isolated areas.

The Higardi worship a pantheon of gods, with the men focusing on a central deity of good and order with lesser deities beneath, and the women focusing on non-hierarchal deities of the elements and spirits of the dead. Cassia is popular with the women. The men say that the women focus too much on religious ceremony and not enough on substance or consistent theology, while the women say that the men's religion is repressive and too strict.

Of the two religious paths, only the men's path has official sanction, and is considered to be the state church. While worship of other religions is tolerated, only the state church gets full governmental support and cooperation. The most divisive religious factor among the Higardi is the belief that one day their race will join the gods; this is called the Ascension. The men want to join the gods; the women want to inherit the world and stay with nature, not heaven. The female's attachment to the world is so great that any one of them with significant magical powers is likely to return after death as a spirit, ghost or shade.

Surnames are passed down on the males side, and regular human names (like John, George, Mark, Adam, Jason, or Anthony) are used for the men. Women usually have names that descend from nature (like Flora) or are named after some mythological figure (like Helen.)