Born to serve Malebolgia, Hellspawn are the foot soldiers of Hell's army. 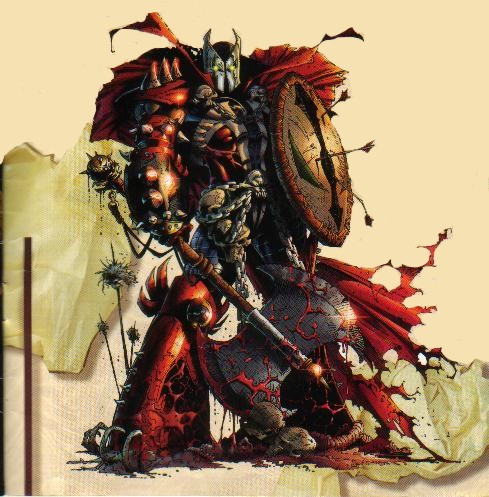 Hellspawn are Humanoids that have been promised their heart's desire if they swear allegiance to Malebolgia, the supreme master of Hell, and serve in his army during Armageddon. Such a creature is not always evil. But only the damned are ever present in Hell, and so there exists no Good Hellspawn. A Hellspawn is often selected from among Humans, Elves or Orcs. Never from anything smaller than a Dwarf, and rarely from any creature much larger than a troll.

This is an acquired template, and is only applied to Humanoids.

A Hellspawn's size remains that of the base creature, however, whenever it would be advantageous, a Hellspawn can be considered one size category larger.

Regenerative Healing Factor: Hellspawn gain 1 Health Per round. At level 5, and every 5 levels gained after, the amount of gained health per round is increased by 1.

Black Energy Transferal: If there are creatures/characters/etc. with an "Evil" alignment within 60 Ft. of a Hellspawn, he/she gains an additional 1 health per round

Creature of Evil control: Hell spawn can control the actions of creatures of darkness and sin, such as wolves, rats, and bats.

Near-Immortality: as long as the head of a Hellspawn is intact, they cannot die. If they are reduced to 0 hit points, they are still knocked unconscious

Flight: Hell Spawn have the capability of flight with their cape, and can fly at twice the creature's base land speed

Phasing: A Hell Spawn is able to phase through walls up to D6 times a day

Shape shifting: A Hell Spawn is able to use their cloak to transform into anything/anyone of their size class once per day for 1D6 hours

Superhuman Reflexes: Hell Spawn get +2 to all Reflex Saves

Superhuman Endurance: Hell Spawn get +2 to all Fortitude Saves

Superhuman Strength: Hell Spawn get +2 to all Strength checks

Same as base creature

Usually any deep, dark corner that is quiet, and will allow the Hellspawn to wallow in its own anguish.

Individual. While in its time on the Material Plane. A Hellspawn often secludes itself from the rest of normal society. Forming relations only with those who take pity on it, and refuse to let it be.