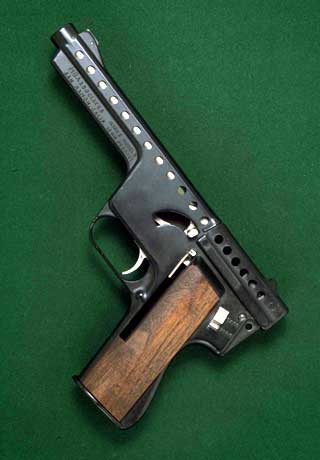 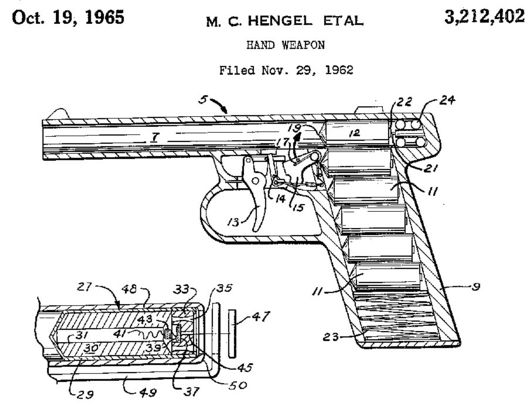 Technical drawings of the Gyrojet

During the early sixties a small company called MB Associates, founded by Robert Maynard and Arthur Bill, brought up a new weapon that was intended to revolutionize the world of small arms. Known as Gyrojet, it was sort of hand-held, multi-shot rocket launcher. It was advertised as a silent and capable to fire under-water, but in real life Gyrojet weapons turned out to be extremely unreliable and dramatically inaccurate; also, these weapons were rather ineffective at point-black distances, gaining its full power only at ranges of about 40-60 meters (yards). Few of the Gyrojet "pistols" made its way to the jungles of Vietnam in the hands of US military officers, who bought them at their own funds, but no successful reports ever appeared, and by late sixties the Gyrojet project was doomed.

Gyrojet weapon was one of the rare attempts to develop an entirely different weapon with some unique properties. This weapon tried to achieve several goals, including the low noise of firing and underwater fire capabilities, along with significant firepower and penetration. In doing so, it was far from any conventional firearms; in fact, it was a hand-held, multi-shot rocket launcher that fired "armor piercing" projectiles, made from steel and with pointed nose. Each projectile contained its own rocket engine and means for stabilization - either in the form of retractable fins or in the form of inclined jet nozzles which forced the missile to rotate, and thus provide gyroscopic effect for stabilization. Each rocket "motor" burned for about one tenth of a second.

Each range increment imposes an additional -1 penalty to hit.

This weapon may be fired underwater and into water without penalty.

This weapon is considered suppressed and cannot be silenced.

This weapon uses special ammunition which has a purchase DC of 10 for 20.

Much of this is taken from this article