"It matters not what blood you come from, nor what dust you'll become...only the tracks you leave behind on the earth, and the path that they have walked." 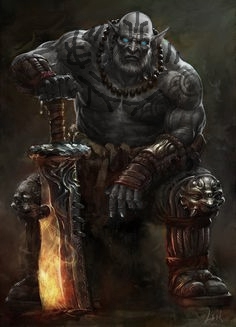 A brooding Half-Breed and his blade.

The offspring of goliaths and orcs, Golrics are truly fearsome specimens. With their massive stature, raw power, and imposing presence, they prove to be quite intimidating for even the most savage of foes. Often larger than goliaths and more thickly-muscled than orcs, Golrics are often observed performing feats of incredible strength with ease. They usually bear a mixture of their bloodlines' physical traits: the markings, coloring, and eyes of goliaths; the thickness, sharpened canines, and pointed ears of orcs. Bone structure is typically angular and solid, and about half of males and most of the females are able to grow hair. Golrics also share a mixture of their parent races' personality traits, known for having the even temper of goliaths, but subject to the powerful emotions and heightened senses of orcs.

The sad truth is that these Half-Breeds are often the result of force or revenge. Between warring tribes of orcs and goliaths, brutal displays of dominance — particularly instigated by the orcs — are certainly not unheard of (as seen in the history of half-orcs). There are cases of goliaths exhibiting similar behavior, but they are almost exclusively acting of vengeance rather than instigation. Because of the harsh nature of their conception, and the hostility they are shown from birth, Golrics tend to develop one of two ways: either with lofty ideals, trying to leave their mark on this plane and change it for the better... or with an icy, cold contempt for a world that could allow such abomination in the first place.

Seen as abominations from both races, Golrics are often abused by their societies or cast out and left to die. Pariahs even within their own cultures, most are forced into lives of servitude, oppression, or solitude. Thus, they tend to be highly distrusting of others, only ever sure of their own motivations and intentions, and each has their own way of maintaining their guard: many through silent brooding, but many through boisterous humor — however, just like most other outcasts, the half-breeds do typically long for some semblance of acceptance in the world around them... they simply try not to show it.

These half-breeds generally don't have strong feelings about any races or groups in particular, but they almost always harbor deep-seeded hatred for goliaths and orcs. They can improve relations with other races in multiple different ways. Different Golrics prefer the company of dwarves as drinking companions, some prefer the various cultures of humans, some prefer to be alone or in a small goliath/orc tribe, but they usually aren't on good relations with most races.

As most Golrics are pariahs cast out from their own societies, very few are ever found to have conventional names from either race. Occasionally, the ones kept in servitude will be given names reflecting the culture they are serving, but the rest are forced to eventually choose a name for themselves...or receive one from those they encounter in the wilderness. These can range from names they remembered from their youth (Rook, Grog, Kraven, Feng, Bron, Torg, Omec), to wild creatures they encounter (Wolf, Bear, Hawk, Phoenix, Behemoth, Spider, Bull), to descriptions of themselves or their own actions or features (Hammer, Rip, Strongjaw, Crush, Hunter, Mountain, Stonefist).

A Golric is a Half-Goliath, Half-Orc half-breed— massively powerful and scorned by their own cultures, Golrics are borne from brutal pasts into uncertain futures.
Ability Score Increase. Your Strength score increases by 2, and your Constitution score increases by 1.
Age. Typically, a Golric can live for more than nine decades but rarely more than a century.
Alignment. Being outcasts and on their own from as early an age as they can remember, most Golrics tend to have a chaotic disposition, with a strong sense of self-importance. They can range across the spectrum of good and evil, often dependent on their oldest memories of treatment or their first encounters with other societies.
Size. Golrics are always thickly and densely muscled, but can vary in size quite significantly due to their inconsistent genetics: examples fit anywhere between 6 and nearly 9 feet tall and weighing between 240 and 400 lbs. Your size is Medium.
Speed. Your base walking speed is 30 feet.
Darkvision. You can see in dim light within 60 feet of you as if it were bright light, and in darkness as if it were dim light. You can't discern color in darkness, only shades of gray.
Powerful Build. You count as one size larger when determining your carrying capacity and the weight you can push, drag, or lift.
Aggressive. As a bonus action, you can move up to your speed toward an enemy of your choice that you can see or hear. You must end this move closer to the enemy than you started. After you use this trait, you can’t use it again until you finish a short or long rest.
Mountain Born. You’re acclimated to high altitude, including elevations above 20,000 feet. You’re also naturally adapted to cold climates, as described in chapter 5 of the Dungeon Master’s Guide.
Stone’s Endurance. You can focus yourself to occasionally shrug off injury. When you take damage, you can use your reaction to roll a d12. Add your Constitution modifier to the number rolled, and reduce the damage by that total. After you use this trait, you can’t use it again until you finish a short or long rest.
Natural Athlete. You have a proficiency in the Athletics Skill.
Menacing. You have a proficiency in the Intimidation Skill.
Languages. You can speak, read, and write Common, Giant, and Orc.