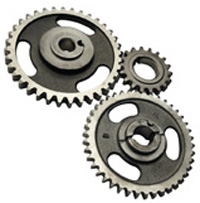 Geayer is a god who isn't that powerful but he holds a lot of power. As a construct, the core of his plane, his power is one that turns the tide in a battle and all that fight in his plane do so by his terms. He has his minions build onto his plane and repair as needed but now that his plane has reached a state that he is intent with he has focused on building into the mortal realms.

The different levels of devotion and favor affect what Geayer's followers do for him.

Clerics and any other worshipers usually follow their own paths but sometimes do minor errands. They have not yet gained enough favor to visit the silver isle and haven't been granted a gear weapon.

Clerics or other worshiper you have been granted to visit the silver isle and have been granted a gear from it. This gear may be made into a gear glaive and it holds a special bond with the island, allowing you to teleport there as a full round action (which provokes an AoO) once per month. Geayer grants this ability and it is an (Ex) ability, it cannot be used by anyone other than one of Geayer's followers.

Clerics (or any other divine caster) gain a permanant residency on the silver isle and you are also in the position where you may go out and preach to others. Your actions are now used to further Geayer's actions, getting him into greater power and expanding the silver isle. A cleric of this stature usually hunts those that oppose Geayer, this includes most druids and most of the sylvan advocates. As a higher devotee you may call in Geayer's help (no more than once per week) this grants you a shield guardian (you are classed as wearing the amulet). This lasts until destroyed, you may not have any more than one shield guardian at a time. He may also use his teleport ability once per week.

Geayer's clergy doesn't openly show itself often, in some cities there is a temple where lots of followers reside. This is sometimes due to the fact that some people don't like the followers of Geayer and also some of the other people also want to steal the power of the gear from them (even though it will not work for a non-follower).

The silver isle hosts full cities of followers and at certain points in time it has been heard that the people from the silver isle raid the mainland, including stealing, destroying and killing. This is the only temple that isn't accessible to non devotees. The temples that are built in the name of Geayer are built using the gears from the silver isle, this is the only way that anyone may truly build a temple of Geayer and it may only be built by the higher followers. Geayer's temples are never shared and have a special bond with the silver isle that allows a higher follower to use his teleport ability to teleport a group of up to 10 people. The bond also gives it limited traits from the plane of gears.

Geayer can control the gears created in his plane, this includes moving them on their axis and rotating them. He may make an attack that deals up to 1d10 damage (Reflex save DC10 to 25). He may also change the speed of any creature by rotating the gears below them, reducing or increasing their speed by up to 30ft depending on gear size. He may also control any gear that was made in his plane if it is within 30ft of another gear or within 30ft of one of his (average or higher) followers. He may not channel this power through his lesser followers as they haven't achieved the proper level of devotion allowing this connection.