“Life is a magic garden. With wondrous softly shining flowers, but between the flowers there are the little gnomes, they frighten me so much, they stand on their heads, and the worst is, they call out to me that I should also stand on my head, every once in a while I try, and I die of embarrassment; but sometimes the gnomes shout that I am doing very well, and that I’m indeed a real gnome myself after all. But on no account I will ever fall for that.” — L. E. J. Brouwer 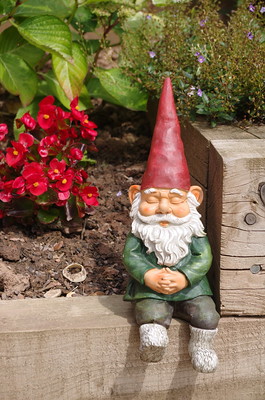 A typical garden gnome is sculpted to look like a tiny, squat dwarf—despite their name, garden gnomes almost never resemble gnomes—wearing a conical hat as tall as it is. These hats, like the rest of a garden gnome’s clothes, are part of its body and an integral facet of its identity. Most garden gnomes appear male, but they reproduce via ritual sculpting and painting, so all apparent gender differences are cosmetic. Garden gnomes most commonly use it/its pronouns, but when one adopts gendered pronouns it's not necessarily tied to his or her apparent gender.

It's no coincidence that garden gnomes (the race) look just like garden gnomes (the decoration). The first sentient gnome, Red-hat-white-beard-blue-shirt, was an ordinary ornament in a human's garden, brought to life by unknown magic. After much trial and error, Red-hat-white-beard-blue-shirt managed to create a living companion for itself, Blue-hat-white-beard-red-shirt. If the human who owned the garden noticed the increasing number of gnomes, he never mentioned it—such things tend to accrue on their own even when they’re not little creatures, after all. Since then, garden gnomes have proliferated across civilized lands wherever creatures desire to decorate their gardens.

Just like their ornamental namesake, garden gnomes live primarily in areas settled by other humanoids. They most often make their homes in gardens and similar areas where their presence can be mistaken for whimsical decorations. Garden gnomes dislike the idea of other humanoids interfering in their affairs. They have no compunctions about the reverse, but they rarely take credit for their work, allowing humanoids to believe that the chores they perform just happen magically. This had led to all manner of superstitions cropping up in communities unaware of garden gnomes’ true nature. The garden gnomes have little use for the small gifts people leave in thanks—they don’t need to eat, and their clothes are part of their body—but they treasure such trinkets anyway.

Within a garden gnome community (known as a launde), major decisions are made in community-wide meetings called gnoots. Any garden gnome can speak at a gnoot; order is kept by an elected official called a lawnspeaker, who also acts as a judge in minor disputes between gnoots. Most lawnspeakers are elderly gnomes no longer able to perform the work they were created for up to their personal standards. Actively desiring to be a lawnspeaker as anything except a glorified retirement position is considered odd at best, suspicious at worst.

New gnomes are created to fulfill a particular need. A launde will sculpt a mason gnome if they need extra hands to do stonework, for instance. Garden gnomes tend to be passionate about whatever their specialty is and enjoy their work for its own sake—though compliments are welcome too, and many garden gnomes make a habit of admining and complimenting each other’s work. Literal whistling while working is common among garden gnomes, provided no other humanoids are around to hear it.

Garden gnomes bring this same sense of joy to their leisure time. They rarely invent games of their own, but delight in trying to reverse-engineer games and sports they see other races play, including holding competitions for the most absurd rules that still reproduce a given play experience. Pranks and practical jokes are also a favorite pastime, targeting both fellow garden gnomes and unsuspecting other humanoids. A typical garden gnome finds these funny even when it’s the butt of the joke, unless its work is damaged (a high crime in garden gnome society), but may have a shaky grasp on where other races draw the line between playfulness and maliciousness.

Among themselves, garden gnomes refer to each other using combinations of three distinct physical traits. Each gnome in a community is sculpted and painted differently, ensuring that these descriptive names are unique. However, new gnomes are sometimes made in the image of deceased gnomes. Looking like, and therefore being named for, another gnome is considered a great honor. On the other hand, being sculpted in the likeness of a non-sentient garden ornament (which can happen if a launde sees one they think is particularly fetching) is a mild embarrassment.

Garden gnomes are also often assigned names by the humanoids they coexist with, and use those assigned names (which they call “big names”) when interacting with other races—whom, the stereotype goes, have trouble telling garden gnomes apart—regardless of the fact that those names are usually goofy.

Garden gnomes are little living statues who make their homes in the gardens of unsuspecting humanoids.
Ability Score Increase. Your Constitution score increases by 2.
Age. Garden gnomes are created as adults and are able to walk, speak, and otherwise function immediately after painting. Garden gnomes typically break down in 150 years or less.
Alignment. Most garden gnomes are mischievous but ultimately well-meaning, so they tend toward chaotic goodness.
Size. Garden gnomes usually stand 2’-3’ tall, including their sculpted-on hats, and weigh about 30 lbs. Your size is Small.
Speed. You have stumpy little legs. Your base walking speed is 25 feet.
Garden Camouflage. While motionless and quiet, you are indistinguishable from a non-sentient garden gnome.
Living Construct. Although they look like small “gnomes” (read: dwarves), garden gnomes are sculpted, not born. Your type is both construct and humanoid. If an effect works on at least one of your types, that effect can work on you. For example, cure wounds works on you, since the spell works on a humanoid. Due to your constructed nature, you do not need to eat or breathe, you have resistance to Poison damage and Advantage on saving throws against poison, and you are immune to disease.
Languages. You can speak, read, and write Common and Terran.
Subrace. Choose either the garden gnome worker or wanderer subrace.

Garden gnome workers are the most common type of garden gnome, making up the bulk of every gnome community. Each is made to fulfill a particular role, and they're built tough. A garden gnome worker is much stronger than its appearance suggests, able to lift several times its own weight and use even comically oversized tools and weapons.

Ability Score Increase. Your Strength score increases by 1.
Built to Work. Every garden gnome worker is sculpted with some kind of tool in hand. You are proficient with your choice of one type of artisan’s tools.
Squat Strength. You determine your carrying capacity and the amount of weight you can push, drag, or lift as if you were a Large creature. If an effect would make you Large or bigger, instead calculate these values as if you were one size larger. (For example, if you become Large, calculate them as if you were Huge.) Additionally, you do not incur disadvantage when you use weapons with the Heavy descriptor.

Garden gnome wanders, just like their worker brethren, are created for a specific purpose: To learn more about the world outside of their communities. If a creature encounters a single garden gnome in an odd place, that garden gnome is most likely a wanderer out roaming. Because of this, other races often think of wanderers as the default garden gnomes, when they’re actually quite rare, with a given launde rarely containing more than half a dozen.

Ability Score Increase. Your Intelligence score increases by 1.
Polyglot. You know one additional language of your choice.
Wanderer's Magic. In their travels, garden gnome wanderers pick up a smattering of minor magic. You know one of the following cantrips: druidcraft, prestidigitation, or thaumaturgy. Additionally, when you reach 5th level, you can cast sending. Once you have cast sending, you must finish a long rest before you can cast it again. Your casting stat for these spells is Intelligence.