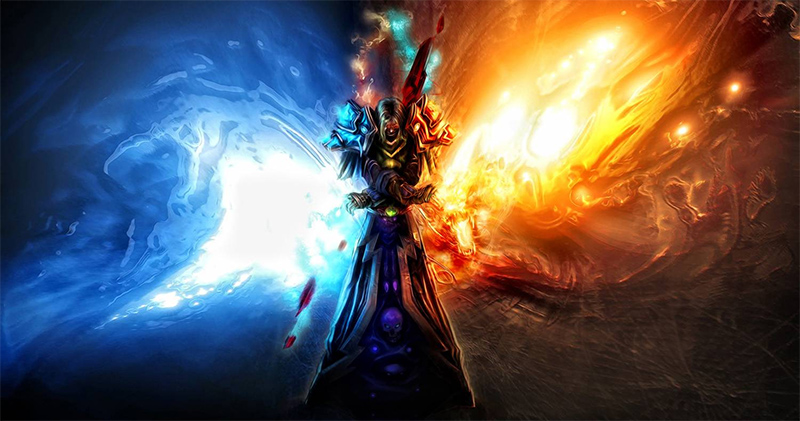 A master of frost and flame, the Frostfire Invoker conjures powerful elemental spells on the battlefield, wrecking fiery and frosty doom upon it's enemies. Their ancestry can be traced back to the first Frostfire Dragon, Shol'Khuul, who's blood is said to course through their veins.

Frostfire Invokers are strong spellcasters, excelling in Fire and Ice magic. They might not be as versatile as "regular" sorcerers, but what they lack in diversity they make up with sheer power.

Abilities: Charisma is a Frostfire Invoker's best friend, as they channel their spells throught it.

Races: Any race can become a Frostfire Invoker, but only a few are "blessed" by the Mighty Dragon's blood.

As of 1st level, a Frostfire Invoker may summon a familiar of her choice, as a sorcerer does.

At level 2, the character can create small orange (fire) or blueish flames (frost) in the palm of her hand, at will. These flames do not cause damage to other creatures, but can be used to start a campfire, light up a dark room, or simply to perform an eccentric flaming act to awe, or scare, party members.

Benefit: Spells you cast from the chosen school either gain a +2 DC to their saving throws or +2 caster level. This bonus is chosen when you take this feat and cannot be changed afterwards.

At the cost of a spell slot of two levels higher, the Frostfire Invoker may add up to half the total of the original spell damage and add fire damage to it. This can be done at will. Ex: Ellysia casts a Magic Missile at 1d4 +1, and deals 4 damage. With Arcane Power (Fire), she deals an automatic 2 extra fire damage, for a total of 6 damage. Vulnerabilities and resistances to Elemental damage is applied normally.

With every fire based spells that deal damage, the Frostfire Invoker as a chance of "burning" her opponents. The opponent must succeed a Reflex Save (10 + caster level + CHA modifier) or take burning damage (1d6 per turn) until she puts it out. Manually putting out the fire takes a full "movement action" in case of armored or scaly opponents, or a full "standard action" for robed or furry creatures.

Adds the (Frost) ability to the "Arcane Power (Fire)" to deal extra damage.

With every frost based spells that deals damage, the Frostfire Invoker now as a chance to "Slow" her opponents. A creature hit by her frosty spells must succeed a Fort Save (10 + caster level + CHA modifier) or be slowed.

An affected creature moves and attacks at a drastically slowed rate. A slowed creature can take only a single move action or standard action each turn, but not both (nor may it take full-round actions). Additionally, it takes a –1 penalty on attack rolls, AC, and Reflex saves. A slowed creature moves at half its normal speed (round down to the next 5-foot increment), which affects the creature’s jumping distance as normal for decreased speed.

At 14th level, a Frostfire Invoker's receives an ancestral blessing from her draconic master. She may choose of the following traits:

Glowing and smoking, white glassy eyes replace the Invoker's. These eyes allow you to determine a creature's alignment by gazing into their eyes.

Frosty blue and fiery orange scales appear in patches on the Invoker's skin. These scales give you +1 natural armor.

A sharp horn grows out of the Invoker's forehead. The horn serves as a natural weapon and deals 1d4 goring damage.

A long skeletal tail grows at the bottom of the Invoker's spine. The tail serves as a natural weapon and deals 1d4 slamming damage. The tail can also be used to help with balance checks as a stabilizer.

Long, leathery and skeletal frosty supernatural looking purple wings sprout out of the Invoker's back. These intimidating wings cannot be used to fly, but can be used to glide small distances or help break a fall.

Once per day, the Invoker can use a gazeous, conic breath attack. The attack does not deal any damage, but it has a change of slowing the target. The breath attack does a cone of 30ft of slowing gas (Fort DC 10 + CHA Bonus), and successful reflex saves negates the effect.

Benefit: All variable, numeric effects of an empowered spell are increased by one-half. Saving throws and opposed rolls are not affected, nor are spells without random variables. An empowered spell uses up a spell slot two levels higher than the spell’s actual level.

Benefit: You can alter a burst, emanation, line, or spread shaped spell to increase its area. Any numeric measurements of the spell’s area increase by 100%. A widened spell uses up a spell slot three levels higher than the spell’s actual level. Spells that do not have an area of one of these four sorts are not affected by this feat

Every fire based spell now also does frost damage equal to the original spell damage.

Fire spells and burning an opponent also have a chance of incinerating them. If the creature fails it's Reflex Save (DC 10 + caster level + CHA modifier) twice in a row, it is incinerated.

Frost spells also have a chance of freezing them solid. If the creature fails it's Fort Save (DC 10 + caster level + CHA modifier) four times in a row, it is frozen solid.

Creatures without souls cannot be revived, resurrected or reincarnated.

Spells: <-Delete this section if this class does not cast spells. description of spellcasting abilities: on what stat save DCs are based, on what stat bonus spells are based, and what stat determines the highest level spell that can be cast.->. <-pluralized class name-> choose their spells from the following list:

Powers Known: <-Delete this section if this class does not manifest powers. description of manifesting abilities: on what stat save DCs are based, on what stat bonus powers points are based, and what stat determines the highest level power that can be manifested.->. <-pluralized class name-> choose their powers from the following list:

Maximum Power Level Known: This column determines the highest level power he can learn at this level.

To learn or manifest a power, a <-class name-> must have an <-relevant ability-> score of at least 10 + the power’s level.

Religion: None. Why worship them when you can harness their powers?

Other Classes: Frostfire Invokers tend to want to stand out and show off their skills. They do well with tanky characters, as long as they get to be the main attraction to the show. They tend to dislike sharing the spotlight with other casters or bards.

Frostfire Invokers in the World[edit]

These flashy Invokers tend to be loners, only using "compa