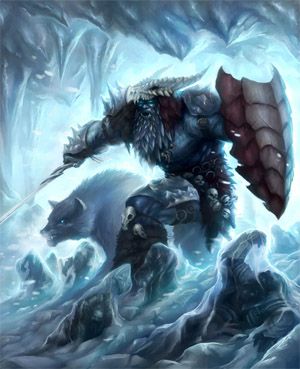 Ymir, King of The Jotun

The first living being formed in the primeval chaos known as Ginnungagap was a giant of monumental size, called Ymir. When he slept a giant son and a giantess daughter grew from his armpits, and his two feet procreated and gave birth to a monster with six heads. Supposedly, these three beings gave rise to the race of hrímþursar (rime giants or frost giants), who populated Niflheimr, the world of mist, chill and ice. The gods instead claim their origin from a certain Buri. When the giant Ymir subsequently was slain by Odin, Vili and Ve (the grandsons of Buri), his blood (water) deluged Niflheim and killed all of the giants, apart from one known as Bergelmir and his spouse, who then repopulated their kind.

Giants represent the forces of the primeval chaos and of the untamed, destructive nature. Their defeats by the hands of the gods represent the triumph of culture over nature, albeit at the cost of eternal vigilance. Heimdall perpetually watches the Bifrost bridge from Asgard to Midgard. Thor being too heavy to cross the Bifrost Bridge, often ventures into Jotunheim to get to Midgard, slaying as many of the giants as he is able on the way.

As a collective, giants are often attributed a hideous appearance – claws, fangs, and deformed features, apart from a generally hideous size. Some of them may even have many heads, such as Privaldi who had nine of them, or an overall non-humanoid shape; so were Jormungandr and Fenrir, two of the children of Loki, viewed as giants. With bad looks comes a weak intellect; the Eddas more than once liken their temper to that of children.

Yet when giants are named and more closely described, they are often given the opposite characteristics. Unbelievably old, they carry wisdom from bygone times. It is the giants Mimir and Vafpruonir Odin seeks out to gain this pro-cosmic knowledge. Many of the gods' spouses are giants. Njoror is married to Skaoi, Geror becomes the consort of Freya, Odin gains the love of Gunnloo, and even Thor, the great slayer of their kind, breeds with Jarnsaxa, mother of Magni. As such, they appear as minor gods themselves, which can also be said about the sea giant Aegir, far more connected to the gods than to the other giants occupying Jotunheim. None of these fear light, and in comfort their homes do not differ greatly from those of the gods.

Ability Score Increase. Your Constitution score increases by 2 and your Strength score increases by 1.
Age. Giants have a lifespan of a human's, multiplied by their size
Alignment. True Neutral
Size. Large (Medium is considered small)
Speed. Your base walking speed is 30 feet.
Heart of Ice. You are immune to cold damage of any kind, including magical, and you are not affected by difficult terrain if it involves snow or ice. Additionally, any attacks you make add cold to their damage type.
Frostbite. You know the cantrip Frostbite.
Thermal Vision. Your sight is based exclusively on temperature. Warmer things are redder while colder are bluer.
Languages. You can speak, read, and write Common and Giant.